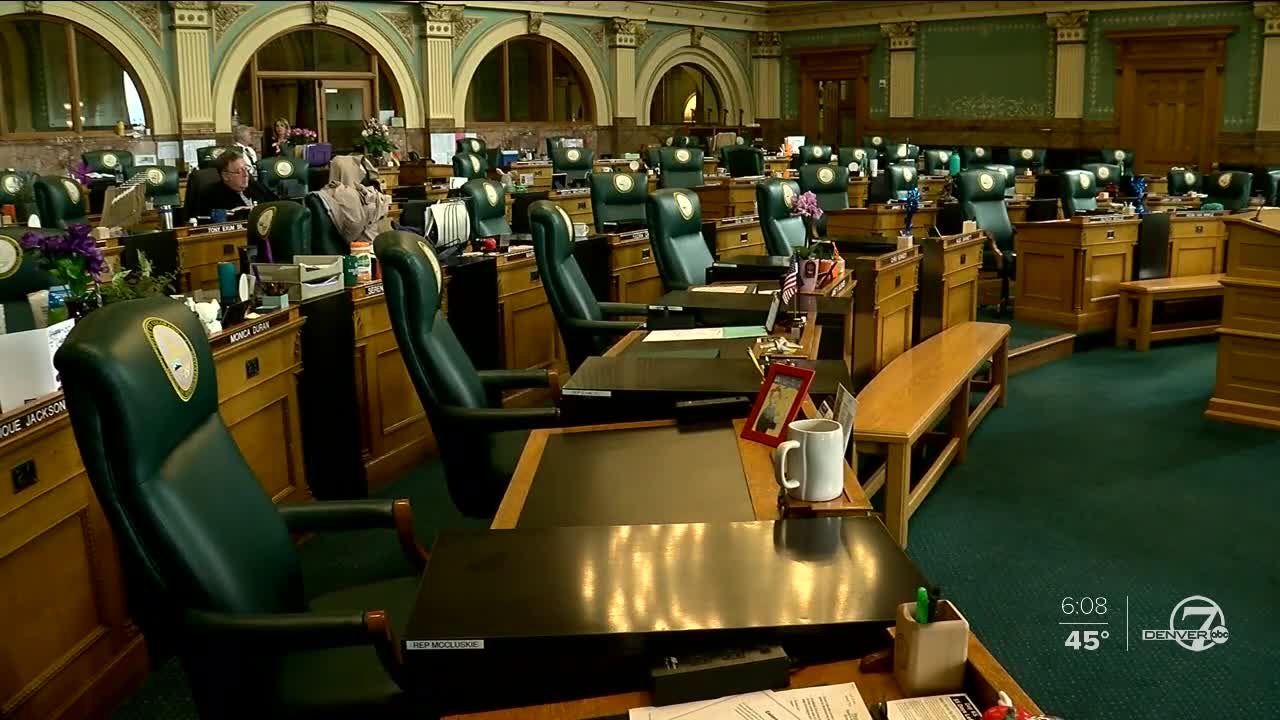 DENVER -- The Colorado Democratic leadership held a last-minute meeting Thursday to speak with their caucus members about possibly suspending the legislative session in the wake of the spread of the novel coronavirus.

Coronavirus in Colorado: COVID-19 latest updates across the state

House and Senate leaders stressed to their members during the meeting that they have not made a decision quite yet about whether to suspend the session but that the actions they take will be based on science and not in fear.

“We have not been in this situation before and so there are a lot of things that we have to figure out and that we are working on,” said House Speaker Rep. KC Becker.

Rep. Becker and other Democrat leaders implored their members to remain flexible with the scheduling, warning that the session might be extended past the May 6 end date and that they may need to come in on some weekends to work.

Republican leadership also met with their caucuses to talk about the steps that are being taken. Minority leader, Rep. Patrick Neville, believes it’s not a matter of if but when the legislature will suspend.

“My main concerns with this is the perception that we have where we are telling people to avoid public areas. This is a very public building. I think if we’re doing the public’s business, we should have the public here as much as possible,” Rep. Neville said.

This week, the Legislative Emergency Preparedness Committee also met for the first time to discuss the steps that need to take place to keep people safe.

What has to happen before the legislative session is suspended?

In order to end or suspend a legislative session, a joint resolution must be passed by both chambers by a majority vote. This must happen if the legislature decides to break for more than three days during the session.

However, the join resolution must include a date when the state legislature would reconvene. This is one of the holdups state lawmakers are trying to deal with in determining whether to suspend and for how long.

What happens when you suspend the session?

There are also legal questions about how long the session could be pushed off. The Colorado State Constitution limits the number of days the state legislature can meet each session to 120, according to article 5, section 7.

“But the constitution doesn’t say consecutive days, so it is possible that if we suspend for a certain amount of time we wouldn’t have to end it on May 6, we could actually go beyond that,” Rep. Neville said.

In article 6 section 3, state lawmakers have the ability to submit questions to the Colorado Supreme Court in an interrogatory to determine how they should count the days. The court doesn’t necessarily need to rule on it, however.

“Some people think there’s a risk that we were to just adjourn for the rest of the year and we don’t want to do that,” Rep. Becker said. “We are just trying to figure out the implications of the legislature in the middle of the session potentially going on a recess.”

However, if the session was recessed, Rep. Becker said it wouldn’t be for long.

Has this ever happened before?

Suspending an entire legislative session is not something that happens frequently.

“It is unprecedented,” Rep. Becker said.

One of the most notable public health emergencies in American history was the spread of the Spanish flu in 1918.

Up until 1950, the Colorado General Assembly only met every other year for a legislative session. During the Spanish flu, the legislature was on an off year, so nothing was suspended. The epidemic continued into 1919, but the legislature decided to meet anyway and convened from Jan. 1, 1919 through April 7, 1919, according to Denver Public Library records.

Lawmakers that year even hosted a special session to ratify the 19th Amendment, among other things.

There are several bills state lawmakers say they must pass before they could consider going into recess, including a budget, the School Finance Act and a rule review bill, among others.

Bills would require at least three days to pass. Democratic leadership says it is in the process of making a list of priority bills to try to pass before considering suspending the session.

“There are certain things we would have to pass right away and we’re looking to see if we can get those things done,” Rep. Becker said.

Another priority bill is the Ballot Access Modifications Public Health Concerns bill. The bill hadn’t even been introduced as of Thursday morning. By Thursday afternoon, the bill was introduced to an empty House floor, sent to the Judiciary Committee and set for second reading later in the evening on the House floor.

The bill would extend the deadlines for political assemblies due to public health concerns over the novel coronavirus. Those multi-county assemblies were set to take place between March 18 and April 18.

Those assemblies, which often involve large gatherings of people from the political parties in small rooms, help determine whether candidates have enough support to end up on the primary ballot. Many of the people who show up to participate are over the age of 60.

This would be a temporary measure that would not go past the end of the year. The petition gathering requirements and deadlines are the same, however, for the candidates.

The bill would provide options to the state parties to hold the assemblies either remotely or through mail-in ballots among other things.

Feeling around the capitol

The Capitol was still busy at work Thursday with school groups and tour groups visiting. Numerous others popped in to take a few pictures of the architecture and décor. Some of the committee hearings were packed while others were empty.

“It kind of feels like a ghost town in here right now. This time of year it should be packed with lobbyists,” said Suzanne Hamilton, a health care lobbyist in her 30th session at the Capitol. “I think that people are a little concerned or waiting to see what the state is going to do.”

The legislative council staff announced that as of Friday, all public tours of the Coloradoo State Capitol will be canceled until further notice.

Capitol staff also told Denver7 numerous school groups have canceled their planned tours. The Colorado Education Association, meanwhile, announced this week it was canceling its planned Day of Action, where thousands of teachers were expected to show up at the Capitol to protest low pay and ask for more education funding.

Some long-time health care lobbyists say they would like to see the legislature take a break until things calm down with the coronavirus.

“As lobbyists all talk amongst themselves, there is a general concern about probably two things, one: how do we still do the work for my clients and how do we bring our clients down here to make sure that they have a safe environment,” said health care lobbyist Edie Busam. “Number two: is there enough time to get everything done?”

There’s also a concern for their personal health and safety as they work. Already, fears over the novel coronavirus are causing some hiccups for lobbyists.

“We’re in the people business and it’s definitely hard to make that connection with people when you can’t have that close distance or interaction,” said health care lobbyist Emily Viles.

Busam would prefer to see the Capitol limit the number of visitors coming in for everyone’s safety.

“We know it’s the people’s house, we’re all aware of that, but I just think limiting it to the people who are actually working here and then being very selective with the people who come down to testify on certain issues,” Busam said.

However, they say there’s so much that needs to get done that it’s essential for lawmakers to come back after a temporary break.

For now, state lawmakers are telling their caucuses to be flexible with schedules and not to come to work if they are sick.