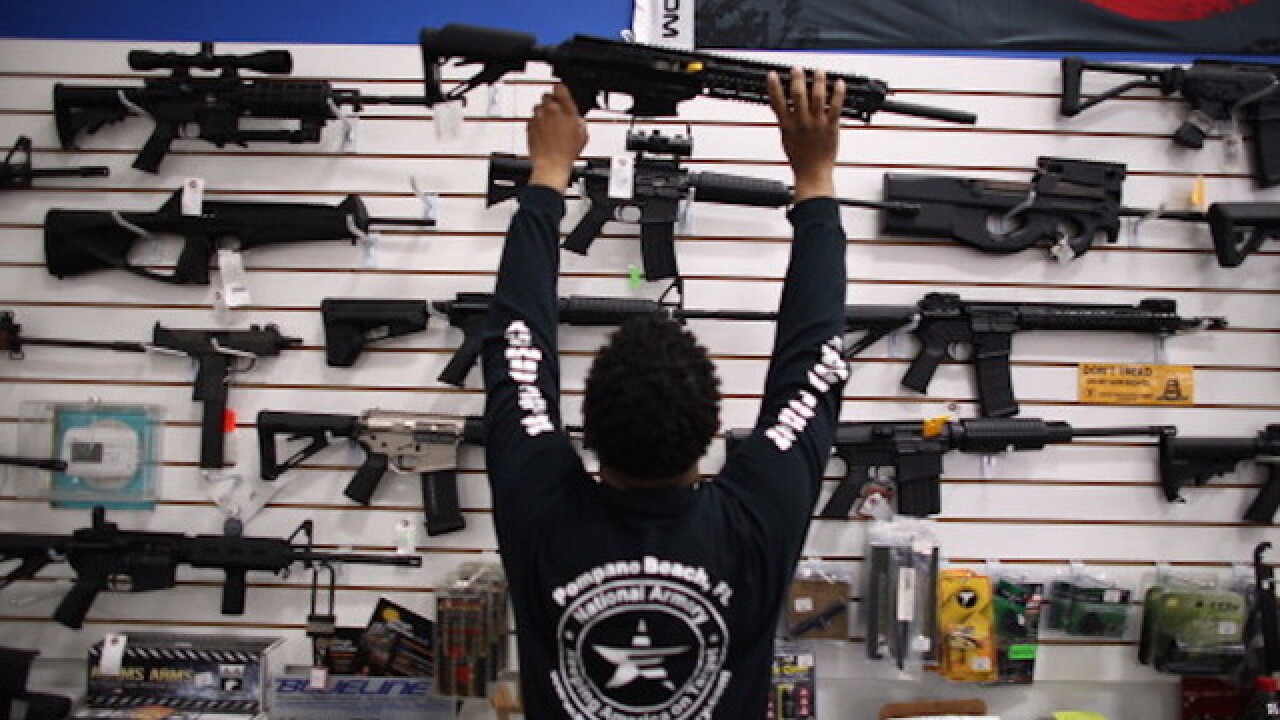 Joe Raedle
<p>POMPANO BEACH, FL - APRIL 11: As the U.S. Senate takes up gun legislation in Washington, DC , Mike Acevedo puts a weapon on display at the National Armory gun store on April 11, 2013 in Pompano Beach, Florida. The Senate voted 68-31 to begin debate on a bill that would significantly expand background checks for gun sales. (Photo by Joe Raedle/Getty Images)</p>

WASHINGTON (AP) — The slaughter in Florida and an attention-grabbing filibuster in the Senate did little to break the election-year stalemate in Congress over guns Thursday, with both sides unwilling to budge and Republicans standing firm against any new legislation opposed by the National Rifle Association.

Democrats renewed their call to action after Sen. Chris Murphy, D-Conn., held the floor along with colleagues in a nearly 15-hour filibuster that lasted into the early hours Thursday.

Longest Filibusters in the US Senate | InsideGov

"We can't just wait, we have to make something happen," said Sen. Cory Booker, D-N.J., at an emotional news conference where Democrats joined family members of people killed in recent mass shootings. "These are people bound by brutality, and their numbers are growing."

But Republicans were coolly dismissive of Democrats' demands. Majority Leader Mitch McConnell, R-Ky., derided Murphy's filibuster as a "campaign talk-a-thon" that did nothing but delay potential votes.

Noting that a few Democrats had skipped a classified briefing on the Florida nightclub shooting to participate in the filibuster, McConnell chided: "It's hard to think of a clearer contrast for serious work for solutions on the one hand, and endless partisan campaigning on the other."

Democrats spoke of the need for new gun legislation. Republicans cited the threat posed by the Islamic State group, to which Orlando gunman Omar Mateen swore allegiance while killing 49 people in a gay nightclub early Sunday. But the two sides mostly talked past each other, and efforts to forge consensus quickly sputtered out. As a result, the Senate faced the prospect of taking dueling votes beginning Monday on Democratic and GOP bills, all of which looked destined to fail.

The back-and-forth came as President Barack Obama visited the victims' families in Orlando, and the White House and Democratic presidential candidate Hillary Clinton joined Senate Democrats' call for action. Presumptive GOP presidential nominee Donald Trump weighed in with a tweet suggesting he would meet with the NRA and support efforts to keep guns out of the hands of terrorists. Exactly what he would support was unclear.

It's the same exercise the Senate has engaged in time and again after mass shootings. Even after the Newtown, Connecticut, shootings of schoolchildren, the Senate could not pass a bipartisan background checks bill. Moderate Republican Sen. Susan Collins of Maine criticized the state of affairs as "Groundhog Day."

After the shooting in San Bernardino, California, last year, the effort was downgraded to trying to pass a bill by Sen. Dianne Feinstein, D-Calif., to keep people on a government terrorism watch list or other suspected terrorists from buying guns, but that too failed.

This time, Feinstein is seeking a revote on her bill. Republicans will offer an alternative by Sen. John Cornyn, R-Texas, that would allow the government to delay a gun sale to a suspected terrorist for 72 hours, but require prosecutors to go to court to show probable cause to block the sale permanently.

Votes were also expected on dueling background check bills. All were expected to fail.

Collins said she was working with other Republicans, as well as talking to Democrats, on a bill that would prevent people on the no-fly list — a smaller universe than targeted by Democrats — from getting guns. But her bill had not been blessed by GOP leaders and it was unclear if it would get a vote.

Polls show large numbers of Americans agree with the need for at least some limited gun measures such as background checks. But Democrats have been unable to turn the tide of public opinion to their purpose because the NRA is able to mobilize and energize voters who will threaten to vote lawmakers out on the gun issue alone.

In the GOP-controlled House, Republicans had no plans to act on guns and Democrats were unable to force any action, given House rules less favorable to the minority party than in the Senate. Instead the House passed a bundle of previously approved counterterrorism bills and sent them to the Senate again.