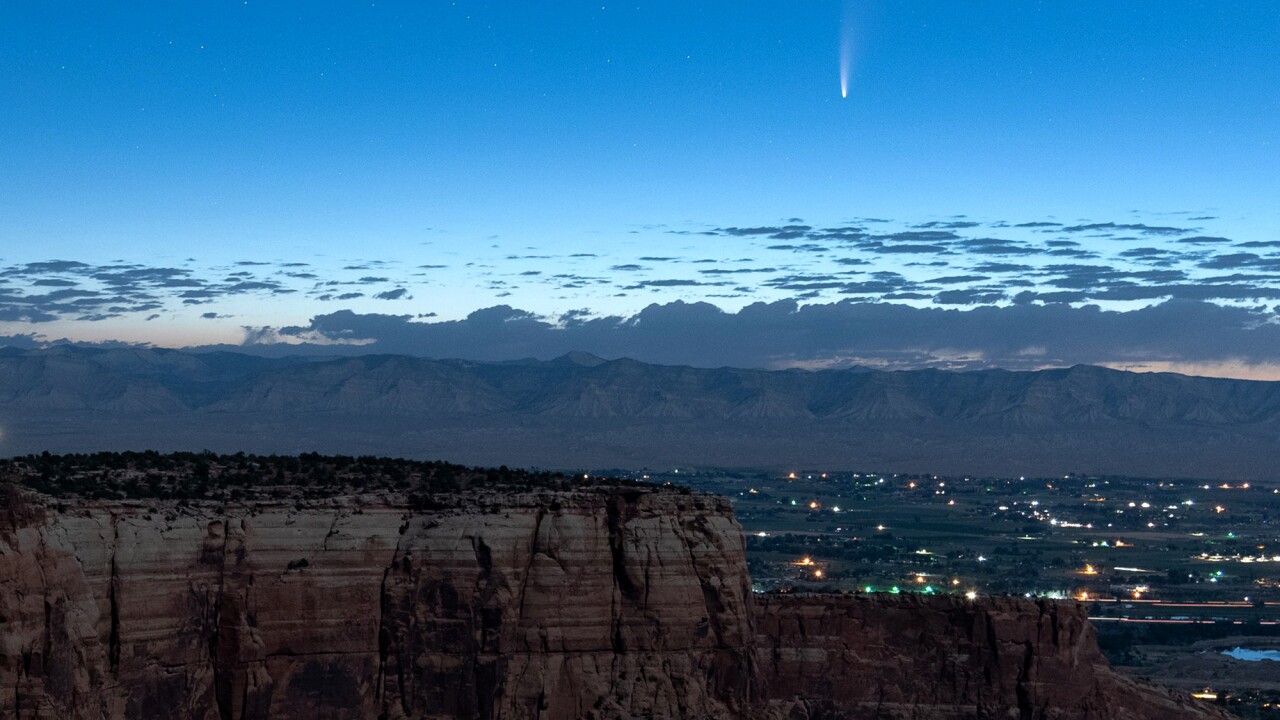 Conrad Earnest
Conrad Earnest/AP
Comet Neowise soars in the horizon of the early morning sky in this view from the near the grand view lookout at the Colorado National Monument west of Grand Junction, Colo., Thursday, July 9, 2020. The newly discovered comet is streaking past Earth, providing a celestial nighttime show after buzzing the sun and expanding its tail. (Conrad Earnest via AP)

CAPE CANAVERAL, Fla. (AP) — A newly discovered comet is streaking past Earth, providing a stunning nighttime show after buzzing the sun and expanding its tail.

Comet Neowise was spotted by the NASA space telescope bearing that name in March.

Since then, the comet — called comet C/2020 F3 NEOWISE— has been spotted by several NASA spacecraft, observatories, and astronauts aboard the International Space Station.

The celestial snowball swept within Mercury's orbit a week ago. Its close proximity to the sun caused dust and gas to burn off its surface and create an even bigger debris tail.

NASA says the comet is about 3 miles across.

"From its infrared signature, we can tell that it is about 5 kilometers [3 miles] across, and by combining the infrared data with visible-light images, we can tell that the comet's nucleus is covered with sooty, dark particles left over from its formation near the birth of our solar system 4.6 billion years ago," said Joseph Masiero, NEOWISE deputy principal investigator at NASA's Jet Propulsion Laboratory in Southern California.

The comet will be visible across the Northern Hemisphere until mid-August, when it heads back toward the outer solar system.

People wishing to catch a glimpse of the glowing comet can spot it as it swings through the inner solar system, but its nearness to the Sun creates some observing challenges.

As it speeds away from the Sun, NASA says the comet will begin to make its appearance in the evening sky shortly after sunset on July 11 or July 12, depending on local conditions.

“Observers might be able to see the comet's central core, or nucleus, with the naked eye in dark skies; using binoculars will give viewers a good look at the fuzzy comet and its long, streaky tail,” said NASA.