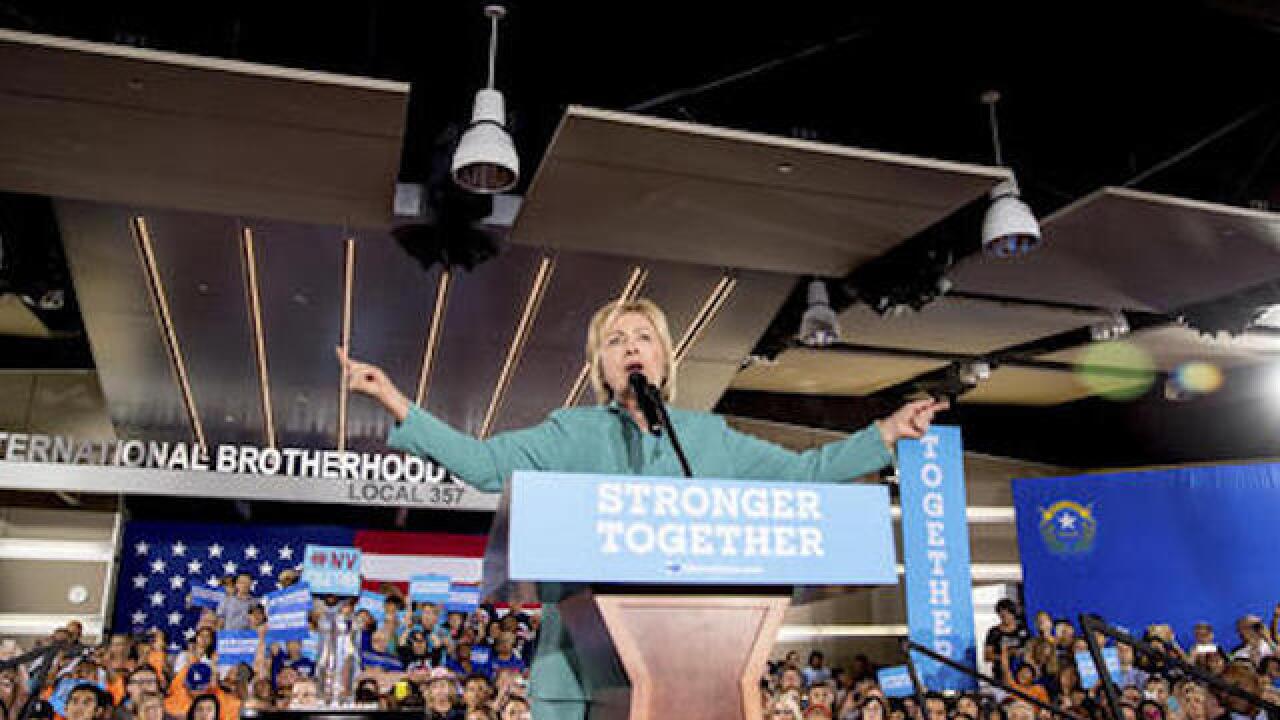 WASHINGTON (AP) — The Latest on the 2016 presidential campaign (all times EDT):

Hillary Clinton says she knows that she has work to do to win over Americans' trust.

The Democrat presidential nominee has some of the highest unfavorable ratings of any presidential candidate in modern history. In many polls, a majority of Americans say they don't trust her.

She said Friday to a meeting of black and Latino journalists in Washington: "I take it seriously. It doesn't make me feel good when people say those things."

Clinton blames some of her low approval rating on Republican attacks, saying she gets higher marks from Americans when she is serving in public office.

She said, "Just maybe when I'm actually running for a job there is a real benefit from those on the other side with trying to stir up as much trouble as possible."

Three Senate Democrats are pressuring Pennsylvania Sen. Pat Toomey and other Republicans to renounce Donald Trump, telling reporters that their wait-and-see stance is insulting to voters.

"This is an example of somebody who doesn't have the courage to stand up" to Trump, said Sen. Debbie Stabenow of Michigan, when asked about Toomey's campaign Friday.

Sen. Jeanne Shaheen, of New Hampshire, mocked Republicans who say they support Trump but don't endorse his candidacy. "That's baloney," Shaheen said. "We have seen what Donald Trump is doing to do," she said. He's not going to "straighten up."

Among those in the support-but-not-endorse category is Republican Sen. Kelly Ayotte of New Hampshire.

Hillary Clinton says passing comprehensive immigration legislation will be a top priority for her administration if elected president, and her White House will be ready to introduce a bill "as quickly" as possible.

Clinton says her victory and Democratic wins in Congress will force Republicans to act on immigration.

She says, "There's nothing like winning to change minds."

Clinton was speaking Friday at a meeting of organizations of black and Latino journalists in Washington.

A bipartisan effort to overhaul the nation's immigration system passed the Senate in 2013, but died in the House in the face of strident Republican opposition.

Clinton says that, "I think the outcome will be very different this time."

Hillary Clinton says President Barack Obama isn't getting the credit he deserves for leading the nation out of a crippling recession.

Speaking at an annual convention of black and Hispanic journalists, Clinton quoted the expression, "When the economy catches a cold, communities of color catch pneumonia."

She said "we are out of the ditch we were in" and should now focus on building upon progress. She said civil rights activist Rosa Parks may have opened up seats on the bus, but the nation's job is to make sure everyone can afford bus fare.