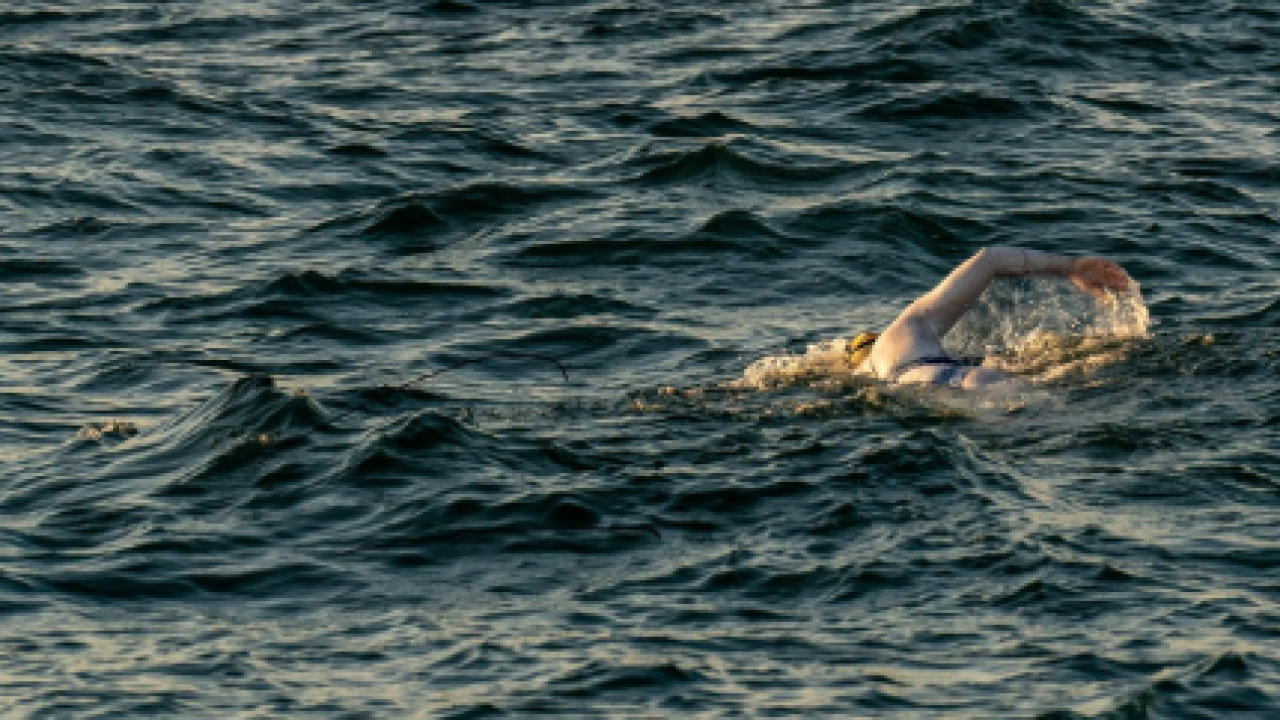 (CNN) -- An American cancer survivor has become the first person to swim across the English Channel four times nonstop.

Sarah Thomas, an open water marathon swimmer from Colorado, completed the record-breaking feat at around 6:30 a.m. Tuesday morning, more than 54 hours after she set off from the British port of Dover.

After landing at Shakespeare Beach on the south coast of the UK, Thomas, 37, said she felt "a little sick," but had been encouraged to continue by her husband and team, according to the UK's Press Association. She was pictured celebrating her achievement with chocolates and champagne on the beach.

"I was really just pretty numb, there were a lot of people to meet me and wish me well, and that was really nice of them, but I feel just mostly stunned right now; I just can't believe that we did it," she said in a video clip from a forthcoming documentary posted on the BBC website.

Thomas said that the hardest part of the challenge was dealing with the salt water, adding that she was "losing her voice."

Despite the length of the swim, Thomas said that she "knew what to expect from the currents and the weather and the cold," and was "very prepared for the amount of time" she was going to be in the water.

Thomas' achievement comes just one year after she completed treatment for breast cancer. Writing on Facebook before the challenge, she admitted to being "scared" and said that the Channel can do "a lot of crazy things."

"I've been waiting for this swim for over two years now and have fought so hard to get here," she wrote. "Am I 100%? No. But I'm the best that I can be right now, with what I've been through, with more fire and fight than ever."

"The hype leading up to this swim has been a little unnerving. I hope I don't let you all down after all this! Just turn the volume up loud for me on that last lap, I'll need all the help I can get."

She dedicated her swim to "all the survivors out there" and for all those starting their "cancer journey."

"This is for those of us who have prayed for our lives, who have wondered with despair about what comes next, and have battled through pain and fear to overcome," she wrote.

"This is for our family and friends who held us in their arms and provided the strength and support we needed in the hardest times."

Thomas' achievement has drawn praise from leading figures in the swimming world and beyond. Lewis Pugh, an endurance swimmer who is best known for undertaking the first swim across the North Pole, described her as "extraordinary, amazing, super-human."

"Just when we think we've reached the limit of human endurance, someone shatters the records," he wrote on Twitter. "Huge congratulations to Sarah Thomas on swimming the English Channel 4x continuously."

He added: "Sarah Thomas has overcome 5 major hurdles to become the first person to swim the English Channel four times non-stop: 1. The cold. 2. Jellyfish. 3. Sheer exhaustion. 4. Keeping her mind going. 5. Believing that it was possible."

Matthew Pinsent, a retired British rower who won four consecutive Olympic gold medals, added: "Fantastic endurance. Begs the question -- what have you/I been doing the last 50 hours? Not swimming the Channel four time back to back to back to back! Brava Sarah Thomas."

During the swim, Thomas relied on a diet of protein recovery drinks filled with electrolytes and caffeine, she told the BBC. She also admitted to being stung in the face by a jellyfish during her crossings.

Thomas' planned route was around 80 miles in length, but she ended up swimming more than 130 miles after being pulled off course by strong currents.

Tuesday's feat is not the first time Thomas has completed a Channel crossing; she first swam across the world's busiest shipping route in 2012, completing the challenge in 11 hours 22 minutes.

Thomas' historic achievement is set to be featured in the upcoming documentary "The Other Side" made by filmmaker Jon Washer.

Washer told CNN that he met Thomas through marathon swimmer Elaine Howley. "Elaine, one of Sarah's crew members, is a good friend of mine and introduced me to Sarah," he said.

"We just knew her story needed to be told and began producing The Other Side via a successful crowd-funding campaign. And here we are."

He said that filming the crossing for the last 60 hours "was a nightmare."

"But Sarah is so tough and inspirational, there was just no room for failure on my part. And we're not anywhere close to finished," he said.