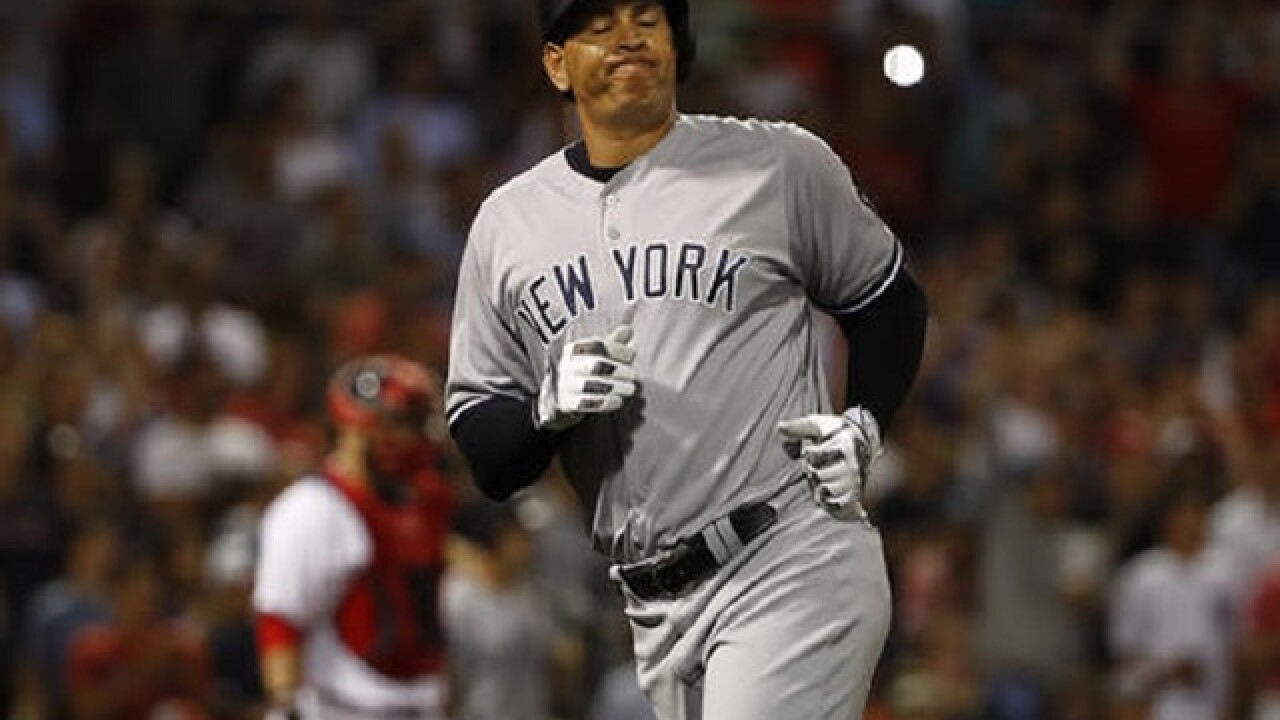 Winslow Townson
<p>New York Yankees' Alex Rodriguez reacts to flying out as a pinch hitter during the seventh inning of a baseball game against the Boston Red Sox at Fenway Park in Boston Wednesday, Aug. 10, 2016. (AP Photo/Winslow Townson)</p>

BOSTON (AP) — Yankees manager Joe Girardi finally found a spot he liked for Alex Rodriguez.
Two more games and he won't have to worry about it.
Benched from the starting lineup once again as his finale approaches, Rodriguez pinch hit and flied out in the seventh inning of New York's 9-4 comeback win against the Boston Red Sox on Wednesday night.
"I was looking for a three-run homer so I went to him," Girardi said of A-Rod. "Just missed it."
Red Sox star David Ortiz limped off in the ninth inning after fouling a pitch off his right shin. Boston said X-rays were negative.
"My heart sank a little bit when I saw it, but I just saw him and I feel much better," Red Sox president of baseball operations Dave Dombrowski said.
New York received another health scare when pitcher Nathan Eovaldi left after one inning because of right elbow discomfort.
Chants of 'We Want A-Rod!' echoed around the park at the start of the seventh. He was greeted by loud boos when he stepped out of the dugout to face Matt Barnes. They were louder when he was announced and again when he trotted back to the dugout after his flyout to right field, which dropped his batting average to .203 and extended his slump to 4 for 37 (.108).
Rodriguez has just one start and eight at-bats in 17 games since July 22 as New York traded veterans and turned toward a youth movement. He had not appeared in a game since Aug. 2.
"My job description does not entail a farewell tour," Girardi said during a pregame media session that at times was a bit testy. "My job description is to try to win every game and to try to put everyone in the best possible position to do that, and that's what I'm trying to do."
Rookie Gary Sanchez had four hits, including his first major league home run. Didi Gregorius also homered for New York, which overcame a 4-1 deficit, and Fernando Abad (1-6) gave up Starlin Castro's two-run double that capped a five-run seventh.
Tyler Clippard (1-0) pitched one inning for his first victory with the Yankees since being acquired from Arizona last week. New York used seven relievers after the departure of Eovaldi, whose fastball velocity was 93-94 mph, down from 97 mph in his previous start.
Eovaldi is being sent back to New York for further examination. Pitching coach Larry Rothschild noticed the velocity dip.
"Larry asked him again: What hurts?" Girardi said. "He said I'm OK. He finally said he felt something in his elbow."
Mookie Betts had two doubles for Boston before leaving with right calf tightness.
At the beginning of his pregame media session, Girardi said Rodriguez will be in the starting lineup Thursday despite Boston scratching knuckleballer Steven Wright.
New York said Sunday that Rodriguez, a 41-year-old designated hitter with 696 home runs, will be released following Friday's homestand opener against Tampa Bay.
Girardi said he "made a mistake" by saying on Sunday that if Rodriguez wanted to play in all remaining games before his release that he would try to get him in the games.
"I talked to him again on Tuesday about it and said: This is what my plans were,'" Girardi explained. "I knew he didn't like it. But, again, I have a responsibility to the game of baseball. No one individual is ever bigger than this game. No one. No one. No one.
"And I'm not going to forget about it - as much as we've been through together. It's hard. Believe me, it's really hard."
Left-hander Eduardo Rodriguez (2-5) will start for Boston on Thursday because Wright jammed his right shoulder while diving into a base as pinch runner against the Los Angeles Dodgers last weekend.
"It's about winning the games," Girardi said when asked if he liked the matchup. "That's what it's always about here. It'll continue to be that way."
Girardi then answered about 12 minutes of questions why A-Rod wasn't starting the first two games of the series.
"You could say what you want, there's a lot of relationships involved here and it bothers me sometimes because people say one thing to do and because it becomes controversial they say another and it's difficult," Girardi said. "When we look at this decision, we're basing it on a substantial amount of at-bats - and it's not what we want. I think our hope is he'd hit 30 home runs again, but that hasn't been the case this year."
Girardi said he understands some may consider him a 'bad guy' for not playing A-Rod.
"It is what it is," he said. "It's part of the job, I guess."
Girardi explained further that Boston was in the AL East race and Tampa Bay was out of it, justifying his decision to start Rodriguez on Friday.
"My job is to put out what I feel is the best lineup, and that's what I'm trying to do," Girardi said. "It's been difficult."
TRAINER'S ROOM
Red Sox: OF Chris Young (strained right hamstring) is scheduled to start a rehab assignment with Triple-A Pawtucket. Farrell said he'd "probably have a minimum of 20, 25 at-bats."... OF/C Blake Swihart will have season-ending surgery on his left ankle Monday. Farrell said Swihart will have a three-to-four month recovery.
Copyright 2016 The Associated Press. All rights reserved. This material may not be published, broadcast, rewritten or redistributed.