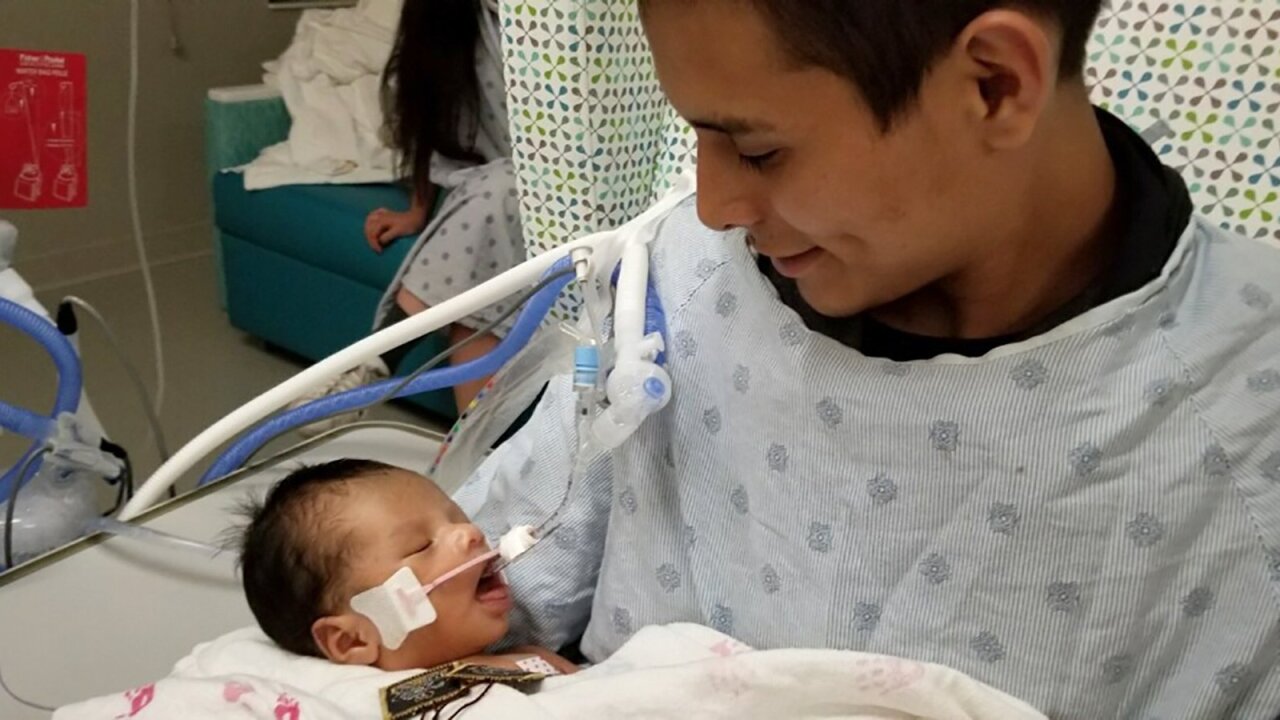 A baby cut from his mother's womb during a brutal attack in April has died, a family spokeswoman said.

Yovanny Jadiel Lopez had been in intensive care since his mother, Marlen Ochoa-Lopez, was killed in Chicago.

The infant died Friday due to a severe brain injury, Julie Contreras said.

The baby's condition earlier this week had been dire, his father's lawyer told CNN affiliate WLS .

"He can't breathe on his own. He can't eat on his own. There's tubes down his throat," attorney Frank Avila said Wednesday.

"He suffered irrevocable brain damage," Contreras added, according to the station. "There's no medicine, there's no pill that can fix that. Only a miracle."

Yovanny's mother, Ochoa-Lopez, 19, was lured to a woman's home by an offer of free baby clothes, police say. She was then strangled and her unborn baby cut from her. Her body was found weeks later in a garbage can.

Three people have been arrested and charged in the killing.

In a photo the family released last month, Yovanny is held by his father, Yovani Lopez. The picture, taken by a student pastor, shows the baby attached to various tubes and apparently asleep in his father's arms.

Around the time the photo was taken, the baby opened his eyes .

A mother and daughter are charged in Ochoa-Lopez's killing.

All three are set to be arraigned June 26, court documents show. Bobak's lawyer hasn't seen a copy of the indictment but maintains his client's innocence, the attorney told CNN.

Clarisa Figueroa then got on top of the teen and strangled her for about four to five minutes, the prosecutor said.

When she was dead, the elder Figueroa cut the teen's baby from her womb. She then called 911 and said she'd just delivered a baby that wasn't breathing, Murphy said.

Clarisa Figueroa and the infant then were hospitalized, though the woman showed no signs to suggest she'd just delivered a baby, Murphy said.

The suspects allegedly planned the attack for months.

Figueroa's 20-year-old son, Xander, had died in 2018, according to prosecutors. In October, she announced she was pregnant, which surprised her family because her fallopian tubes were tied.

By December, Figueroa had posted a Facebook picture of an ultrasound showing what she claimed was the baby she was carrying, Murphy said. Two months later, she posted a picture of a crib and baby's room to a Facebook page that provides baby items for families in need, he said.

She posted on the page again the following month, asking, "Who is due in May" and "Where is the May mama's at."

Figueroa connected there with Ochoa-Lopez, who at that time was seven months pregnant, Murphy said. The teen had posted that she was looking for baby items, including a stroller. Figueroa offered her clothes for the baby and suggested they talk in a private message.

Then on April 1, Figueroa told her daughter that "she needed help killing a pregnant woman and taking a baby," Murphy said.

Ochoa-Lopez, a high school student, went to Figueroa's home at least twice this year after connecting through the Facebook group and accepting Figueroa's offer of baby items, Chicago police said.

Ochoa-Lopez's husband reported her missing on April 24, police said. Her body was found in a garbage can at the Figueroas' home on May 14.

A break in the case came May 7, when a friend of the victim told detectives about Ochoa-Lopez's exchanges with Figueroa before she vanished, police said.

Detectives visited the Figueroa home that day, and Desiree Figueroa told them her mother was in the hospital for problems with her legs. Then she revealed that her mother had just delivered a baby, authorities said.

That same day, detectives interviewed the elder Figueroa at a hospital. She denied the victim came to her house April 23 but admitted to meeting her in the past, police said.

Suspicious, detectives spent the next several days subpoenaing hospital records and collecting DNA samples from the baby and Clarisa Figueroa.

DNA tests determined Figueroa was not the mother of the baby and Ochoa-Lopez's husband, Yovani Lopez, was the father, Deenihan said.

Detectives discovered bleach and cleaning solutions in the home, along with evidence of burned clothing and blood on the floors of the living room, bathroom and a hallway, Deenihan said.

Ochoa-Lopez's body was found in a garbage can in the backyard, along with the cable used to strangle her and other evidence, police said.

A medical examiner determined that she died of strangulation, and Desiree Figueroa told detectives she helped her mother kill her, police said.

The motive for the killing is under investigation, but Chicago police Superintendent Eddie Johnson said he believes the elder Figueroa wanted to raise the child as her own.