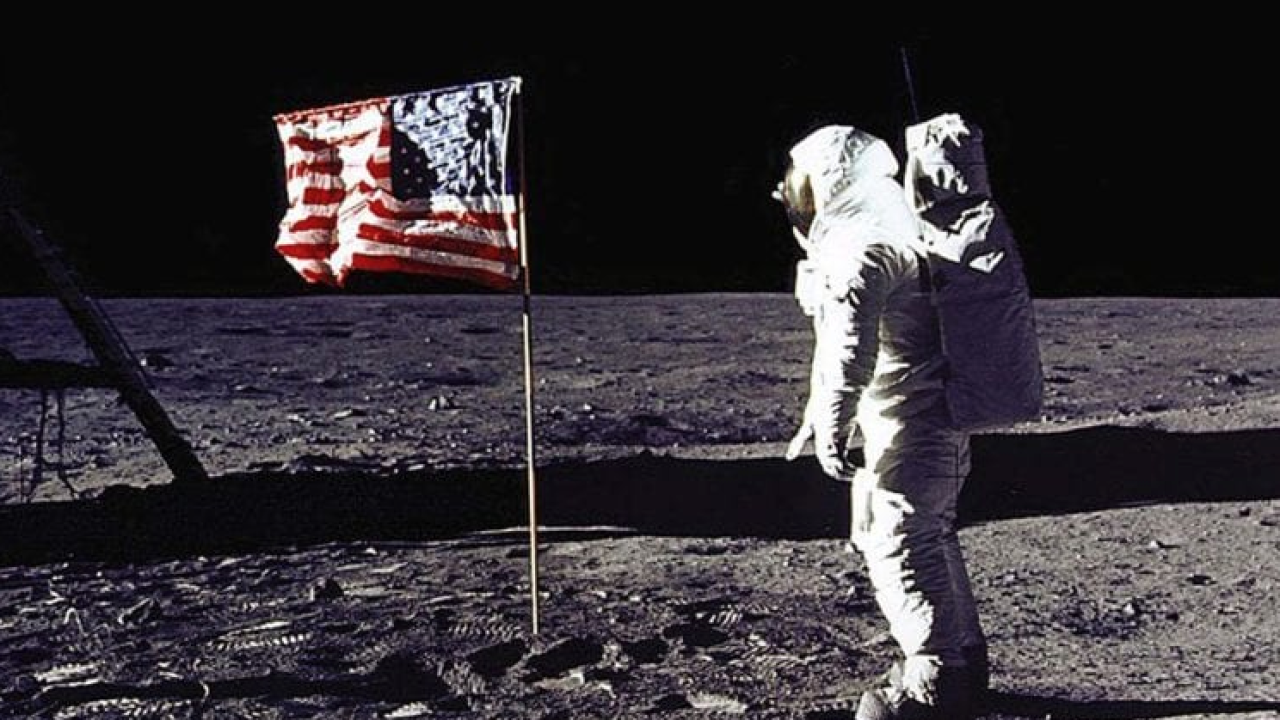 That massive workforce stretched across the U.S. and included engineers, scientists, mechanics, technicians, pilots, divers, seamstresses, secretaries and more who worked tirelessly behind the scenes to achieve those first lunar footsteps .

Some of them will be taking part in festivities this week to mark the 50th anniversary .

A brief look at four:

Amid the sea of white shirts, black ties and pocket protectors inside NASA's firing room for the liftoff of Apollo 11 sat JoAnn Morgan.

July 16, 1969 was her prime-time debut as the first female launch controller. It wasn't easy getting there.

Morgan, 78, who began working for NASA in 1958 while in college, typically got the overnight shift before launches. She'd be replaced by a male colleague a few hours before showtime.

"The rub came on being there at liftoff," she recalled.

And there was the taunting. She'd get obscene phone calls at her desk at Kennedy Space Center and lewd remarks in the elevator.

The situation was even more strained next door at Cape Canaveral Air Force Station. The old launch-pad blockhouses there had a single restroom — for men. So Morgan found herself dashing to a nearby building for a women's restroom, just as portrayed in "Hidden Figures," the 2016 hit movie.

"I was there. I wasn't going anywhere. I had a real passion for it," Morgan said. "Finally, 99 percent of them accepted that 'JoAnn's here and we're stuck with her.' "

As Apollo 11 loomed, Morgan's boss went to the top to get her on liftoff duty. By then, the harassment had pretty much stopped.

While NASA's countdown clocks ticked toward a 9:32 a.m. launch, Morgan monitored ground instrumentation, everything from fire and lightning detectors to guidance computer data. When the official firing room photo was later taken — showing Morgan with her left hand raised to her chin — she was listening to Vice President Spiro Agnew address the team after the launch.

With Armstrong, Aldrin and Michael Collins on their way, her job was done, at least for Apollo 11. Morgan and her husband Larry, a high school band director, slipped away on vacation and watched the July 20 moon landing on a hotel TV. As they toasted the first lunar footsteps, he told her, "Honey, you're going to be in the history books."

Morgan went on to become Kennedy's first female senior executive. Retired since 2003, she splits her time between Florida and Montana, and encourages young women to study engineering.

Tedd Olkowski was on emergency standby for the launch countdown of Apollo 11.

His job was to help Collins — should the unlikely need arise before liftoff — escape from the Saturn V rocket, descend 32 stories in a high-speed elevator and then slide down a 200-foot (61-meter) tube into a bunker deep beneath the pad.

Armstrong and Aldrin had their own guardian angels, according to Olkowski, space center workers who, like himself, had volunteered for the potentially dangerous assignment.

NASA figured the astronauts, impeded by their cumbersome white spacesuits, could use extra help getting from a burning, leaking or even exploding rocket, all the way down to the so-called rubber room.

The rubber-padded, shock-absorbing room led to a domed, blast-proof chamber 40 feet (12 meters) under Kennedy Space Center's Launch Complex 39A. The dungeon had strap-in chairs, two-way radio and enough food to ride out a cataclysmic event. There was a similar setup under Pad 39B. Neither bunker was ever needed and later abandoned.

Olkowski's regular job was working with the pad's closed-circuit TV system. He was a skinny 24-year-old from Cocoa Beach, but stood 6-foot-3 (1.9 meters) and jumped at the chance to be on an emergency team since he was already out there keeping tabs on the cameras.

With an hour remaining in the countdown, the pad was evacuated by everyone except the Apollo 11 crew. Olkowski joined other workers a safe three miles (5 kilometers) away and watched the world's biggest rocket thunder away on humanity's first moon landing.

"Even though we weren't considered major players in it, we were just there to help the astronauts if they needed help, yeah, I mean it was exciting, especially now when I look back," he said.

Soon afterward, Olkowski quit his job to go to college, then spent a career with General Telephone and Electronics Corp. Now 74 and retired, he lives in League City, Texas, next door to NASA's Johnson Space Center.

Olkowski got a chance to meet up with Collins a decade or so ago.

As Mission Control's flight activities officer in Houston, Gardner occupied the console to the right of Kranz, just across the aisle. Barely 26, Gardner was one of the youngest flight controllers on duty when the Eagle lunar lander settled onto the Sea of Tranquility with Armstrong and Aldrin on July 20, 1969.

His job was to stay on top of the astronauts' timeline. What if, for instance, the moon landing had to be aborted? Everything downstream would need to change. So Gardner constantly was thinking ahead, considering how best to rejuggle the flight plan if necessary.

Looking back, Gardner wishes he'd savored the moment of touchdown more. But he had a job to do and there was no time for reflection.

After the Eagle landed and his shift ended, Gardner went to a friend's home, where everyone gathered around a black-and-white TV that night to watch Armstrong's "small step" and mankind's giant leap.

Gardner wasn't on duty for the July 24 splashdown. But he went to Mission Control anyway, joining the flag-waving, cigar-smoking crowd as Apollo 11's astounding voyage came to an end in the Pacific.

"This is, to use the 'Hamilton' expression, the room where it happened," he said inside the newly restored Apollo-era Mission Control last month. "Other than the lunar module and the command module, you couldn't get any closer to it than this. We were in the room when it happened, and the sense of completion, I guess, struck me later. We had done what President Kennedy had asked us to do."

Navy frogman Clancy Hatleberg was the first to welcome Apollo 11's moonmen back to Earth.

His mission on July 24, 1969, was to decontaminate Armstrong, Aldrin and Collins and their command module, Columbia, immediately after splashdown in the Pacific.

The astronauts needed to be quarantined. Otherwise, who knows what moon germs might escape.

It may seem silly now, but the possibility of lunar bugs was "a really serious concern" back then, according to Hatleberg, who was 25 at the time and fresh from an underwater demolition team rotation in Vietnam.

Hatleberg was one of four frogmen on the recovery team who jumped into the ocean from a helicopter. The others secured the capsule, then moved upwind in a raft. That's when Hatleberg moved in, carrying disinfectant.

Covered in a protective garment, Hatleberg momentarily opened Columbia's hatch to toss in a bag with three of the outfits. Once the astronauts had the gray garments on, they emerged from the capsule one by one onto a waiting raft.

The first spaceman out offered his hand to shake. Hatleberg paused — shaking hands was not part of the NASA protocol that he'd practiced. He recalled thinking, "I was the last person who could screw the whole thing up."

Once the astronauts were wiped down by Hatleberg with a potent bleach solution, they were lifted into a helicopter and flown to the USS Hornet, where their quarantine mobile home awaited them along with President Richard Nixon.

Hatleberg scoured Columbia before it, too, was transported to the aircraft carrier. He cleaned the raft and the flotation collar that had been around the spacecraft, then punctured them and watched them sink with his own decontaminated garment, any moon bugs swallowed by the sea.

"There were so many other people whose jobs were more important than mine," Hatleberg said. Looking back, he's still in awe at what the Apollo astronauts accomplished. "They were the ones who risked their lives to take that giant leap for all mankind. They're the heroes and they always will be — in my heart."

Hatleberg — who at 75 is working again as an engineer in Laurel, Maryland — said he always thought Aldrin was the first one he helped from the capsule. That is until a year or so ago, he said, when a Hornet curator pulled out old footage and zoomed in on the name tag.

Follow AP's full coverage of the Apollo 11 anniversary at: https://apnews.com/Apollo11moonlanding

The Associated Press Health and Science Department receives support from the Howard Hughes Medical Institute's Department of Science Education. The AP is solely responsible for all content