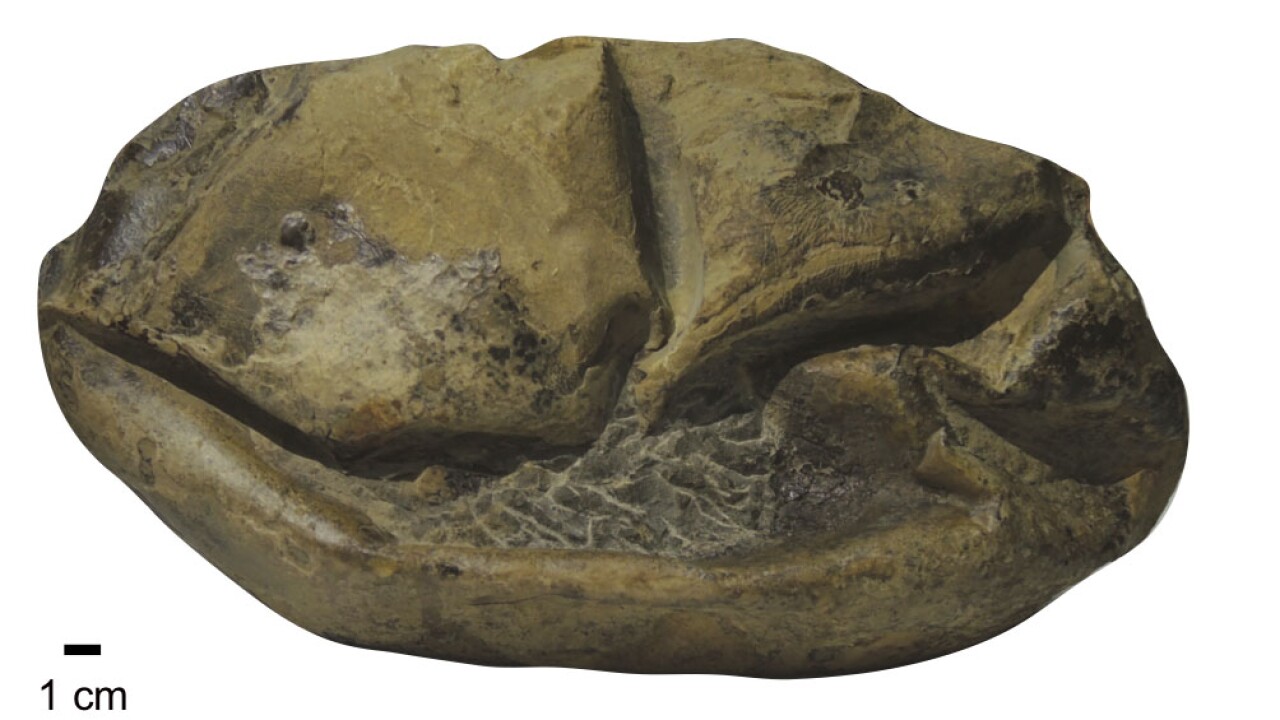 Credit: Legendre et al. (2020)
A side view of thefossil of thegiant egg.

The fossil of a large egg dating from the time of the dinosaurs has been found for the first time on the continent of Antarctica. In addition to its large size and unique location, this discovery is also challenging how scientists think about marine births millions of years ago.

The details of the egg and its discovery were published this week in the journal Nature.

The egg, measuring 11 inches long and 7 inches wide, was found back in 2011 by Chilean scientists, and sat in Chile’s National Museum of Natural History, labeled only as “The Thing.” David Rubilar-Rogers was one of the scientists who discovered the fossil and works at the museum. He reportedly showed it to every geologist who visited the museum, hoping someone could identify it. Julia Clark from the University of Texas at Austin visited in 2018.

“I showed it to her and, after a few minutes, Julia told me it could be a deflated egg!” Rubilar-Rogers said.

“The Thing”, identified as an egg, dates from around 66 million years ago, in the late Creataceous period. Meaning, it was on earth during the same time as the Tyrannosaurus Rex, Stegosaurus and Stygimoloch. Its scientific name, Antarcticoolithus bradyi, comes from the continent where it was found, and a reference to ancient greek words for “egg” and “stone”.

Its appearance is described as “deflated,” looking like a crumpled ball of paper. Scientists say this is because it had a soft shell, similar to lizards, snakes and sea turtles. Most dinosaurs are believed to have laid hard-shelled eggs, and some scientists believe swimming reptiles had live births in the water. This discovery has some considering marine reptiles may have been born from soft eggs as soon as they were released in the water.

“It is from an animal the size of a large dinosaur, but it is completely unlike a dinosaur egg,” said lead author Lucas Legendre, a postdoctoral researcher at UT Austin’s Jackson School of Geosciences. “It is most similar to the eggs of lizards and snakes, but it is from a truly giant relative of these animals.”

Although the species inside the egg is unknown at this time, scientists believe it belongs to a mosasaur, a swimming reptile, whose skeletal remains were found near the site of the egg. Measurements indicate the egg belonged to an individual roughly 7 meters long.

This egg is the second-largest egg ever discovered, only slightly smaller than the elephant bird egg. The elephant bird went extinct in roughly 1200 CE, and the largest found egg was 12 inches long and 8 inches wide.

"This discovery represents a major foundational shift, helping us understand constraints on vertebrate egg size and providing an unexpected glimpse of marine reptile reproduction. Any egg of this size is noteworthy, but to preserve a soft-shelled egg of this size is momentous. It certainly expands the bounds of our understanding and lays the groundwork for future discoveries. Maybe there are more soft-shelled eggs waiting to be discovered that have been overlooked because of their bizarre shapes or preservation," said Curator of Dinosaurs, Dr. Joe Sertich, from the Denver Museum of Nature and Science, who was not involved with this recent discovery, however has been involved in several prehistoric and dinosaur discoveries and ongoing research.

“The Thing” is back at Chile’s National Museum of Natural History in Santiago.