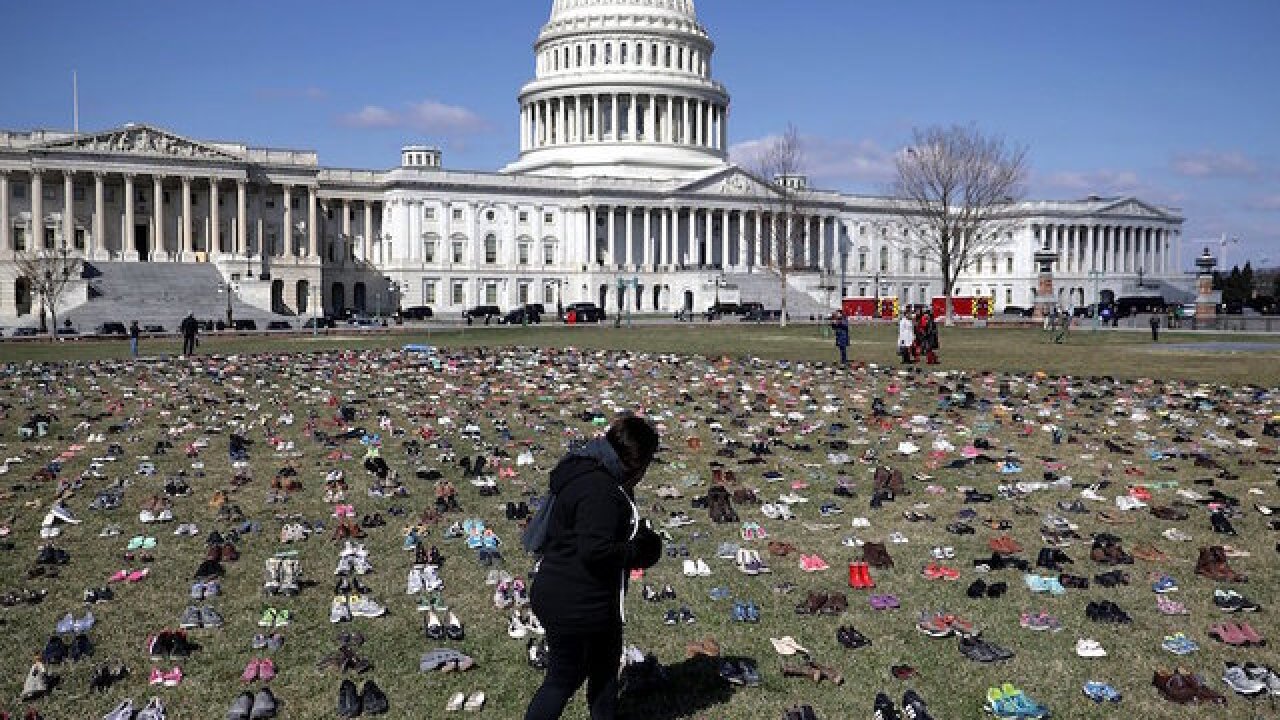 © 2018 Cable News Network, Inc.
Chip Somodevilla/Getty Images
<p>Seven thousand pairs of shoes, representing the children killed by gun violence since the mass shooting at Sandy Hook Elementary School in 2012, are spread out on the lawn on the east side of the US Capitol on Tuesday in Washington.</p>

In the shadow of the Capitol dome Tuesday was a sobering display of thousands of pairs of shoes, organized neatly across the grass said to represent children who have died in the US from gunshot wounds since the Newtown elementary school massacre in 2012.

The global advocacy group Avaaz has been collecting donated pairs of shoes for two weeks and early Tuesday morning lined them up one by one, 18 inches apart, in roughly 80 rows on the Capitol lawn, as Congress continues to sort through a debate over gun violence and school safety.

"Shoes are individual. They're so personal. There are ballet slippers here and roller skates. These are kids," said Nell Greenberg, the campaign director for Avaaz.

The display feature 7,000 pairs of shoes. To arrive at that figure, the group cited a  2017 report  from the American Academy of Pediatrics using data from the Centers for Disease Control and Prevention that found nearly 1,300 children die from gunshot wounds in the US every year. Avaaz then tallied up the estimated number since the December 2012 shooting at Sandy Hook Elementary School.

Organizers say shoes were donated from across the country and stored in a Washington, DC, warehouse until Tuesday. Among those who donated were family members who've lost loved ones to gun violence, such as Tom Mauser, who lost his son in the Columbine school shooting and traveled from Colorado to hand deliver his son's shoes for the display.

"My son wore the same size shoes as me. I discovered that after he died and that became a big symbol for me, that I could walk in his shoes," said Mauser, who has since become an advocate for stricter gun control.

Mauser came to Washington with two pairs of his son's size 10.5 shoes. He placed one pair in the display and wore the other pair -- some gray and black Vans that Daniel was wearing the day he was killed. "That's usually what I wear," Tom Mauser said.

Shoes from celebrities like actress Bette Midler and comedian Chelsea Handler were also seen on the grass.

The House of Representatives votes Wednesday on a bill to increase security at school, and while it's expected to pass, many Democrats are upset the package doesn't include gun control measures. Also on the Capitol lawn Tuesday, six senators gathered for a news conference to support the Senate version of the House bill, also known as the STOP School Violence Act. The Senate version does not contain gun measures.

The Senate Judiciary Committee will hold a hearing Wednesday on the Parkland shooting and failures by FBI and law enforcement to recognize warning signs exhibited by the gunman before the massacre. The hearing is also expected to focus on a spate of recent gun control legislation that's been introduced by members on both sides of the aisle.

Gabrielle Weiss, a 24-year-old volunteer who helped lay out the shoes Tuesday morning, said she wanted to help keep the issue of gun violence alive in the news cycle after seeing it fade after past shootings.

"I was happy that we were doing this a while after (the Florida shooting) just to keep beating the drum," said Weiss. "These kids that were lost in Florida, they aren't just headlines. They're real people that could have been standing there today."