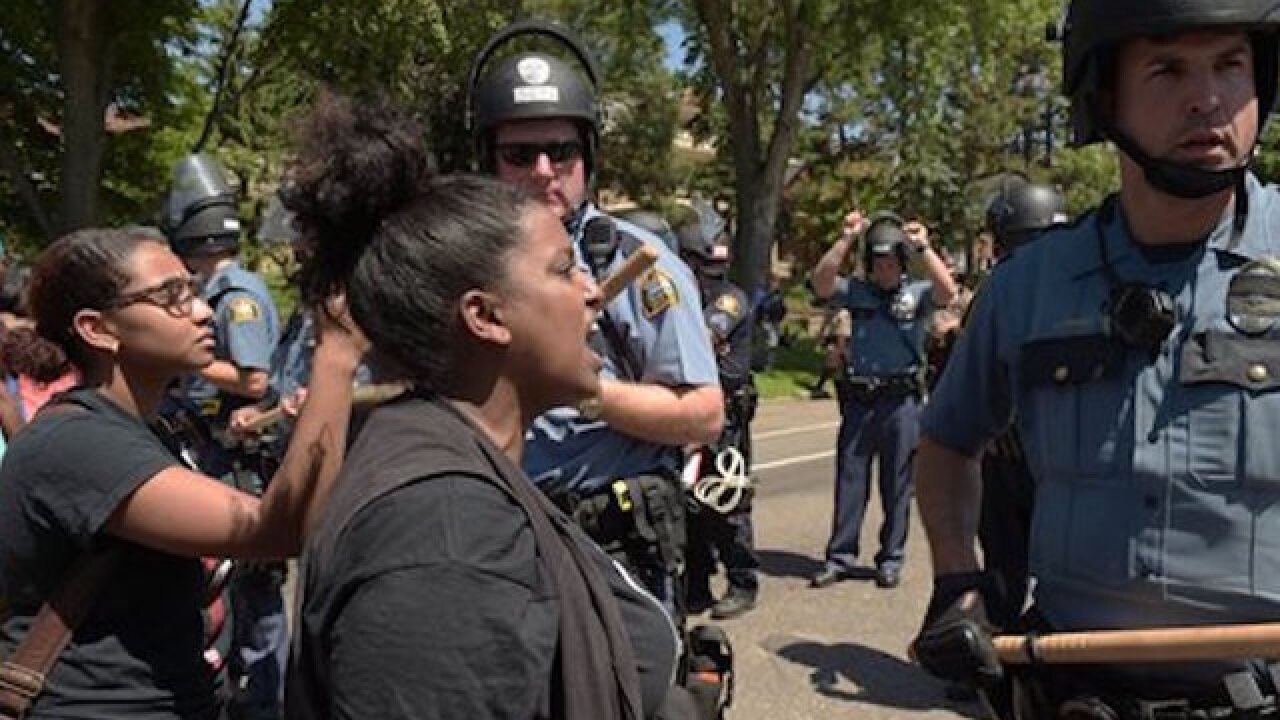 Copyright Associated Press
Scott Takushi
<p>Wintana Melekin speaks to a line of St. Paul police as police and protesters face off on Summit Avenue, a block from the Governor's residence, in St. Paul, Minn. on Tuesday, July 26, 2016. Police have arrested an unknown number of protesters in front of the governor's mansion on St. Paul's Summit Avenue. Demonstrators have been camping outside the governor's residence since early July 7, a day after the shooting of Philando Castile, who was killed by a St. Anthony police officer during a traffic stop. (Scott Takushi/Pioneer Press via AP)</p>

ST. PAUL, Minn. (AP) — Nearly 70 people have been arrested as police cleared demonstrators from the street in front of the Minnesota governor's mansion, police in St. Paul said Wednesday.

Demonstrators have been camping outside the governor's residence since July 7, a day after Philando Castile, a black man, was shot and killed by a suburban police officer during a traffic stop. Castile's girlfriend livestreamed the aftermath of his shooting on Facebook.

St. Paul police said the most recent arrests were made at 2:30 a.m. Wednesday, when 23 people were taken into custody for public nuisance and unlawful assembly. They were taken from the scene by bus. Forty-six people were arrested Tuesday.

The scene was quiet Wednesday morning.

Police had cleared the street before — on July 18 — but protesters went back into the road Sunday. Police told the protesters Tuesday morning that they could no longer block the street and demonstrators began to gather their belongings, police spokesman Steve Linders said.

Police began making arrests around 11 a.m. Tuesday, after one protester allegedly removed a "No Parking" sign from a curb, the Star Tribune reported.

Minneapolis NAACP President Nekima Levy-Pounds accused police of a "show of military force against unarmed peaceful protesters," Minnesota Public Radio News reported. She said she would not tell people to stop the protest.

"I'm not telling the people to move. They deserve to be out here," Levy-Pounds said. "We don't need to be treated like animals and criminals when we're simply out here demanding justice for someone who didn't deserve to be killed."

Gov. Mark Dayton, who is in Philadelphia for the Democratic National Convention, has said protesters are welcome to stay outside his residence as long as they want. Dayton has suggested that race played a role in Castile's death.

Dayton was not involved in the decision to clear the street, spokesman Sam Fettig said Tuesday.

St. Paul Mayor Chris Coleman said peaceful protests would be allowed "but we have an obligation that people are safe and follow the rules, and when that's no longer the case we need to take action."

The Minnesota Bureau of Criminal Apprehension is investigating Castile's death.