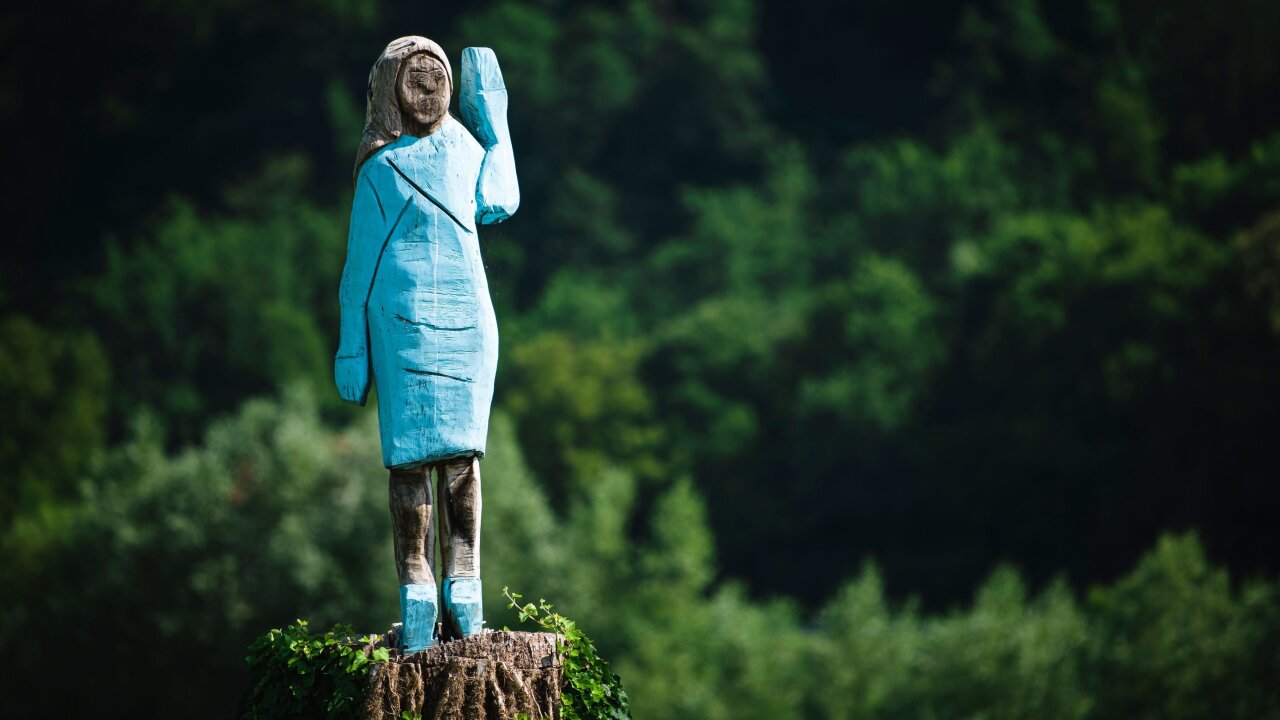 Melania Trump has made a surprise reappearance near her Slovenian hometown of Sevnica, emerging from a tree stump in the form of a rustic wood statue.

While the sleepy town of 5,000 has profited from its most famous daughter -- placing itself firmly on the tourist trail, selling a range of Melania-themed products including honey, chocolate and cake -- the US first lady's latest reincarnation has divided opinion.

US artist Brad Downey commissioned the life-size statue from local chainsaw sculptor Ales Zupevc, better known as Maxi, who was born in the same year and same hospital as the first lady, but whose life took a very different path.

The creation of the sculpture forms part of a documentary filmed by Downey, which was presented as part of his latest exhibition, "Slow Motion Disasters," at the Kunstraum Kreuzberg/Bethanien gallery in Berlin. The documentary will also be shown at his exhibition in the Slovenian capital Ljubljana.

For the film, Downey spent several months filming interviews with Maxi around the town, creating an intimate impression of the first lady's roots in the alpine country, and the life of an individual still living there, he told CNN.

"I don't know her personally, but she's my age," Maxi says in the film. "We were both born in April. All the more reason to make the statue. Being born the same year, the same month. She might come and see the thing. She might like it."

Maxi acknowledges the sharp divergence of his and Melania's lives, despite the fact they came from the same humble roots. "Let's face it, she owns half of America while I have nothing," he says.

Nadia Pilchowski, a curator at the gallery, notes that the film offers a "personal portrait of Maxi and his thoughts about Slovenia, the USA, Europe, immigration and class division."

"Through these interviews the film attempts to capture the spirit of Slovenia, which seems to be mirrored in Maxi's interactions with his family, environment and his feelings about art, God, love and country," she writes in a foreword to the exhibition.

"By focusing on one working class man's portrayal of a public and internationally known personality, the film offers insights on local and global problems and policies illuminated by the USA and Europe and beyond."

The sculpture was carved on a plinth of a linden tree in a field on the outskirts of Rozno, a village about five miles from Sevnica.

The work does not attempt to create an exact likeness of the American first lady, but rather hints at her appearance.

She has been carved wearing a pale blue wraparound outfit, mirroring the one she wore to the inauguration of her husband, President Donald Trump, in 2017.

Downey told CNN that he was inspired to create the piece due to what he calls the "anti-immigration narrative" coming out of the US and from Donald Trump in particular. He noted that it was a "blatant contradiction" to have a president, who has made halting immigration a cornerstone of his presidency, married to an immigrant whose first language is not English.

He also claimed that the work is the first monument in the world dedicated to this first lady.

Despite Downey's political message behind the work, the sculpture has received mixed reviews from locals.

"If the monument was meant to be a parody, then the artist has been successful," one individual told Agence France-Presse. "We in Sevnica can only laugh and, at the same time, hold our heads in our hands over their (the Trumps') catastrophic reputation."

Another individual wrote on Instagram: "So sad that you killed a beautiful, healthy, carbon-sequestering tree for selfish and self-serving reasons."

The project has nevertheless received positive responses from fans. "Brad, I think this is my favorite project of yours," one individual wrote on Instagram.