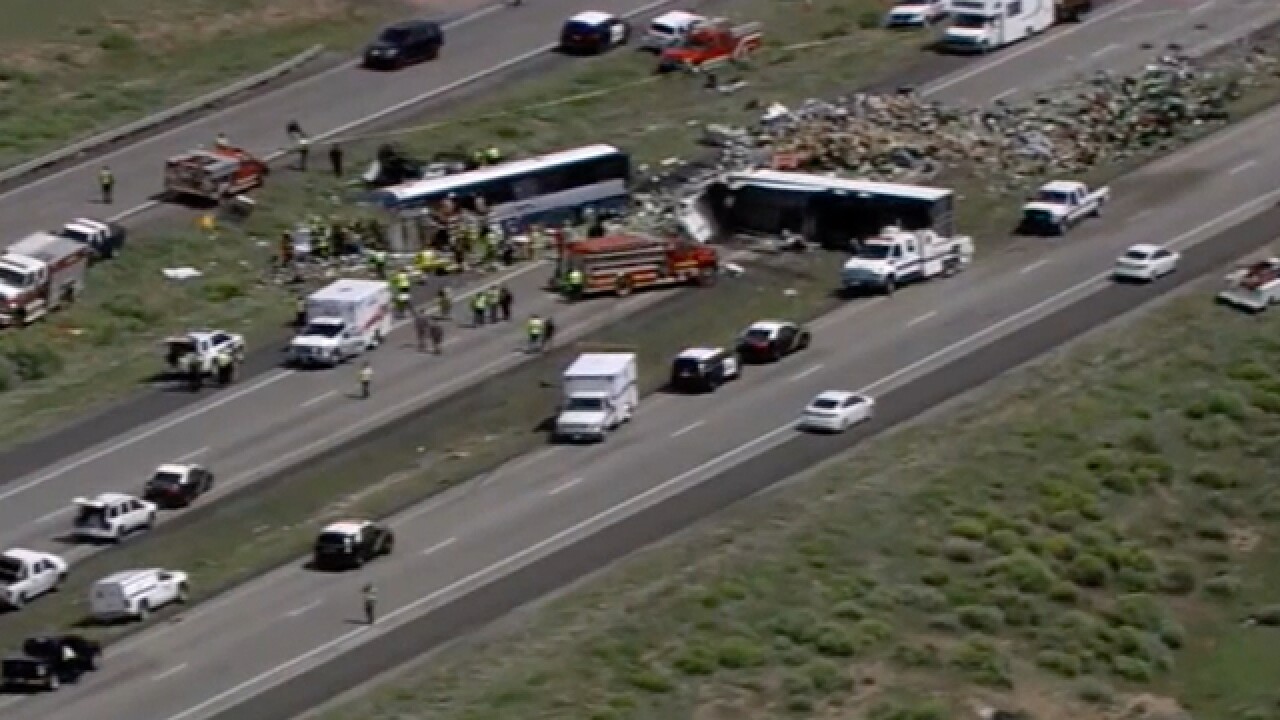 Copyright 2018 Scripps Media, Inc. All rights reserved. This material may not be published, broadcast, rewritten, or redistributed.
<p>New Mexico authorities say multiple people have been killed in a commercial passenger bus crash along Interstate 40.</p>

(CNN) -- At least eight people have died as a result of a tractor-trailer's head-on crash with a nearly packed Greyhound bus in northwestern New Mexico, officials said.

Dozens of passengers were seen trying to climb out of the windows of the bus after Thursday's crash on Interstate 40, while some bystanders walked among piles of debris carrying ladders.

Most of the 49 people on the bus, including adults and children, were taken to area hospitals with different degrees of injuries. The driver of the truck sustained injuries that were not life-threatening, the state police said.

Authorities had said seven were dead on Thursday, but the death toll rose on Friday, when the state medical investigator's office said it received one more body from a hospital.

In a statement, the New Mexico State Police said the identities of the dead would not be released until their next of kin were notified.

The horrific scene began around 12:30 p.m. when a semi truck was traveling eastbound along I-40 in McKinley County and it blew a tire. The driver lost control of the vehicle, which crossed the median and struck the westbound bus, New Mexico State Police Officer Ray Wilson told reporters.

Aerial footage by CNN affiliate KRQE showed the bus damaged in front, but upright, in the grass median. Nearby was an overturned truck cab and a trailer on its side, with what appeared to be produce boxes spilled on the median.

People who'd been driving on the highway, like Chris Jones, stopped to help. Jones said he jumped out of his vehicle to help the injured when he didn't see any ambulances around.

"Just trying to help them, comfort them, calm them down, get them taken care of until EMS got there," Jones told CNN affiliate KCAL.

Jones, who has medical training as a Navy veteran and a volunteer firefighter, said he first tried to get an idea of who was hurt.

Another witness, Marc Gonzales, said the scene was a "complete catastrophe," with skid marks on the side of the road. Passengers tried to climb out the bus windows and bystanders grabbed ladders from their vehicles to try to rescue them, he said.

"It's by far one of the worst accidents I've encountered. ... It was horrible," Gonzales told KRQE.

"You could tell that people were distressed, screams were coming from the bus," he said.

Twenty patients were initially taken to the Gallup Indian Medical Center in Gallup, acting chief medical officer Dr. Kevin Gaines told reporters. Some families were among the patients, as well as four children, he said.

Ten patients were being treated for injuries ranging from broken bones to bruises, he said. One was in critical condition and two were in serious condition, Gaines said.

Six patients were released and four others were transferred to other medical facilities in New Mexico and in neighboring Arizona, Gaines said.

The Los Angeles-bound Greyhound bus had originally departed from St. Louis and had just made a stop in Albuquerque prior to the crash, the company said.

"Our first priority is taking care of our passengers and their families as this incident has deeply impacted all involved," the company said. "Our thoughts and prayers are with everyone as we continue to give our support to all affected.

The National Transportation Safety Board said it was sending 10 investigators to the site.

This is not the first deadly crash involving a passenger bus in the state in recent months.

In July, the driver of a passenger bus tried to avoid a crash along I-25 near Bernalillo, but lost control and rolled crossing the highway. The bus was then plowed by a semi truck traveling in the opposite direction. Three people were killed in that crash, CNN affiliate KRQE reported.

Correction: An earlier version of this story misstated the route of the bus. The story has been updated to reflect that the bus made a stop in Albuquerque before the incident.