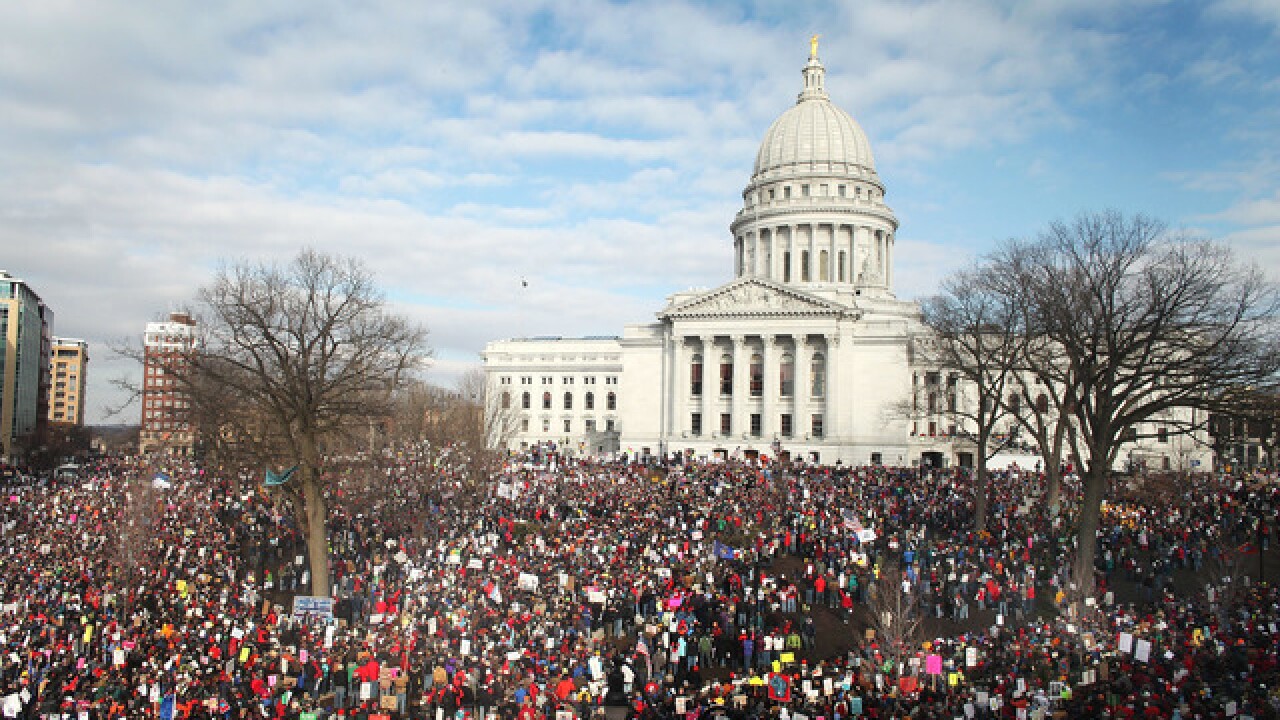 MADISON, Wis. (AP) — Wisconsin Republicans, just weeks away from losing control of both the governor and attorney general's offices, planned dramatic lame-duck votes Tuesday on a sweeping attempt to limit the powers of incoming Democrats, a move that opponents decried as a last-gasp power grab and attempt to invalidate the election.

Another Republican proposal to move the 2020 presidential primary election from April to March appears to be dead. A Republican-controlled committee did not advance the plan Monday, and the panel's co-chairs said it didn't have enough votes to pass.

Once approved by the Legislature, the other measures would head to Republican Gov. Scott Walker for his signature just five weeks before he is replaced by Democrat Tony Evers. Republicans maintained majority control of the state Legislature in the November election, and thanks to the rare lame-duck session, Walker has a chance to leave one final mark on the state after losing his bid for a third term last month.

The Wisconsin maneuvering is similar to what Republicans did in North Carolina two years ago and to what is being discussed in Michigan before a Democratic governor takes over there. The bills were moving quickly in Wisconsin, having just been made public late Friday afternoon.

They also sparked protests at the Capitol reminiscent of the raucous demonstrations that resulted when Walker all-but eliminated collective bargaining for public workers in 2011. Those protests were massive and lasted weeks, but Republicans were poised Tuesday to complete their work much more quickly.

Republican Rep. John Nygren, co-chair of the committee, downplayed the lame-duck proposals and said the goal was to establish balance in power between the Legislature and governor. Nygren said it was a positive step that would "bring us together to solve the problems of the state."

Walker signaled support for the moves Monday, and his office has been working with Republicans on crafting the package. But Evers called the unusual lame-duck session "rancor and politics as usual." The last lame-duck session in Wisconsin was in 2010 when Democrats tried unsuccessfully to enact labor agreements.

Republicans had proposed moving the date of the 2020 presidential primary to improve the chances of a conservative Supreme Court justice, who was appointed by Walker and is on the ballot that year. But election clerks objected, citing the $7 million cost and logistical challenge of holding a third election within a two-month period.

It didn't even get a vote in the committee. Republican committee co-chairs said after the meeting that it didn't have votes in the Senate to pass.

The remaining proposals would weaken the governor's ability to put in place rules that enact laws and shield the state jobs agency from his control. Republicans also want to limit early voting to no more than two weeks before an election.

Other measures would weaken the attorney general's office by allowing Republican legislative leaders to intervene in cases and hire their own attorneys. A legislative committee, rather than the attorney general, would have to sign off on withdrawing from federal lawsuits. That would stop Evers and Kaul from fulfilling their campaign promises to withdraw Wisconsin from a multi-state lawsuit seeking repeal of the Affordable Care Act.

They made opposition to that lawsuit a central part of both of their campaigns and handcuffing their ability to get Wisconsin out of the case has fueled Democratic arguments that Republicans are trying to invalidate the will of voters.

Opponents have said many of the changes would likely be challenged in court, a process that could create even more gridlock in state government next year.

"This legislation is an effort to undermine the results of the elections we just had for governor and for attorney general," Kaul told reporters Tuesday. "The state is going to be mired in litigation in 2019."