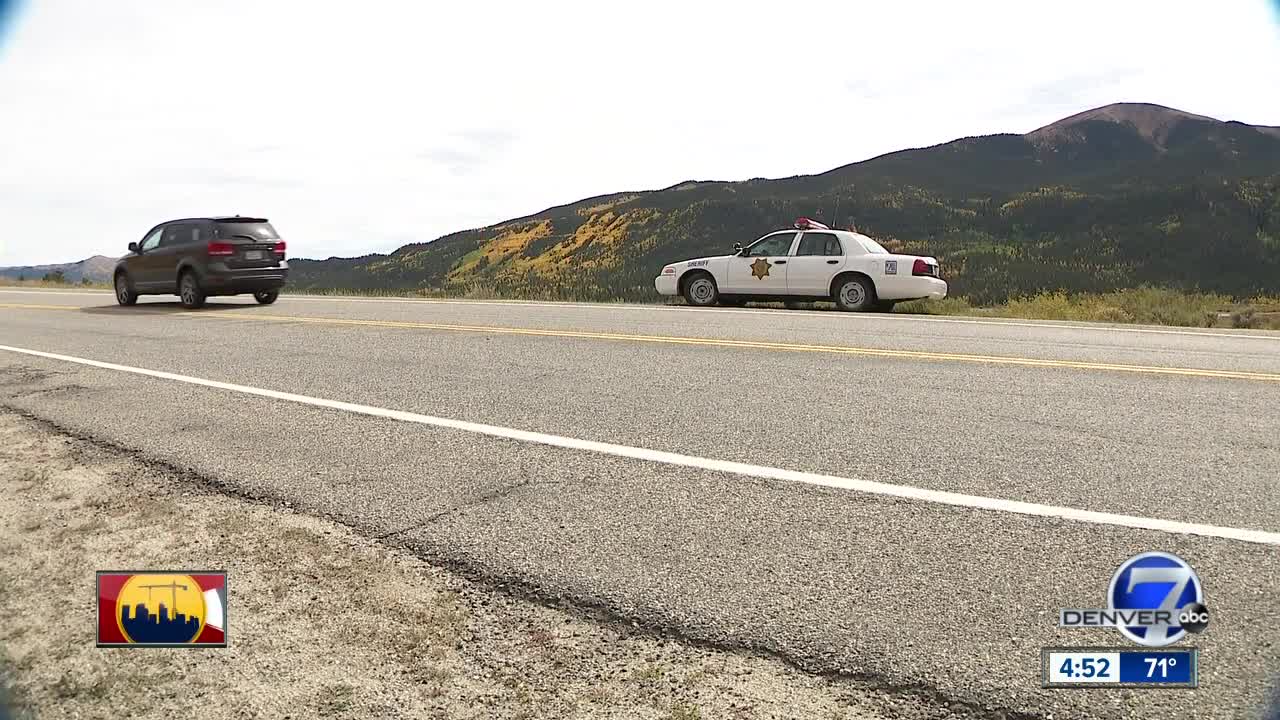 TWIN LAKES, Colo. — Tourists are pouring into small mountain communities across Colorado as the changing of the seasons is underway. Twin Lakes, just south of Leadville, is no exception to this annual migration, so the sheriff’s office and a few fun-loving community members came up with a way to deal with those passing through at high speeds as they head to Aspen.

“September is our busiest month and it is because of the leaf change,” Twin Lakes Inn general manager Andy Wald said. “The forest service says about three thousand vehicles (pass through) per day.”

There is a large speed limit reduction coming into town, from 55 to 30 miles per hour, but as traffic passes through — many on their way to Aspen — locals say it can even get dangerous.

“It can be risky,” Sweeney said about crossing the street, which many people do to get to the only public restroom in the area.

Add to that the fact that the Lake County Sheriff’s Department patrols 384 square miles with only a handful of deputies. With this in mind, Twin Lakes wanted help, and decided to get creative.

“For a split second it works most of the time,” general store owner Bob Mathes said.

“It’s a very effective means of controlling traffic,’ another longtime resident who did not wish to be identified for this story added.

As unsuspecting tourists pass into the outskirts of town, brake lights abound.

“Almost 100% of the traffic that comes through, you can watch them hit the brake lights,” Wald said from the porch of the Twin Lakes Inn.

What those tourists are seeing is a Lake County Sheriff’s patrol car, parked in a variety of places near the edge of town. Inside, the deputy is wearing a uniform, hat, and aviator sunglasses.

“We were going a little too fast so we slowed down,” tourist Brian Steckroth from South Carolina said. “Then I look to my left and said, ‘It’s a fake! It’s a mannequin!’”

“Yeah. It’s a dummy,” Sweeney, who is also the President of Friends of Twin Lakes, added.

The car is real, and the lights and sirens still work. The man sitting in the driver’s seat, staring at cars as they come into town, is not.

“First time through you actually think it’s real,” Jack Friedman, a resident of Aspen, said as he was passing through town.

“They actually can’t believe it when they look inside,” Mathes added.

The Lake County Sheriff’s Department is even in on it.

And he works at what he’s designed to do.

“It really does work in our community to slow vehicles down,” Andy Wald said.

And what does this town call their “simulated sheriff” that slows speeders?

Dubbed a Deputy, he even has his own Facebook page with 131 followers.

“Any day there could be 100 people there taking pictures of him,” Bob Mathes said.

But even though the dummy hasn’t written a single ticket in his 26 years on the job, that doesn’t mean it’s a speeder’s free-for-all in Twin Lakes.

“We’ve got Manny here on the east side of town but sometimes on the west side of town is where the real sheriff hangs out,” the GM of the town’s inn said. “That’s always fun for us too because it gives Manny a bit of validity.”

Residents call Manny a “creative solution” to the serious problem their community faces every year, but most will admit to the fun they have watching the road and the inevitable reactions.

“He’s as much a part of the community as anyone else,” Mathes said from behind the counter of his general store.