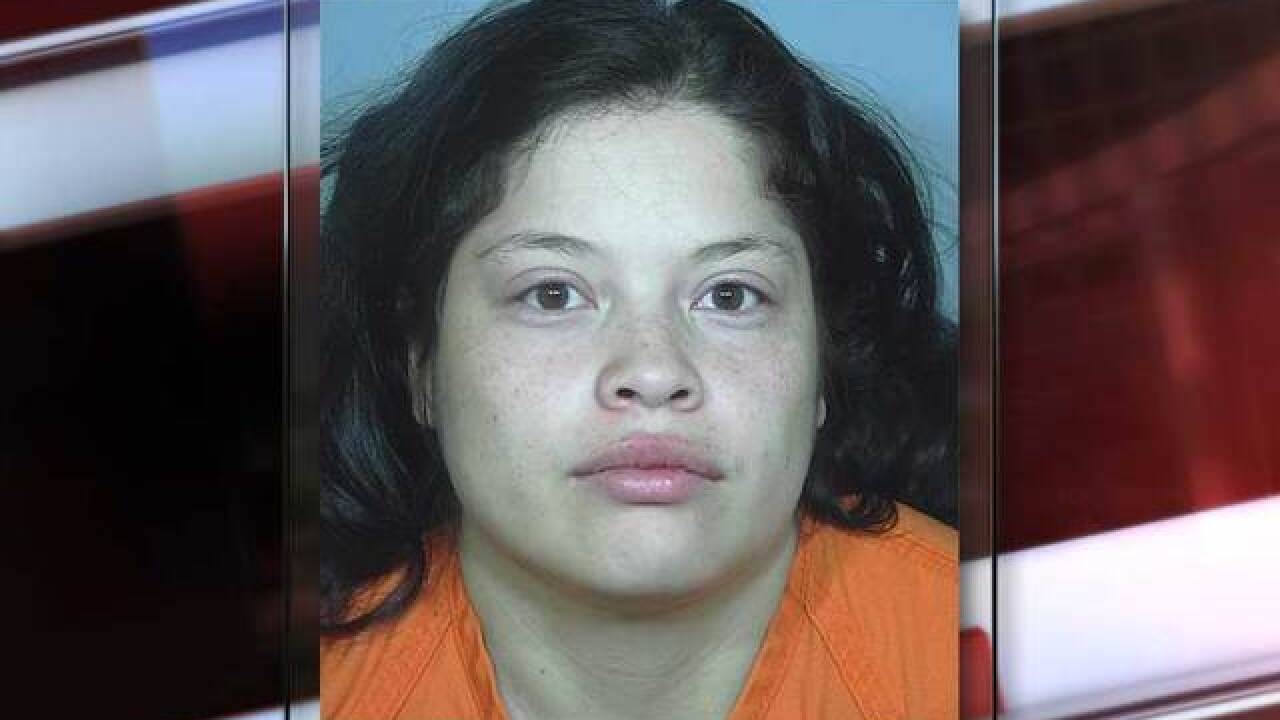 The Colorado mother accused of abusing her child in a video that went viral appeared in court Thursday.

Katrina Kennedy-Flores, 27, was arrested Wednesday night after the disturbing video was posted on Facebook and YouTube, igniting public outrage. She is being held in Weld County Jail on two counts of misdemeanor child abuse.

While the alleged abuse was videotaped at the home of an acquaintance in Lochbuie, where Kennedy and her young son were staying, an arrest affidavit states that police arrested Kennedy-Flores at a southwest Denver apartment complex.

The toddler was taken into protective custody, Lochbuie police stated on Twitter. The boy's father told Denver7 the child is 2 years old.

In court Thursday, Kennedy-Flores appeared by video conference. She was in a wheelchair and wearing an orange jumpsuit, according to Denver7 Reporter Mark Boyle, who was in the courtroom.

Prosecutors described the video as "horrifying" and told Judge Dana Nichols that Kennedy-Flores berated the boy and used language that a prosecutor was not comfortable repeating in court.

The court-appointed public defender stated that Kennedy-Flores is a single mother on permanent disability. The defense attorney said Kennedy-Flores suffers from scoliosis and cerebral palsy and typically walks with a cane.

The defense argued that Kennedy-Flores has a very low risk factor for tampering with evidence or witnesses and has no prior criminal history.

The prosecution pointed out that the woman who recorded and released the video, who Denver7 is only identifying as Sue, has already received threats.

Judge Nichols barred Kennedy-Flores from having any contact with the victim, the witnesses and anyone under 18. Nichols set the bond for Kennedy-Flores at $3,000.

Nichols said she considered the video evidence in her ruling, as well as photos of the child's body that showed bruises on his body.

The arrest warrant affidavit obtained by Denver7 shows Lochbuie police were first made aware of the video on May 9 -- nine days before the mother was arrested.

In the affidavit, a detective stated the video was provided by a man who said he received it "from a friend," but he did not know where the mother and child lived.

The man said, "It's a video of [the toddler] being hit by his mother Katrina," according to the affidavit.

In the arrest affidavit, the investigator writes the mother is heard on the 16-minute video ranting:

The detective writes that the video shows the mother go up to a playpen holding the boy. She grabs a child's booster chair, raises it above her head and "violently slams it into the playpen near or on the Victim [child]," the detective writes, adding that he "could hear the Victim screaming and crying."

RELATED |  How to report child abuse, neglect in Colorado

The mother walks away briefly, then returns to the playpen and "begins to hit on or around the Victim again and again," the detective writes.

According to the arrest affidavit, the investigator said he called Kennedy-Flores and she said:

The woman who recorded the video posted it on Facebook this week. The woman told Denver7 she posted it because she felt like police were not doing enough.

The woman said she had witnessed the mother's abusive behavior toward the child during the time they lived together.

The woman explained she didn't intervene because she is disabled and has a hard time getting around. She was also fearful for her life and her 17-year-old son, who can be seen in the video.

"I wish I had called 911 but me and him were terrified, we were scared," she said.

MORE | How the Facebook community helped rescued a child in jeopardy

On Wednesday, the video went viral with thousands of people sharing it on Facebook, others seeing it on YouTube and many people emailing it to Denver7 and other media outlets.

According to arrest warrant, an investigator spoke to a second witness on Wednesday. That witness said she cared for the little boy from May 2-7. She said she took pictures of the boy's bruised body during that time, according to arrest affidavit.

The investigator called the mother Wednesday night. According to the arrest warrant, the mother said the child had been taken by Denver Human Services.

The mother was arrested about an hour later.

Lochbuie police said they have not had previous contact with the mother.

Denver Human Services said due to federal privacy protections, they can not provide any details regarding families they may have contact with – even if someone discloses it on their own.

"I can tell you that we’ve received multiple calls into our hotline and are aware of the video," a DHS official said.

The Colorado Department of Human Services said they are aware of the video and sent Denver7 this statement:

"The Lochbuie Police Department has announced that an arrest has been made and the child is safe in protective custody. To protect the confidentiality of children and families potentially involved, and in accordance with Colorado statute, we cannot comment further. However, we deeply appreciate the outpouring of concern from Coloradans.

"CDHS encourages anyone witnessing a child in a life-threatening situation to call 911 immediately. If it is not an emergency, call 1-844-CO-4-KIDS (1-844-264-5437) to report all concerns for a child's safety and well-being to the Colorado Child Abuse and Neglect Hotline."