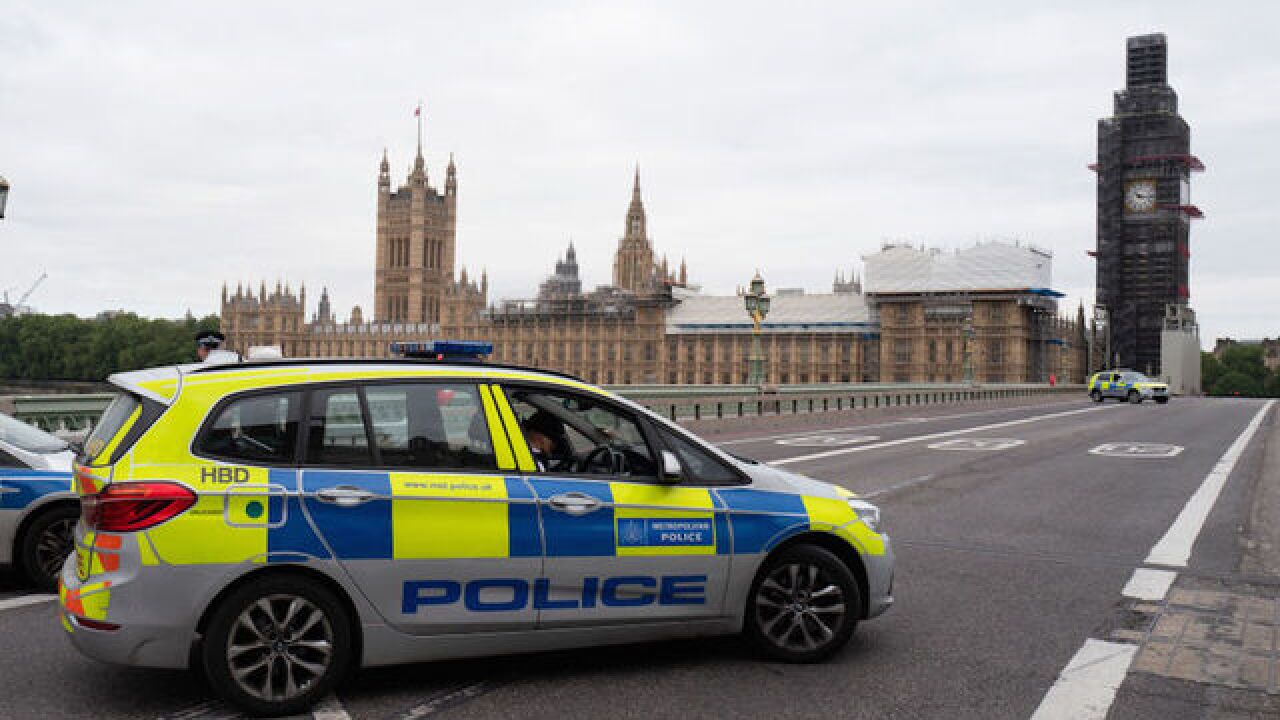 Image copyright 2018 Getty Images. All rights reserved. This material may not be published, broadcast, rewritten, or redistributed.
Gareth Cattermole
<p>Police officers secure Westminster Bridge going towards the Houses of Parliament after a vehicle crashed into security barriers, injuring a number of pedestrians, outside the Houses of Parliament on August 14, 2018 in London, England. One man has been arrested in connection with the suspicious crash which is still being investigated. </p>

A 29-year-old man arrested after he crashed a car into security barriers outside the UK Houses of Parliament in what's being treated as a terrorist incident was identified by police Wednesday as a UK national originally from Sudan.

The man has not yet been named by London's Metropolitan Police but the force said in a statement that it was "satisfied" it now knew his identity.

Three people were injured when the suspect's car careened into cyclists and pedestrians during the Tuesday morning rush hour outside one of London's most iconic locations. He was arrested at the scene and is currently being detained at a south London police station.

Little else is yet known about the suspect, who has now been arrested for attempted murder, the police statement said. He was initially arrested on suspicion of the commission, preparation and instigation of acts of terrorism.

Detectives continue to search an address in Birmingham, police said. They have concluded searches at two other addresses in Birmingham and one in Nottingham. Both cities are in the Midlands, in central England.

Metropolitan Police Assistant Commissioner Neil Basu said Tuesday that the suspect was "not cooperating" with police.

He was not believed to have been known to MI5 or counter-terrorism police, Basu said.

No other arrests have been made.

Roger Godsiff, a member of Parliament who represents Birmingham Hall Green, said on Twitter the suspect was believed to have been from his constituency.

"I have told the police and security services that they have my total support in doing whatever is necessary to protect the public in London and Birmingham," he said.

The vehicle used in the attack left Birmingham late Monday night and arrived in London just after midnight Tuesday, authorities said. The car was in the Tottenham Court Road area of the capital for several hours before being driven round the Whitehall and Westminster areas from about 6 a.m. to the time of the attack, just after 7:30 a.m. Tuesday.

Security in the area has been increased since a pair of deadly attacks near landmarks in the British capital last year.

The first took place in March 2017, when a 52-year-old British man, who had been living in Birmingham, rammed a rental car onto the sidewalk on Westminster Bridge, killing four. He also stabbed an unarmed police officer. Weeks later, in June, seven people were killed when a white van struck pedestrians on London Bridge.

Authorities are now trying to learn more about the suspect in Tuesday's attack in Westminster, though he is "not cooperating," Basu said.

He was not believed to have been known to MI5 or counter-terrorism police, Basu said.

The driver was alone in the car and no weapons were recovered at the scene, an area popular with tourists visiting the Houses of Parliament and Westminster Abbey.

Authorities do not believe there is any further danger to Londoners or the wider UK related to the crash, Basu said. The official threat level for terrorism in the United Kingdom remains "severe," meaning an attack is highly likely.

Reports on the attack dominated UK front pages Wednesday. The man's car collided with cyclists and pedestrians before crashing into the barrier. He was then detained at gunpoint.

Three people were injured but no one was killed. A man and a woman were treated in the hospital but have since been discharged, and another man was treated at the scene. Parliament is currently in summer recess, meaning the normally bustling center of British government was emptier than usual.

"I heard some noise, and someone screamed. I turned around and I saw a silver car driving from the crossing -- very fast and close to the railings, maybe even on the pavement," witness Ewelina U. Ochab said.

"There was a loud bang from the collision and a bit of smoke. The driver did not get out. The guards started screaming to people to move away. One elderly man rushed me to hide behind a monument, just in case."

UK Prime Minister Theresa May chaired an emergency COBRA meeting Tuesday to discuss the incident, which she called "shocking."

"For the second time in as many years the home of our democracy, which is a potent symbol of our precious values of tolerance and freedom, has witnessed terrible scenes just yards from its door," said May.

"I would urge the public to remain vigilant -- but also to come together and carry on as normal, just as they did after the sickening attacks in Manchester and London last year. The twisted aim of the extremists is to use violence and terror to divide us. They will never succeed," May said.

US President Donald Trump also weighed in on Twitter.

"Another terrorist attack in London...These animals are crazy and must be dealt with through toughness and strength!" Trump said.

Trump and London Mayor Sadiq Khan have sparred in the past over immigration policy. The US President drew the ire of a number British politicians last year for appearing to criticize Khan in the wake of the June terror attack in London.

"I think all of us are angry when it comes to these acts of terror being committed. The British Parliament, the Prime Minister Theresa May, works closely with me as the Mayor to make sure we do all that we can do," Khan said in an interview with CNN.