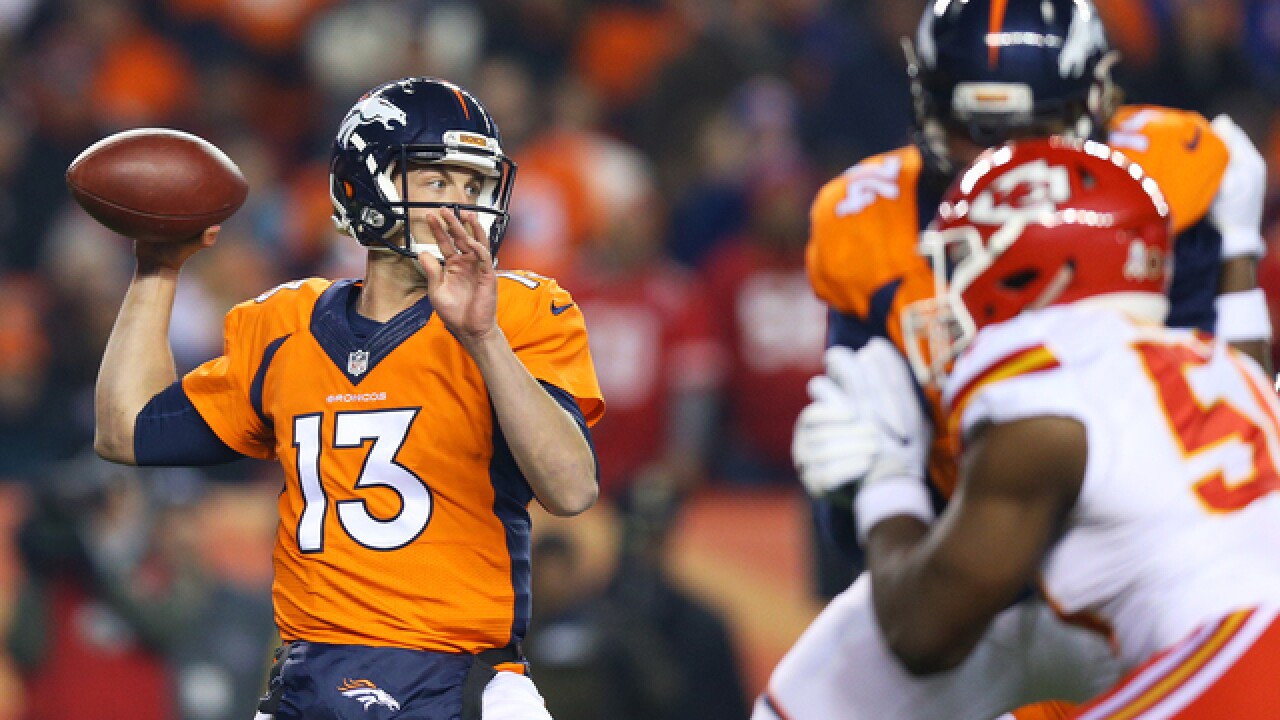 Justin Edmonds
<p>DENVER, CO - NOVEMBER 27: Quarterback Trevor Siemian #13 of the Denver Broncos throws in the first quarter of the game against the Kansas City Chiefs at Sports Authority Field at Mile High on November 27, 2016 in Denver, Colorado. (Photo by Justin Edmonds/Getty Images)</p>

DENVER — The Romo Saga is over.

The Broncos lost out on Tony Romo a second time.

It’s generally forgotten that the Broncos tried to sign the QB in 2003.

In the 2002 season the Broncos’ starting quarterback was Brian Griese, who had become John Elway’s successor in 1999. But Griese was injury- and accident-prone. He missed 13 games in four seasons because of a frail body, and he also tripped over his dog on a staircase, causing another injury.

Griese’s record as a starter was 27-24, but he had mammoth cleats to fill. After back-to-back Super Bowl victories with Elway, the Broncos didn’t win a division with Griese, and only made the playoffs once as a wild card, without Griese playing in the postseason game in Baltimore.

The Broncos were searching for another starter in 2003 – and landed former Cardinals’ quarter Jake Plummer, who was a free agent, in March. Griese was finished here. Coach Mike Shanahan couldn’t find any trade takers, so he released Griese in early June.

Shanahan was looking for a young backup to develop – veterans Gus Frerotte and Steve Beuerlein had filled their replacement role – and liked a kid from his alma mater. Tony Romo was undrafted out of Eastern Illinois, where Shanahan had once been the starter as a freshman before rupturing a lung in the spring game. The lung was removed, and Shanahan’s playing career was over, and his coaching career (while still in school) began.

Romo was invited to the 2003 combine as a fill-in quarterback, but didn’t impress most NFL teams.

Shanahan offered him a sizable free agent bonus ($20,000) and seemed in position to sign him. However, another Eastern Illinois graduate, new Cowboys assistant head coach and quarterback coach Sean Peyton, also liked Romo – and had tried in vain to persuade the Cowboys to draft him in the fifth round. However, Peyton was permitted to offer Romo a $10,000 bonus to sign.

Romo took half the cash to sign with Dallas.

In a story for espn.com a couple of years ago, Jean-Jacques Taylor quoted Shanahan and Romo.

Romo said the money “was a non-issue for me. I never make certain decisions in life based on money. I probably would not have gone anywhere where there was a young great player in position, just because eventually you want to grow into being that guy."

The Broncos had just signed Plummer, still a young quarterback on the rise. He would get the Broncos to a 13-3 record, a division title and the AFC Championship in 2005

The Cowboys had three quarterbacks, including potential starter Quincy Carter (previously a second-round pick). Romo must have thought he could “eventually" beat out the Cowboys contenders. He did. Carter became a drug casualty in 2004. The others fell away, and head coach Bill Parcells brought in veteran Vinny Testaverde, and Drew Henson. A year later, Drew Bledsoe came in and became the starter. Finally, early in 2006, Romo became the starter.

In 2006 the Broncos traded up in the first round and drafted Jay Cutler. Plummer started the first 11 games, then was benched by Shanahan, who turned to the rookie.

As we know, Cutler never succeeded in Denver and cost Shanahan his job. Plummer never played again after his announcing his retirement at season’s end (despite being traded to Tampa Bay).

Romo was the Cowboys’ starter for 10 years until he suffered serious injuries in 2015 and ’16.

Dak Prescott, who was the Broncos’ second favorite to draft last season, took over, and Romo’s career in Dallas concluded.

Funny how things work out.

The naked-and-afraid Cutler can’t smell a job these days, and Romo turned down a chance to play for the Broncos (or the Texans), choosing to become a broadcaster.

Romo could have become a Hall of Famer if he had won a Super Bowl with the Broncos. Instead, he likely will fall short of the honor.

And Phil Simms, who beat the Broncos in the Super Bowl with the Giants, is replaced by Romo on the No. 1 CBS team with Jim Nantz. Oddly enough, most Denver fanatics might be more excited that Simms is out because of Romo than they would have been if Romo came to Denver.

Elway would have made a run at Romo if he had been released, and the Broncos’ exec VP could have talked to him and got a feel for his attitude and his health, and his willingness to take a severe cut in salary with an incentive-laden contract.

Instead, Paxton Lynch is in Denver instead of Dallas (which wanted him last year in the draft), and Prescott, who could have been in Denver, is in Dallas, and Romo is in the broadcasting booth (and could be the analyst for the Broncos-Cowboys game).

And Trevor Siemian will be the Broncos’ starting quarterback again.

It was a strange saga.