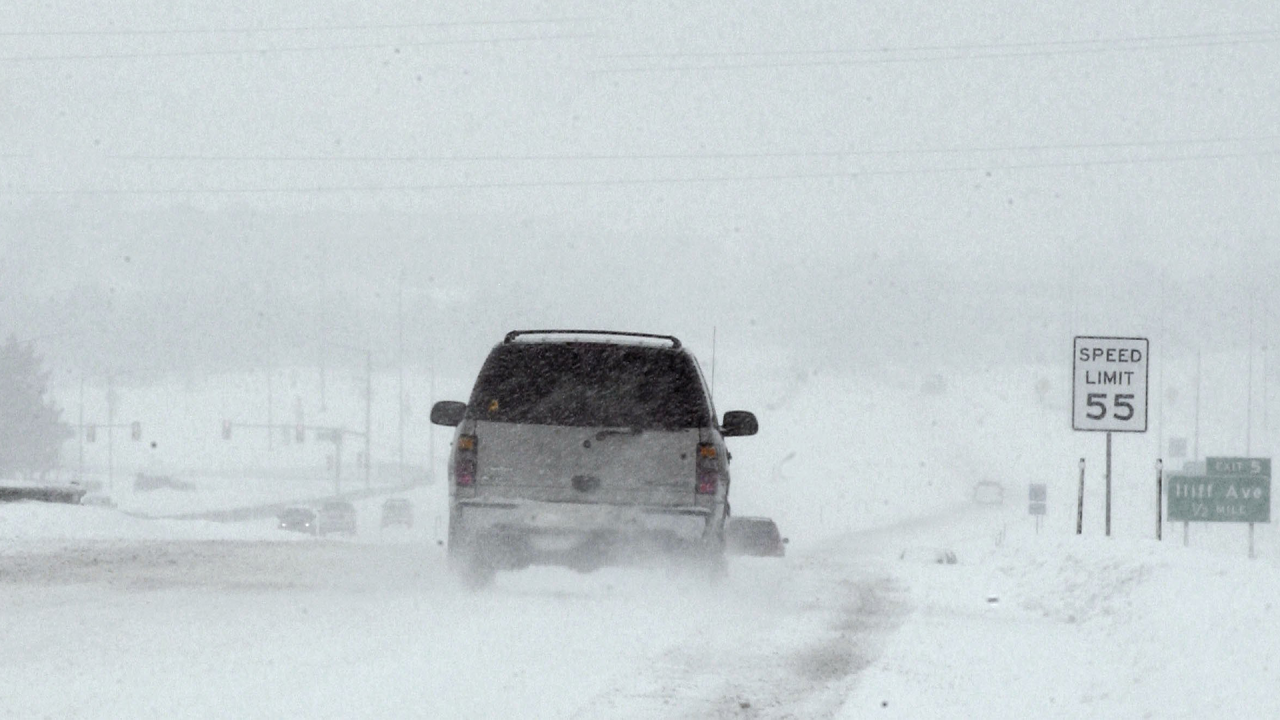 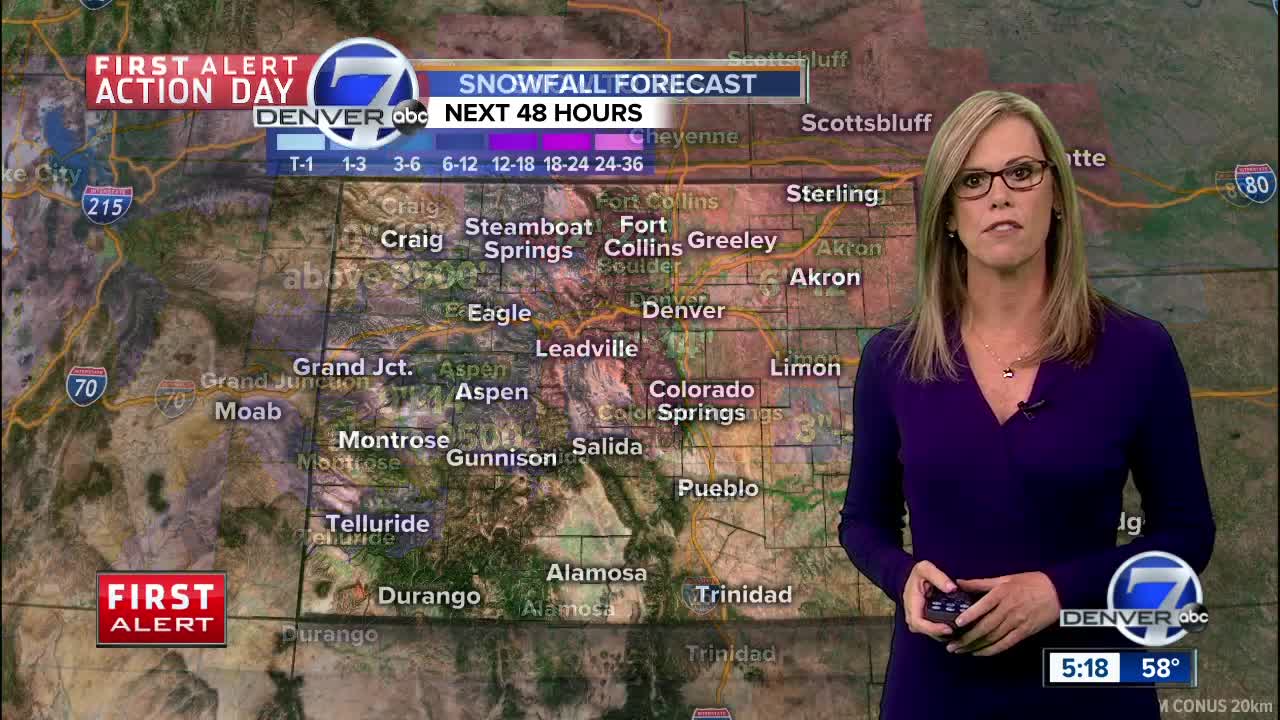 DENVER — A crush of travelers is expected to jam Colorado highways and airports over the Thanksgiving break, but an upcoming winter storm could make it nearly impossible for those holiday travelers to get anywhere.

Beginning early Monday, snow is forecasted to fall across the northern mountains and spread southeast to the Denver-Fort Collins area during the evening, and across the rest of northeast Colorado by about midnight. The heaviest snow is likely to occur late Monday into the early morning hours Tuesday. Denver will likely see about a foot of snow while the mountains and foothills may get more.

The snow will end from west to east during the day Tuesday. However, more upslope and a few hours slowing could result in two feet of snow in the foothills west and southwest of Denver as heavy snow would continue for much of the day Tuesday.

Here are the expected snow totals for the next 48 hours:

While blizzard conditions are not expected, north winds at 15 to 30 mph will produce some blowing and drifting snow on the plains during the day Tuesday, which may hamper plowing of roads. Conditions will improve Tuesday afternoon as the snow moves eastward and winds decrease.

There is a chance that travel could become nearly impossible across the I-25 urban corridor and across much of the northeast plains including the I-76 corridor by Tuesday morning, according to the NWS.

The following is a regional travel forecast from the Colorado Department of Transportation:

Northeast Colorado and metro Denver
According to a 6:15 a.m. update from the National Weather Service on Monday, this storm is expected to drop 8-16 inches of snow, which will cause significant travel difficulties. Driving conditions will deteriorate Monday evening into Tuesday afternoon, with winds at 15-30 mph producing blowing and drifting snow. The NWS says, “While there is some uncertainty about this storm’s impact on the Denver area as it may be on the edge of this storm, there is a chance that travel could become impossible in the Denver area Tuesday morning, so residents should be prepared for that possibility.”

Very heavy snow tonight into Tuesday with accumulations over a foot north of I-70. Travel will be difficult or impossible Tuesday! #cowx pic.twitter.com/UBcasRFrGH

Western slope, northwest, southwest and central Colorado
Hazardous travel can be expected before, during and after the (Thursday) Thanksgiving holiday. Colorado’s northern mountains, western slope, southwestern mountains and central mountains may see 5-10 inches of snow by Tuesday. A second, stronger storm will dig into the western regions of the state Wednesday night and continue through Thanksgiving Day and into Friday. This second storm wave will likely bring significant snowfall totals, particularly for the southern mountains.

Moderate #avalanche danger issued by @COAvalancheInfo for much of #Colorado. Check conditions before you head to the backcountry today. See the yellow shaded areas below. pic.twitter.com/uXpGwQKS8m

Southeast Colorado
Currently there are no weather advisories issued for the southeastern portions of the state, including Colorado Springs and Pueblo. However, there is a 40-60% chance of less than one inch of snow on Tuesday morning, which could still impact morning commutes.

Skies clear out on Wednesday and temperatures stay chilly. For Thanksgiving, we're expecting partly cloudy skies and highs in the low 40s. Another storm system may impact Colorado by Friday. Stay tuned.

If you're driving during this time, officials suggest motorists have the following items in their vehicle in case of an emergency:

Denver International Airport is expecting more than 2-million travelers over the holiday break. The busiest days will be the Wednesday before Thanksgiving and the Sunday after the holiday, which is projected to be both the busiest day of the week and the entire holiday season with over 211,000 travelers passing through DIA.

The storm's impact on flights is unknown at this time, but some airlines have already adjusted their policies in anticipation of significant delays or cancellations. Here are their statements regarding the upcoming storm:

United: "We have a waiver in place for customers traveling to, from and through Denver. We’ll continue to monitor the situation and provide updates as we move further into the holiday travel period."

Southwest: “Customers who are holding reservations to/from/through Denver on Monday or Tuesday may rebook in the original class of service or travel standby (within 14 days of their original date of travel between the original city-pairs and in accordance with our accommodation procedures) without paying any additional charge.”

Frontier: “In preparation for the winter storm moving through the Rocky Mountains, Frontier has enacted a travel advisory that allows for customers traveling through Denver or Colorado Springs to make one itinerary change.”

Delta: “At this time, no cancellations are in place or plans to move planes around to avoid them getting snowed in. They are predicting the need for deicing at this time. They have a team of meteorologist monitoring the situation. No fee waivers at this time."

American: "We have issued a travel alert for Denver late Sunday afternoon." Click here for more information on changing your flight.

Here are some tips for dealing with the crowds:

— Check FlyDenver.com and digital monitors inside the terminal for information on TSA security wait times.

— Get to the airport early. TSA says it will use overtime and move screeners around to make sure checkpoints are adequately staffed, and that mostly worked over the summer.

— Check TSA’s website to make sure you’re not carrying prohibited items. “You wouldn’t believe some of the things that we see at our checkpoints each and every day, and the No. 1 thing we hear from passengers is, ‘I forgot it was there,’” said Patricia Cogswell, TSA’s acting deputy administrator.

— Sign up for a trusted-traveler programs like Precheck. It might not always save you that much time — Precheck lines can get long too — but at least you won’t have to take off shoes, belts and light jackets, and you can leave that tablet or laptop in your bag.

— Be patient, and get used to it. Travel demand is booming, so “passengers will continue to experience holiday-level travel volumes throughout the year, but this is our busiest time of the year,” said Kevin Burke, CEO of Airports Council International-North America, an airport trade group.