What changes has Colorado seen since Elijah McClain's death one year ago?

Monday marks anniversary of day he was put in carotid hold, given ketamine 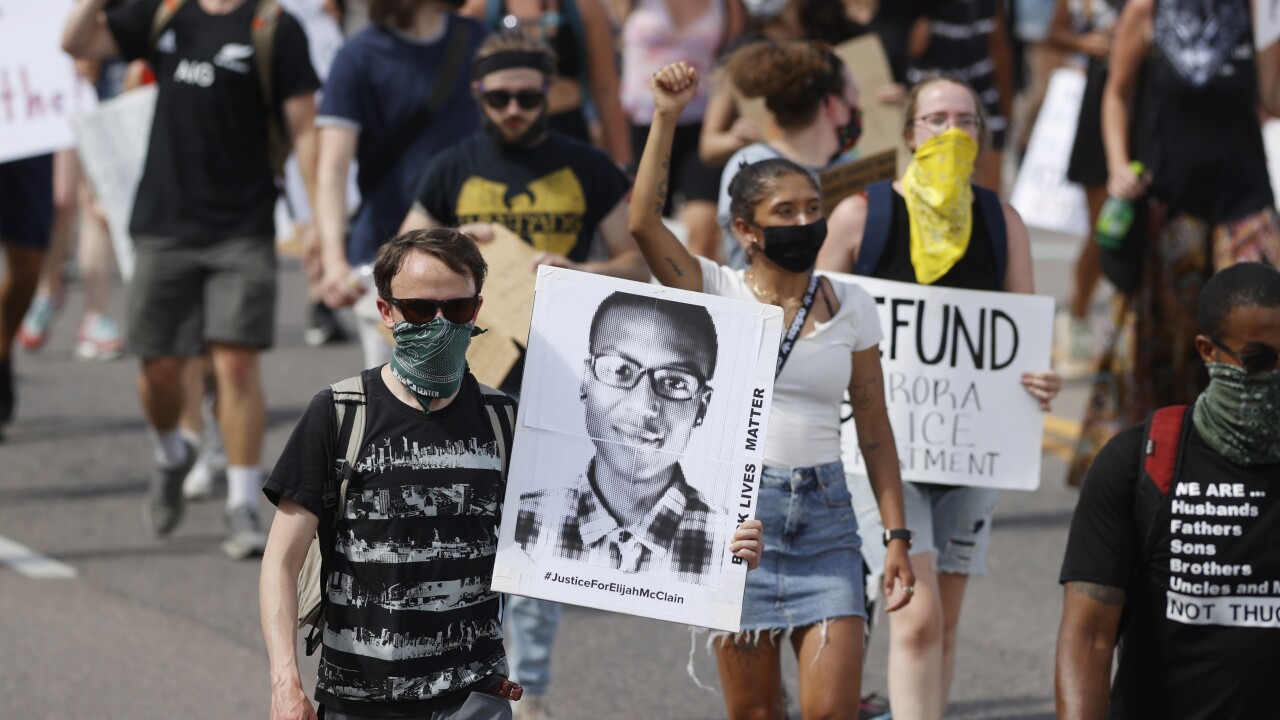 (Copyright 2020 The Associated Press. All rights reserved. This material may not be published, broadcast, rewritten or redistributed.)
David Zalubowski/AP
FILE - In this June 27, 2020, file photo, demonstrators carry placards as they walk down Sable Boulevard during a rally and march over the death of 23-year-old Elijah McClain in Aurora, Colo. In the year since Elijah McClain died after being stopped by police in suburban Denver on his way home from the store, the number of people calling for justice to be done in his case has grown to millions of people around the world. (AP Photo/David Zalubowski, File) 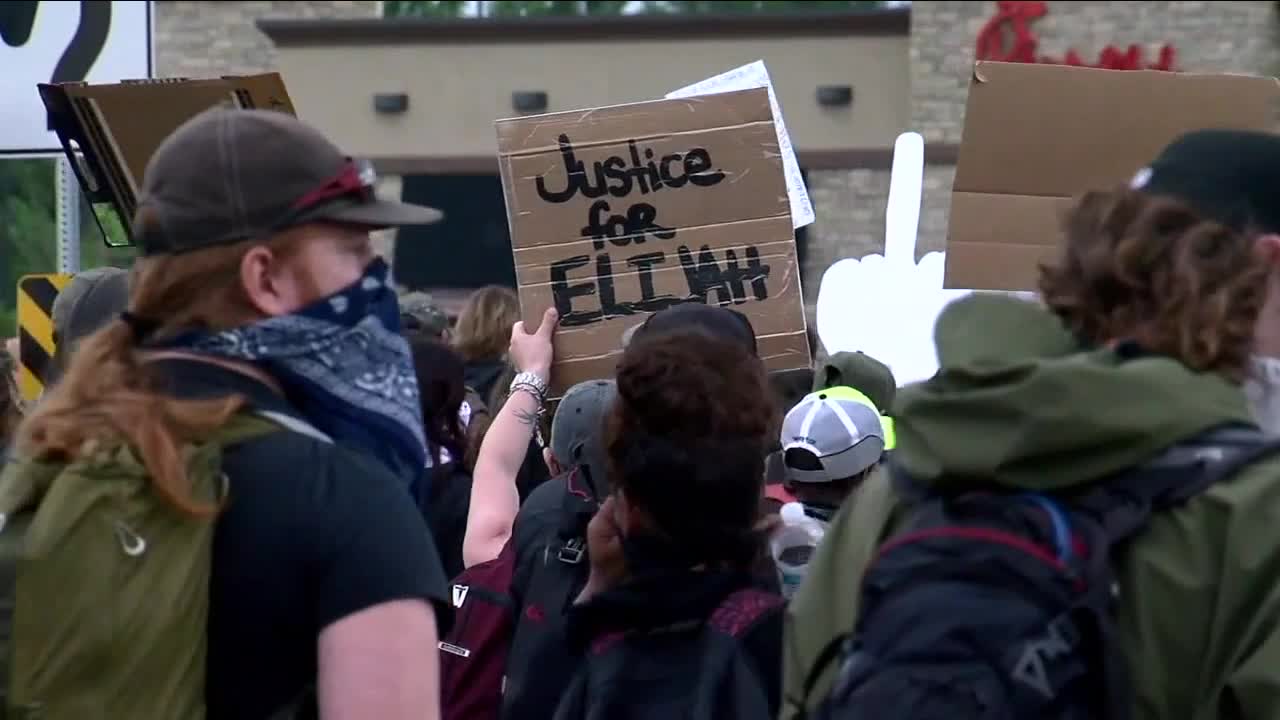 DENVER — For Elijah McClain’s parents, the last year has been filled with sadness and the pursuit of justice as the world learned his name.

His mother, Sheneen McClain, said her son was a happy, energetic young man. She and her family are still waiting and hoping for justice in her son’s case – with multiple independent investigations into Elijah’s death ongoing.

"You will be held accountable for what you’ve done," said his father, Lawayne Mosley.

Monday marks one year since McClain was accosted by police as he walked home from a convenience store in Aurora, put in a carotid hold and given a dose of ketamine, after which he became unresponsive.

He was declared brain dead days later and died on Aug. 30, 2019. The autopsy found his manner and cause of death were undetermined, and the officers were at the time found not to have violated department policies.

McClain’s parents’ words have rung through the streets of Aurora and Denver since, as protesters demand police accountability for McClain’s death and greater transparency surrounding what happened in the incident and other deadly incidents involving police officers and people of color.

Since McClain’s death, there have been several changes in Colorado, in large part due to the amplified calls for justice in the state and nationwide in the past three months. But advocates and McClains family say there is still much more work to be done — namely holding the officers and paramedics accountable for his death.

The state has passed a police accountability law, SB20-217, requiring that officers face imminent threat before using deadly force, among other things, that the governor signed into law in an emotional ceremony.

The law also bans the fleeing felon rule, bans carotid and choke holds, gets rid of qualified immunity for officers who acted unlawfully, requires law enforcement agencies put new use-of-force rules in effect by Sept. 1, requires all officers that interact with the public wear body or dash cameras by 2023, requires body camera video to be released within 45 days in excessive force cases, includes changes to reporting for grand juries and district attorneys, a duty for officers to intervene if another is using excessive force, and more.

Gov. Jared Polis and the lawmakers of color who sponsored the bill credited protests for the bill becoming law in such quick fashion but pledged to continue their work.

“We are not done. This bill does not end the work,” said Rep. Leslie Herod, D-Denver, back in June.

The city of Aurora also banned police from using choke holds and carotid holds, like the one used on McClain. The state health department is also reviewing the use of ketamine in the field, a powerful sedative, of which 500 milligrams were injected into McClain by Aurora fire paramedics, according to a federal civil rights lawsuit filed earlier this month by his family. And the CDPHE is also reviewing the medical waiver program for the use of ketamine, the department announced Saturday.

It also came to light earlier this year that three officers took pictures at the scene of the McClain incident and texted it to Officer Jason Rosenblatt, who was involvedin the original McClain incident and who replied, “ha ha.” A lawsuit has also been filed against the police department for its actions the day of the protest.

Rosenblatt and two other officers – Erica Marrero and Kyle Dittrich – were fired, while another officer, Jaron Jones, resigned. Rosenblatt has since sued over his termination, and others have appealed theirs.

The officers involved in McClain's death were not arrested or charged, which has led to the new calls for justice and outside investigations.

The council is also looking at a proposal from Councilman Curtis Gardner to ban taxpayer money from going to organizations who lobby against police reforms the city and its residents support.

MORE: The world knows his name now: One year later, how Elijah McClain’s death impacted his friends and catalyzed a movement (via our partners at The Denver Post)

There are now five separate independent investigations into his death at the state, federal and local levels. Those include a top-down review of the Aurora Police Department by the state attorney general, an independent investigation by Chicago-based 21CP Solutions to conduct a comprehensive review of the police department, and a review in the Colorado U.S. Attorney’s Office alongside the Department of Justice’s Civil Rights Division.

Vanessa Wilson is now Aurora’s permanent police chief – finalized as the pick in early August after being the interim chief since the very end of 2019. She has pledged to regain the trust of people in Aurora for the police department, which has been mired in multiple controversies over the past year, in addition to the McClain case.

"I am honored, humbled and energized by the trust the city manager, mayor and council have placed in me. Aurora is a city that has experienced many triumphs and tragedies, and we sit at a crossroads for our city's future,” Wilson said after she was named chief.

Her appointment has renewed calls for change within the department.

“If we can get rid of those officers and keep the ones that are doing a phenomenal job I think we will be on the right path to getting a police department that we, all combined, can trust,” said Omar Montgomery, the president of the NAACP’s Aurora chapter, in an interview earlier this month.

Bishop Jerry Demmer with Ministerial Alliance said one of the most important changes moving forward is a partnership between community and police.

"We haven’t gotten there yet in Aurora because we understand that Chief Wilson is brand new and she’s just starting her tenure as chief," Demmer said. "We are communicating but as far as us seeing any kind of positive changes, that has not happened as of yet."

Meanwhile, as McClain’s death garners worldwide attention and demands for accountability, his mother, Sheneen McClain, has pleaded with people not to use her son’s dying words or his name for their own political purposes or demonstrations.

During a recent Facebook Live with Aurora Activist Candice Bailey, Sheneen expressed her disappointment in the outcome of several recent demonstrations.

“Sheneen and I will be the only ones who will ever entertain anything with Elijah’s name ever again," Bailey said. "We’re not going endorse someone else doing something."

Sheneen McClain said until the officers involved in her son’s death are fired, arrested, and charged with a crime, she will continue fighting for justice for her son.

Over the weekend, the McClain family and their attorney, Mari Newman, attended a “Say Their Names” rally at the Capitol and were joined by the family of Breonna Taylor and represenatives for the Kentucky Alliance against Racial and Political Repression, in addition to other families who lost members to police actions.

“We must remember not only the names that are here, but the names we will never, ever know and will never be able to say," Bailey said during the rally. "People who were killed, and it was swept under the carpet."

Sheneen McClain did not speak, but Newman offered thanks to Taylor’s family and others who came all the way to Denver to support her.

"This is about a Mother who has lost her son, who has now taken on the amazing role of speaking as the voice of a community," she said at the Saturday rally.

On Sunday, there was a “Gathering in Gratitude” event at the Montbello Recreation Center, which Sheneen and dozens of others attended to remember Elijah, listen to music and show solidarity for the McClain family and others killed by police.

"I hope Sheneen McClain and so many others in the movement are embracing this love that this community has at this moment," said Dr. Apryl Alexander, a forensic psychologist and associate professor, who has been involved in the Black Lives Matter movement. "We can't even feel her pain at this time, but so many people here are trying to find accountability and justice for her son, and so many other sons of the mothers who are showing up here today."

As has been said on numerous occasions by those pushing hardest for further investigation into the McClain case over the past year, the speakers at Saturday’s rally said they would not rest until there is justice for McClain, Taylor, and other people of color who died at the hands of police.

“Just like COVID-19 has changed our lives, this fight will continue to change our lives,” said Stephany Rose Spaulding.