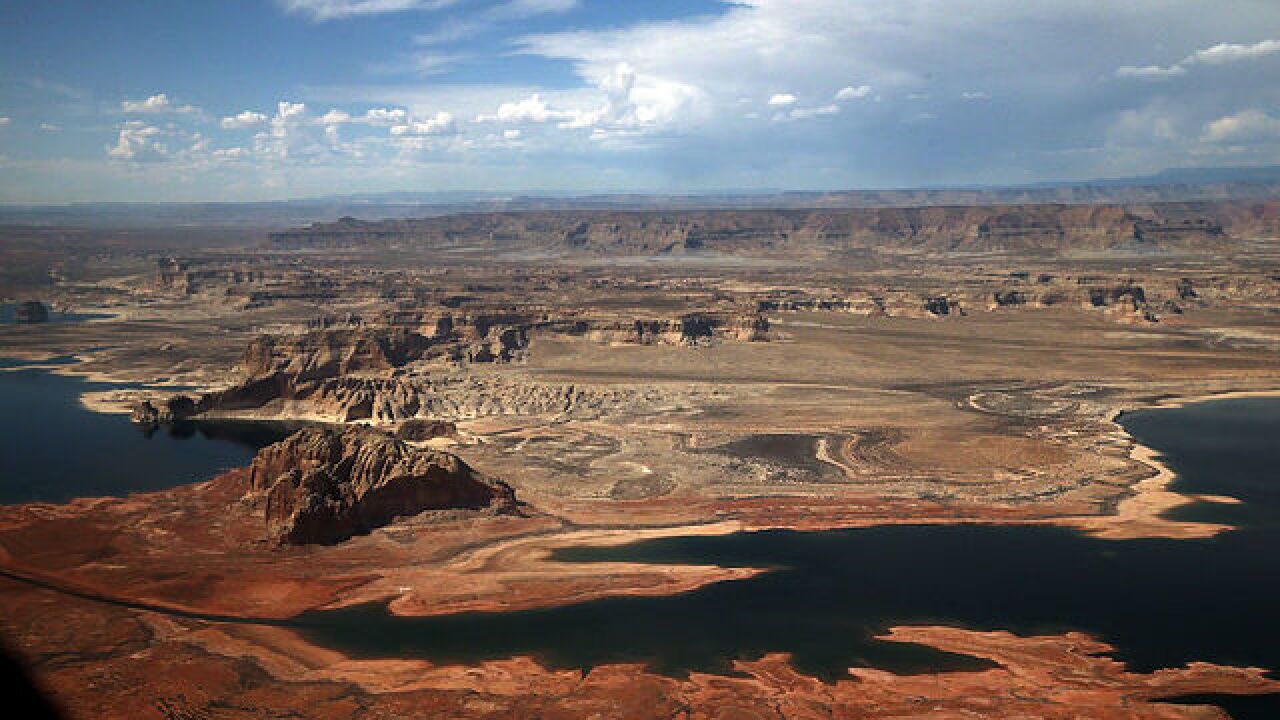 Copyright 2018 Scripps Media, Inc. All rights reserved. This material may not be published, broadcast, rewritten, or redistributed.
Justin Sullivan
<p>PAGE, AZ - MARCH 30: Lake Powell is shown from an airplane window on March 30, 2015 in Page, Arizona. As severe drought grips parts of the Western United States, a below average amount of water is expected to flow through the Colorado River Basin into two of its biggest reservoirs, Lake Powell and Lake Mead. Lake Powell is currently at 45 percent of capacity, a recent study predicts water elevation there to be above 3,575 by September. The Colorado River Basin supplies water to 40 million people in seven western states. (Photo by Justin Sullivan/Getty Images)</p>

"I want people to know that what's going on at Lake Mead is very, very closely tied to what's going on Lake Powell," Doug Kenney said, the group's chair and a professor at the University of Colorado. "We're draining Lake Powell to prop it up."

Lake Powell is about 48 percent full, and Lake Mead is about 38 percent full. By the end of the year, Powell's levels are projected to fall 94 feet (29 meters) below where the reservoir stood in 2000 when it was nearly full.

The Colorado River basin, which feeds the two reservoirs, has been drying out over the last two decades, scientists said. With the demands from farms and cities exceeding the available the water supply, the strains on the river and reservoirs are being compounded by growing population, drought and climate change.

The Colorado River and its tributaries support about 40 million people and more than 7,800 square miles (20,200 square kilometers) of farmland.

"Continuing this operational pattern will further drain Lake Powell and erode the benefits associated with its water storage," the researchers said their report. "If storage in Lake Powell cannot rebound in an era where the Upper Basin consumes less than two-thirds of its legal apportionment, then the crisis is already real."

The river management system allocates equal portions of the water between the four Upper Basin states and the Lower Basin states. A far lesser portion is allocated to Mexico where the river ends.

"Better options might be found by thinking outside of this familiar framework. Lakes Mead and Powell, after all, are essentially one giant reservoir," the group said. "Managing — and thinking — of these facilities as two distinct reservoirs, one for the benefit of the Upper Basin and one for the Lower, now seems outdated."

The scientists suggested it could be time to reform the management system.

Information from: The Arizona Republic,  http://www.azcentral.com