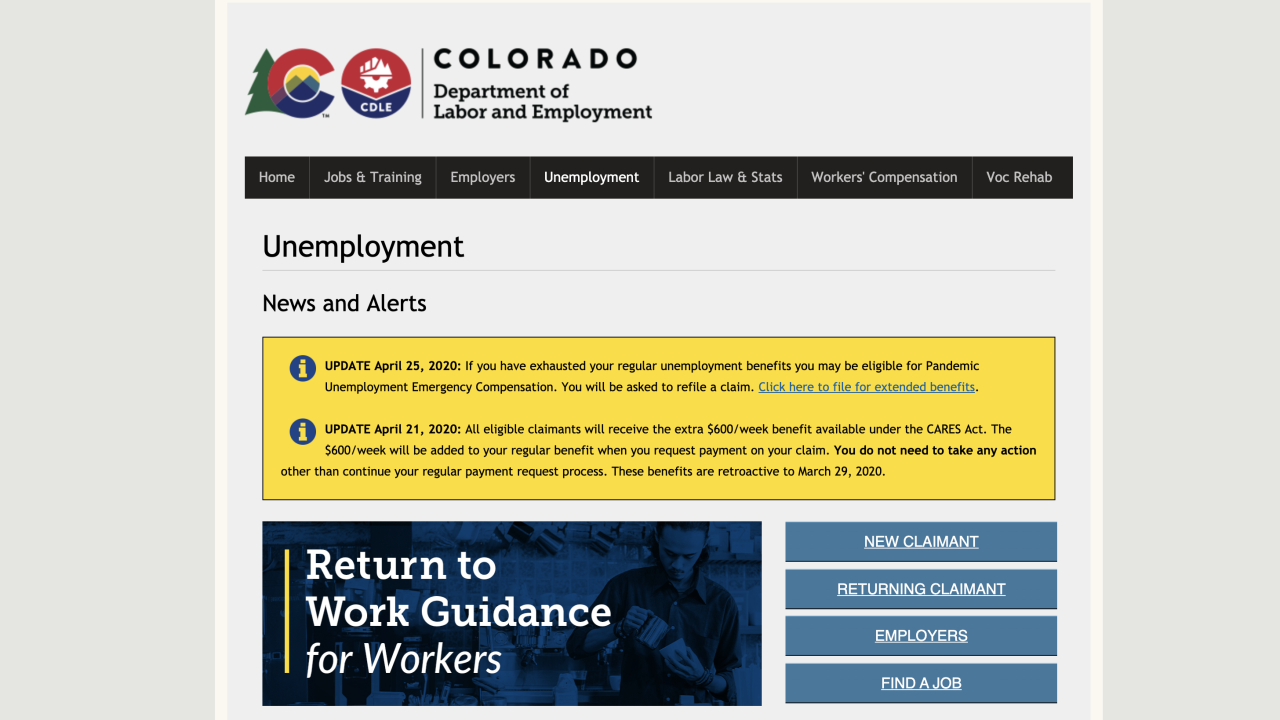 Copyright 2020 Scripps Media, Inc. All rights reserved. This material may not be published, broadcast, rewritten, or redistributed.
Denver7
The state’s computer system for unemployment filings last week potentially exposed the private data of some Coloradans who had filed for federal unemployment benefits. The Colorado Department of Labor and Employment said that the unauthorized access was fixed within an hour of it being identified on Saturday by a vendor the state is working with, Deloitte, on its computer system for Pandemic Unemployment Assistance (PUA) benefits. 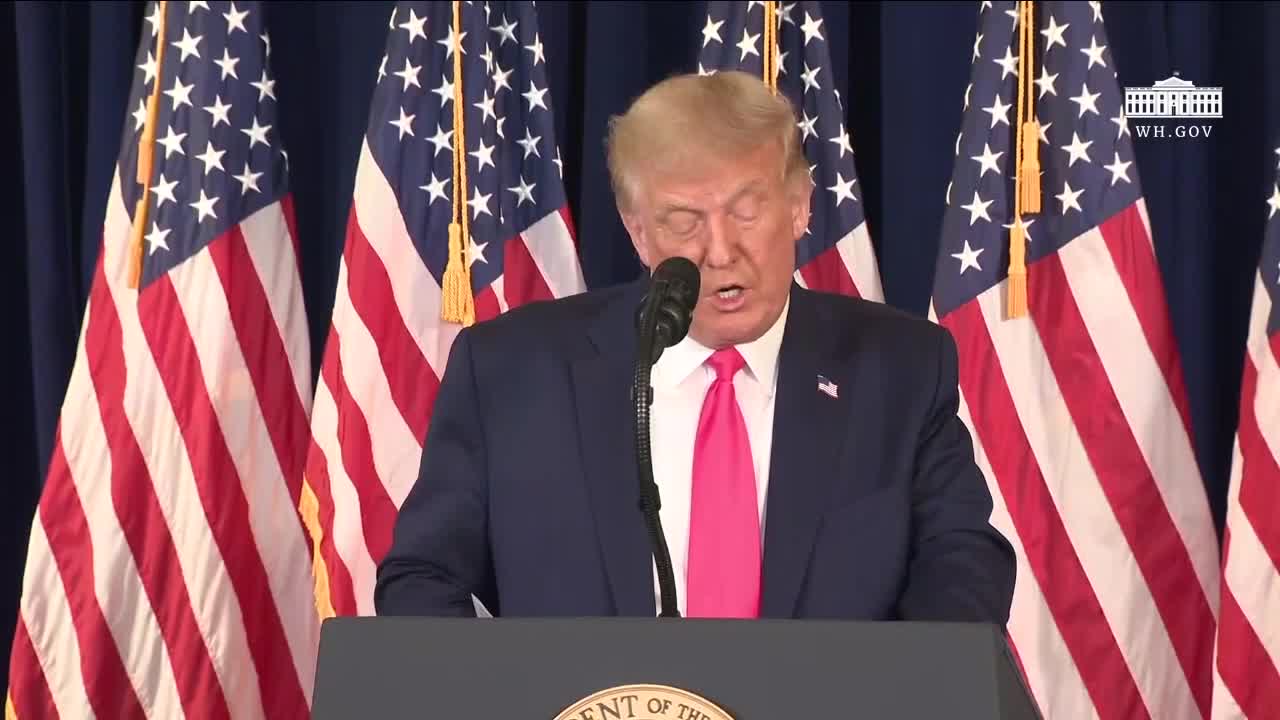 DENVER — In an effort to help those affected by the COVID-19 pandemic and end the gridlock in Washington, D.C. over the next round of stimulus spending, President Trump signed an executive order and three memorandums over the weekend.

What to the executive orders do?

The executive actions do four things. First, one provides a temporary tax holiday to Americans earning less than $100,000 per year. In a press conference Saturday, the president said if he wins reelection, he plans to forgive those taxes and make permanent cuts to the payroll tax, which funds Medicare and Social Security.

Second, the president directed the Secretary of Health and Human Services and the Director of CDC to look for ways to temporarily stop residential evictions of any tenants for failure to pay rent due to the pandemic.

He also directed his staff to look for federal funds to provide temporary financial assistance to renters and homeowners who, as a result of the financial hardships caused by COVID-19, are struggling to meet their monthly rental or mortgage obligations.

Third, the president extended the suspension of student loan payments and kept the interest rate at zero through the end of the year.

Fourth, the president cut unemployment benefits from including the $600 a week benefit, which expired late last month, to include instead a $400 weekly bonus check for some people who are receiving at least $100 a week in unemployment benefits, though states would have to pony up $100 of the match.

Where will the money come from?

Under the executive action, the federal government would only pay for 75% of the cost, with the rest calling for a match from each state.

“States will be asked to cover 25 percent of the cost using existing funding, such as the tens of billions of dollars available to them through the Coronavirus Relief Fund,” the president said during the press conference.

The Colorado Department of Labor and Employment said in a press call last Thursday that roughly 400,000 residents were receiving a $600 weekly check when the federal program ended the week of July 25. That money pumped about $150 million into the state’s economy each week.

Under the president’s new executive action, the state could be responsible for contributing approximately $30-$40 million in the extended unemployment benefits per week or $100 per person.

During a CDLE press briefing on Aug. 6, the department announced that it only has around $75-100 million left in its unemployment trust fund and is expected to run out of money later this month.

CDLE officials told CPR News Monday they were still awaiting guidance on how the plan will work, whether it can be implemented here, and whether Colorado would or could pay the match.

Colorado has requested a federal loan to help continue paying out unemployment benefits. However, that money will need to be paid back by the state and, in effect, employers.

“This, on the margin, either means more borrowing or higher premiums from employers because there’s not currently a mechanism to have the state General Fund and income taxes or sales taxes come in and pay these bills,” said Henry Sobanet, the former state budget director for Colorado and current Chief Financial Officer for the Colorado State University system.

Sobanet says there are still a lot of questions over whether these executive actions are legal and how they would work.

Among the questions are how the state would decide who pays what since Colorado has very specific formulas for the unemployment insurance premiums paid by employers.

“If they’re asking states to come up with the money, the source of the money is actually the employers of the state. So, while employers may need some help during the economic recession that we’re in, this would actually be an increase to them,” he said.

During the Saturday press conference, President Trump suggested that states use some of the CARES Act money they received to pay out these benefits.

However, Gov. Jared Polis already allocated out most of the money Colorado was given to things like schools and universities through an executive order of his own. State lawmakers allocated out the rest with legislation.

Sobanet says the governor could decide to amend his executive order to shift the funding toward these unemployment benefit checks.

“From CSU‘s point of view, that was a little over $90 million for our upcoming school year and the one that just ended. We would be in a world of hurt if we weren’t able to have that resource or if it was reallocated,” Sobanet said.

Groups that were allocated some of that federal CARES Act money have until December to spend it. The money that was already spent cannot be reallocated, but other funds can be redirected.

“Really, the state would not be able to do that for two to three weeks. Given budgetary restraints, even that is stretching our resources to the max,” he said.

He called for Congress to work together to come up with a deal for the next round of stimulus spending so that states aren’t pushed to the brink.

Colorado’s congressional delegation is also reacting to the executive actions.

In a statement, Sen. Cory Gardner’s spokesperson said he supports the president’s move to extend the unemployment assistance for Coloradans hurting because the pandemic, though the order came after weeks of inaction in the Senate and continued hand-wringing split between parties over another funding bill.

“It’s unfortunate that Senator Schumer rejected extending expanded unemployment benefits, but Senator Gardner will continue to fight for three priorities in a bipartisan, bicameral deal: Making sure that we’re stopping the spread and flattening the curve, helping Coloradans with the immediate relief that they need to get through this crisis, and getting businesses up and running again,” the statement read.

Sen. Michael Bennet, however, said that Republicans have chosen to play politics over the past two months rather than negotiate a relief package and he said the executive orders are not enough to help families.

“If we really want to support working families and our economy through this crisis, the next relief package must extend the expanded unemployment benefit and provide other support to struggling families; include enough funding to ensure federal, state, and local governments can maintain critical services; offer sustained support to the hardest-hit small businesses; and create a health force to support front line medical professionals. Instead of half measures and political stunts, we should immediately pass a relief package so we can get our country and our economy back on track,” the statement read.

Rep. Diana DeGette, meanwhile, questioned the constitutionality of the executive actions and said they will do little to help families and small businesses that are struggling.

“Instead of extending the full $600 a week in unemployment benefits that we authorized in the House, the president’s order takes funding away from Social Security and Medicare to give new tax breaks to those who are still employed. That’s ludicrous. And it’s why it is now more important than ever that we reach an agreement to provide families and small business owners the assistance they need during this difficult time,” the statement read.

On its website, CDLE acknowledged the executive orders but said it is waiting for federal guidance on how to move forward.