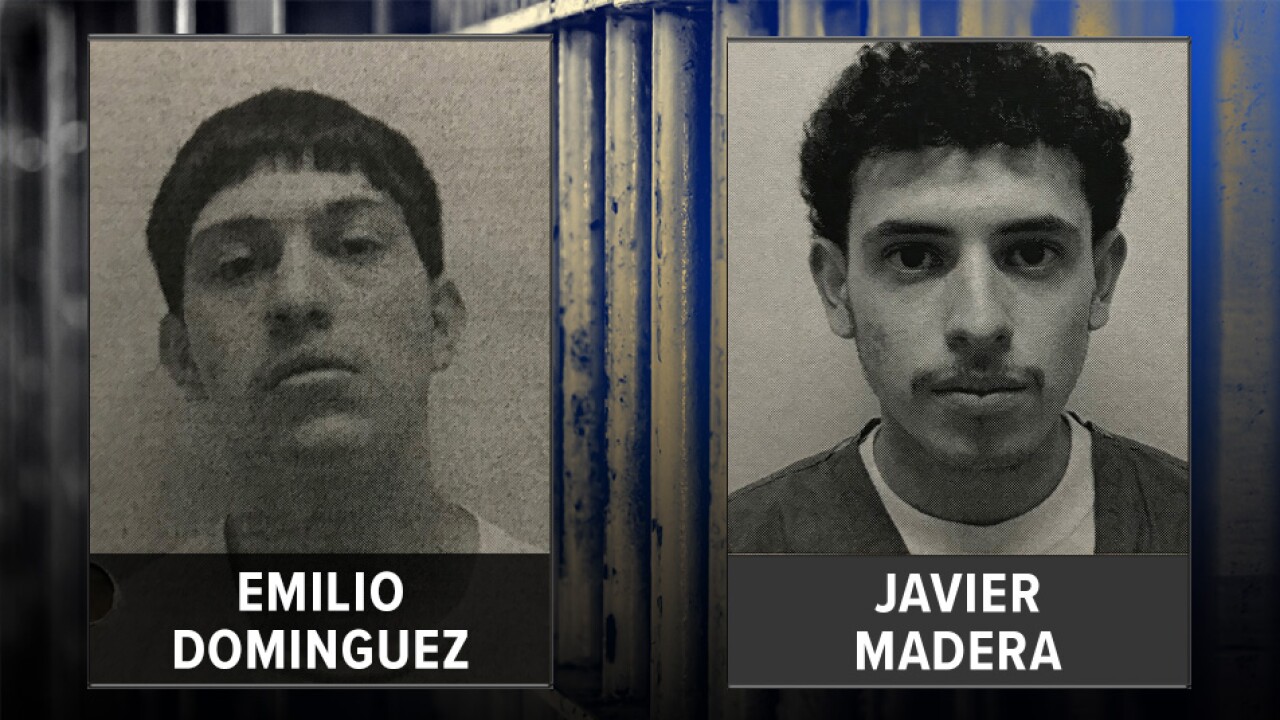 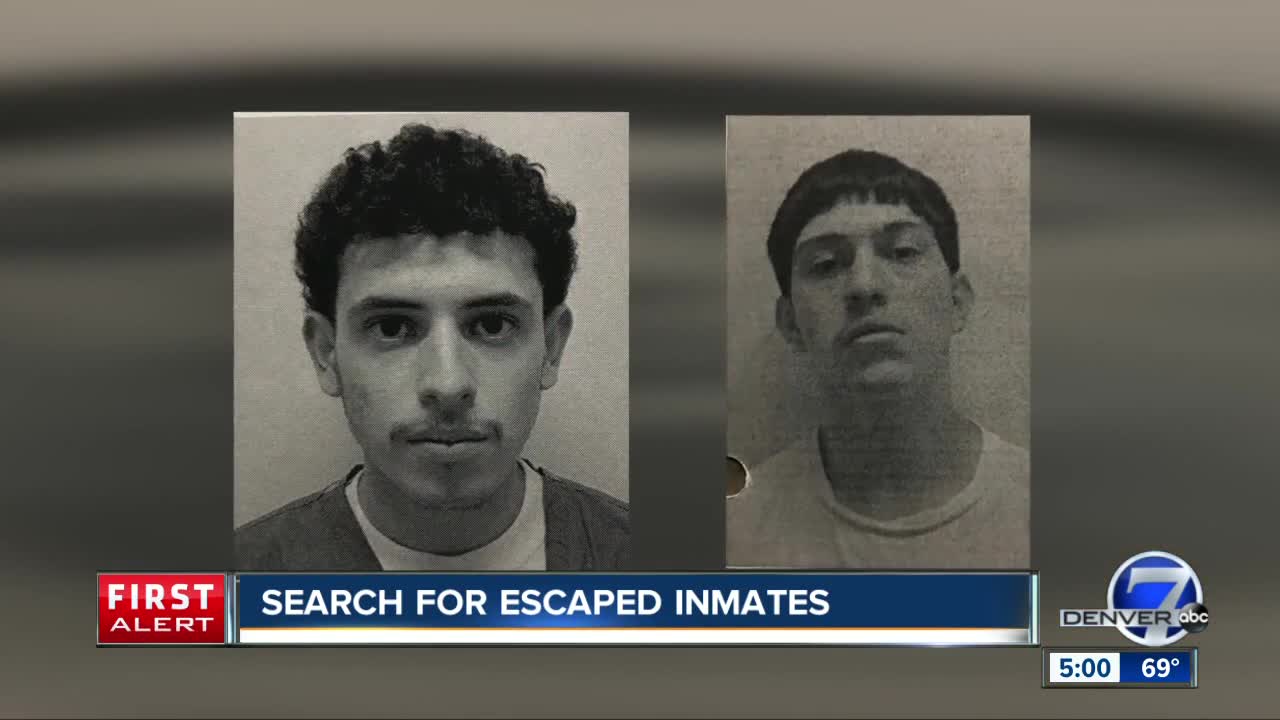 The Golden Police Department said they are searching for 19-year-old Javier Madera-Nunez and 17-year old Emilio Dominguez. They were roommates at the facility, which is an intensive and secure treatment program for 140 male juvenile offenders.

A guard at the facility last saw Madera-Nunez and Dominguez between midnight and 1 a.m., when he let the men go to the bathroom. The men were also accounted for during a headcount around 2:15 a.m.

A Golden police officer did not notice anything usual during a routine perimeter check at 2:21 a.m. But when the officer did another check at 5:20 a.m., they noticed a dumpster turned on its side and sheets hanging out of a window on the second floor of the building. A window was also broken.

The officer notified the facility about a potential escape and a K-9 was brought out to search the area. Police set up a perimeter and while the K-9 tracked the two escapees to a splash park about a mile away, it lost the scent after that. They may have had a car waiting for them, police said.

Golden police said they believe the escapees are "long gone from the Golden area." Because of that, police did not send a Code Red call to residents.

Both of the inmates are Hispanic, police said.

Madera-Nunez is 5 feet, 10 inches tall and weighs 147 pounds. He has brown hair and brown eyes, and a skull tattoo on his right forearm. He is a sex offender and has gang affiliations, police said. His last known address was in Commerce City. Court documents state that Madera-Nunez is originally from Mexico but do not say what his legal status is.

This was not the first time he tried to escape from detention: According to court documents, he was being housed at the Mount View Youth Services Center when he and another juvenile tried to escape on March 12, 2018. During that incident, the two had cleaned out the dayroom as part of their duties and were taking out the trash to the dumpster when they tried to escape.

The two started running toward the fence and threw a makeshift rope over it. That rope, like the Monday escape, was made from strips of bedsheets. The other juvenile, who was not named in court documents due to his age, managed to escape but Madera-Nunez was pulled down from the fence before he could make it over.

Madera-Nunez was charged with attempting to escape from a felony conviction, which is a Class four felony, and possession of contraband, which is a Class six felony. The attempt to escape charge was dismissed, but Madera-Nunez pleaded guilty to possession of contraband — the rope. He was sentenced to 90 additional days in detention and 90 additional days of probation to be served concurrently with the rest of his prior sentence.

Before the escape attempt, Madera-Nunez was supposed to be released from detention in August of 2020.

The other inmate who escaped Monday morning is Dominguez, who is described as is 5 feet, 9 inches tall and weighs 182 pounds. He has black hair and brown eyes. Police said he has the word “King” tattooed on his right hand. He has a tattoo of roses and his last name on his right arm. He is a violent sex offender with gang affiliations, police said, and was also charged with intimidating a witness. Both of his parents live in Denver.

If you see either of these young men, police ask that you call 911 and not approach them.

Golden police said they had extra patrols at schools Monday.

This escape is just the latest in a series of incidents at the facility in recent weeks.

On April 11, a 15-year-old escaped while being transported from the facility to the Department of Motor Vehicles to get some identification cards. He was caught a day later in Littleton.

"Obviously, the one that happened inside that facility is more of a concern for us because that's quite difficult and it takes a lot of preplanning to be able to get done," said Golden Deputy Chief Joe Harvey.

He said he estimates that there have been between six and seven escapes from the facility since 2010, not including people not returning from temporary releases.

"I think for the community, any escape would certainly be sensitive," Harvey said.

Later in April, Golden police ramped up their patrols around the facility after receiving word that there was another credible escape attempt in the works. The two individuals involved were relocated to another facility.

"The Department of Youth Services was paying for officers to do extra patrols, so they were paying our Golden officers off-duty to come in and patrol that area," Harvey said.

On May 1, a riot broke out at the facility, which injured 10 staff members and four inmates. This riot happened in the same lodge where the two escapees were being housed, but Golden police said they do not believe Dominguez or Madera-Nunez were involved in that incident.

"It looks bad because we've had three fairly significant events there," Harvey said. "I understand the looks, but what I would say is that not only youth services, but the Golden Police Department and Jefferson County, when called upon, are working hard to make sure that our community is safe."

The Colorado Department of Human Services, which runs the facility, said it has made changes in response to "recent incidents" at the facility and said it was continuing to "look at process and protocols."

CDHS said those changes included monitoring staffing levels, the addition of an associate director at the facility and a review of security protocols.

Golden police also confirmed they had investigated the facility after receiving reports that drugs and drug paraphernalia were being smuggled in. That investigation was inconclusive.

Last week, Golden police say they were made aware of the facility looking into three staff members smuggling drugs in, however that case has not been passed off to them at this point.

During a search of Madera-Nunez and Dominguez's cell, drug paraphernalia was found.

"We certainly have had our calls for service up there. It's nothing that I could sit here and say that I'm overly concerned about the facility itself," Harvey said.

In a press release, CDHS said it is fully cooperating with Golden police on the investigation. CDHS has made changes to its protocols after recent incidents, but is now conducting an internal review of the situation to see what other changes are needed.

The facility, which houses 140 males, was staffed properly during the escape.

The division's associate director of youth centers has now been stationed at the Lookout Mountain facility to oversee the center.

CDHS said it is reviewing the latest escape and looking to make larger, systematic improvements. It's also conducting an investigation and says it will act swiftly and appropriately. CDHS has its own fugitive team that searches for escapees, though they don't have arresting powers.