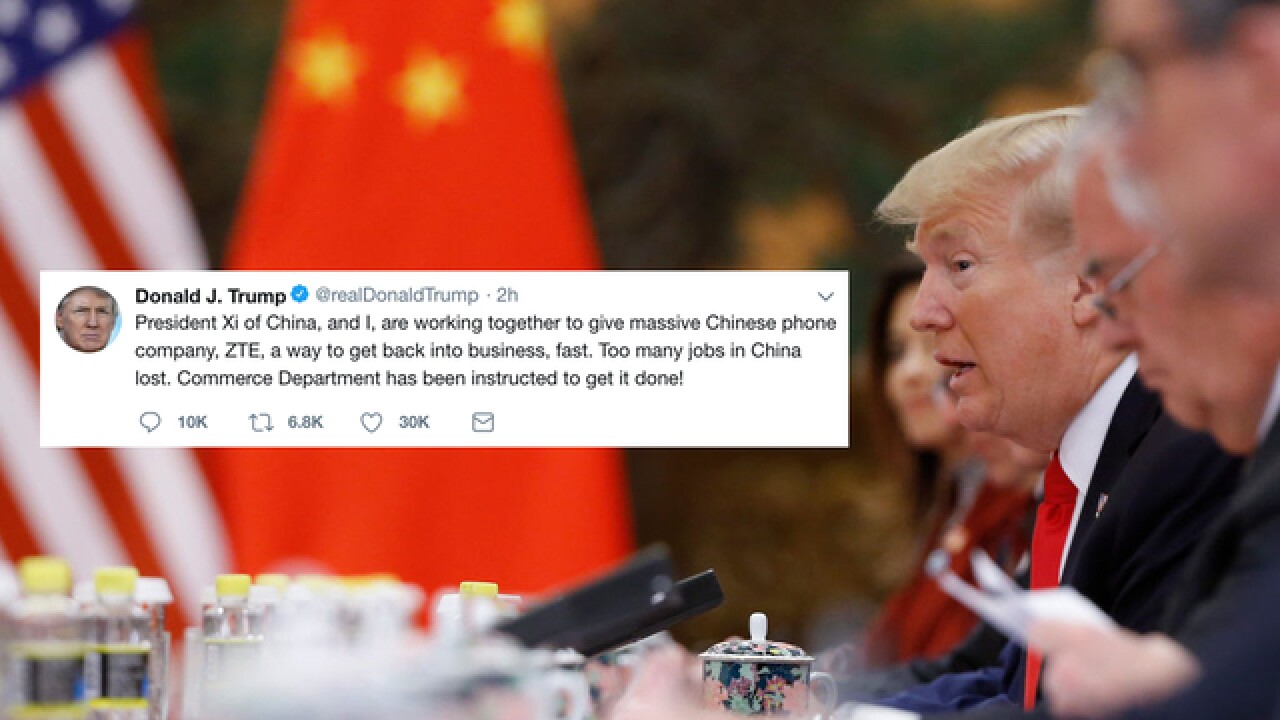 Getty Images // Twitter
<p>President Donald Trump said Sunday he has instructed his Commerce Department to help get a Chinese telecommunications company "back into business" after the U.S. government cut off access to its American suppliers.</p>

WASHINGTON (AP) — President Donald Trump said Sunday he has instructed his Commerce Department to help get a Chinese telecommunications company "back into business" after the U.S. government cut off access to its American suppliers.

At issue is that department's move last month to block the ZTE Corp., a major supplier of telecoms networks and smartphones based in southern China, from importing American components for seven years. The U.S. accused ZTE of misleading American regulators after it settled charges of violating sanctions against North Korea and Iran.

ZTE, which has more than 70,000 employees and has supplied networks or equipment to some of the world's biggest telecoms companies, said in early May that it had halted its main operations as a result of the department's "denial order."

Trump, who has taken a hard line on trade and technology issues with Beijing, tweeted on Sunday that he and Chinese leader Xi Jinping "are working together to give massive Chinese phone company, ZTE, a way to get back into business, fast. Too many jobs in China lost. Commerce Department has been instructed to get it done!"

ZTE has asked the department to suspend the seven-year ban on doing business with U.S. technology exporters. By cutting off access to U.S. suppliers of essential components such as microchips, the ban threatens ZTE's existence, the company has said.

During recent trade meetings in Beijing, Chinese officials said they raised their objections to ZTE's punishment with the American delegation, which they said agreed to report them to Trump.

The U.S. imposed the penalty after discovering that Shenzhen-based ZTE, which had paid a $1.2 billion fine in the case, had failed to discipline employees involved and paid them bonuses instead.