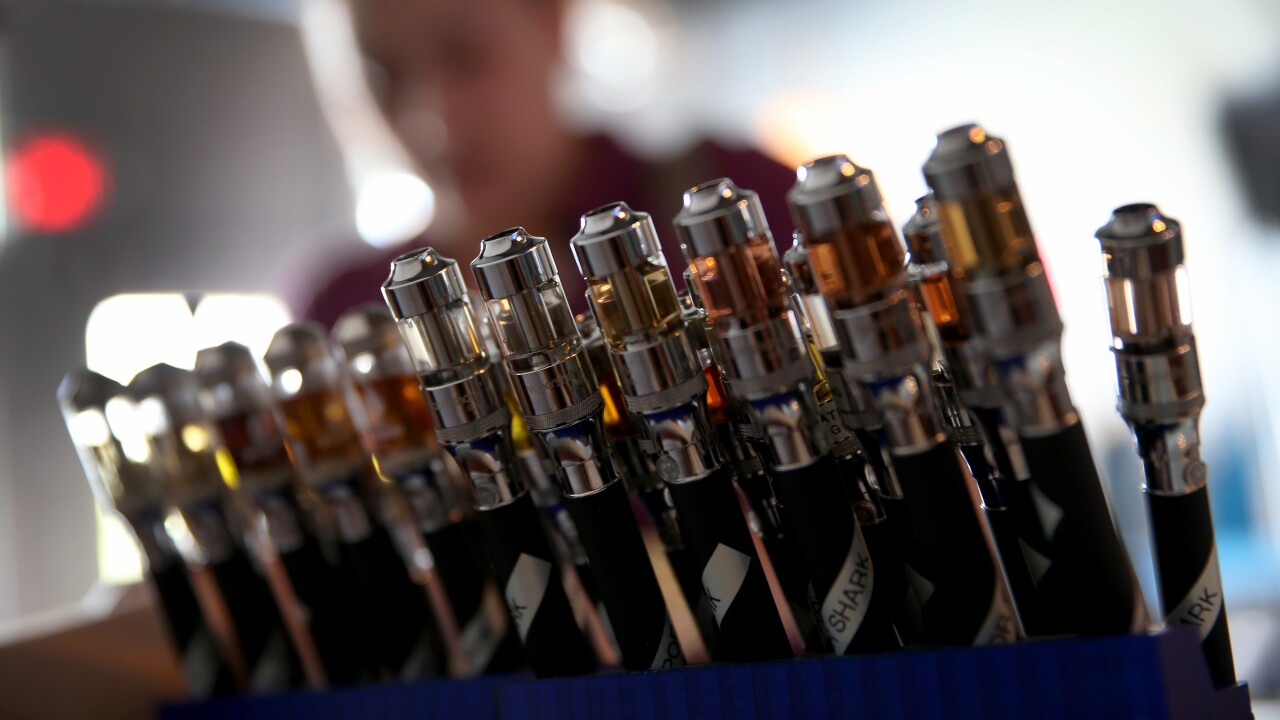 Joe Raedle/Getty Images
MIAMI, FL - FEBRUARY 20: Electronic cigarettes with different flavored E liquid are seen on display at the Vapor Shark store on February 20, 2014 in Miami, Florida. As the popularity of E- cigarettes continue to grow, leading U.S. tobacco companies such as Altria Group Inc. the maker of Marlboro cigarettes are annoucing plans to launch their own e-cigarettes as they start to pose a small but growing competitive threat to traditional smokes. (Photo by Joe Raedle/Getty Images)

DENVER – President Donald Trump said Wednesday his administration is looking into banning flavored vaping products nationwide, drawing rare praise from Rep. Diana DeGette, D-Colo., who is sponsoring a bill that aims to do just that and who will lead a congressional hearing later this month on the spate of vaping-related illnesses happening across the country.

"It'll take several weeks for us to put out the final guidance that will announce all the parameters around the enforcement policy, and then there will likely be about a 30-day delay to effective date, as is customary," Health and Human Services Secretary Alex Azar said. But "at that point all flavored e-cigarettes other than tobacco flavor would have to be removed from the market."

The announcement comes as the CDC, FDA and state health officials around the country work to investigate the cause of an outbreak of lung illnesses linked to vaping. The last updated numbers showed there are more than 450 possible cases nationwide, including six deaths, and four confirmed or suspected cases in Colorado.

Dr. Tony Cappello, the director of the Colorado Department of Public Health and Environment’s Disease Control, told Denver7 last week that Colorado and federal officials were treating preliminary findings in New York about vitamin E acetate possibly being responsible for the illnesses as a lead but not a definite answer.

Just two weeks ago, the Colorado Department of Health confirmed the second of Colorado’s confirmed cases in a news conference alongside DeGette and a Children’s Hospital Colorado doctor. They warned of the dangers of vaping for people of any age, but particularly children.

And DeGette pushed two of her bills related to vaping -– the Stopping Appealing Flavors in E-Cigarettes for Kids Act (SAFE Kids Act), which would impose new restrictions on tobacco flavors in e-cigarettes, and the Tobacco to 21 Act , which would prohibit the sale of tobacco products to people under 21 years old.

As of Wednesday, her SAFE Kids Act had only two cosponsors, and it now appears that the administration will enact new rules without needing congressional approval. The FDA has been able to ban vape flavors since 2016 but has said it wanted to study if they helped smokers quit.

DeGette said in a tweet she was pleased with the move by the administration.

“I don’t often agree with the Trump admin, but on this I do. These flavored nicotine products are causing real harm to the health of our children,” she said. “That’s why I filed legislation months ago to ban them in the U.S. We have to do more to protect our kids.”

I don't often agree with the Trump admin, but on this I do. These flavored nicotine products are causing real harm to the health of our children. That's why I filed legislation months ago to ban them in the U.S. We have to do more to protect our kids. https://t.co/swQKt3iLkg

On Sept. 25, DeGette will chair a House Energy and Commerce Committee’s Oversight and Investigations panel hearing on the vaping lung illnesses as the panel’s investigation and investigations by CDC and FDA continue.

“No one who uses these products knows what they are inhaling into their bodies, or how it might affect their health,” DeGette said in a statement. “We can, and must, do more to protect the health of the American people. Our committee is determined to find out exactly what is causing these life-threatening illnesses and what needs to be done to prevent them.”

Colorado has the highest teen vaping rates in the nation. At the news conference in late August, Dr. Robin Deterding at Children’s Hospital Colorado said that vaping was like inhaling a “chemistry experiment” and was adamant that children not vape.

The health officials have asked anyone who has had a lung illness since June 1 to contact their doctor as the medical and health communities try and identify more cases and the root causes. Typical symptoms include coughing, shortness of breath, chest pain, nausea, vomiting, fatigue, fever, weight loss and more.

Information from CNN contributed to this report.