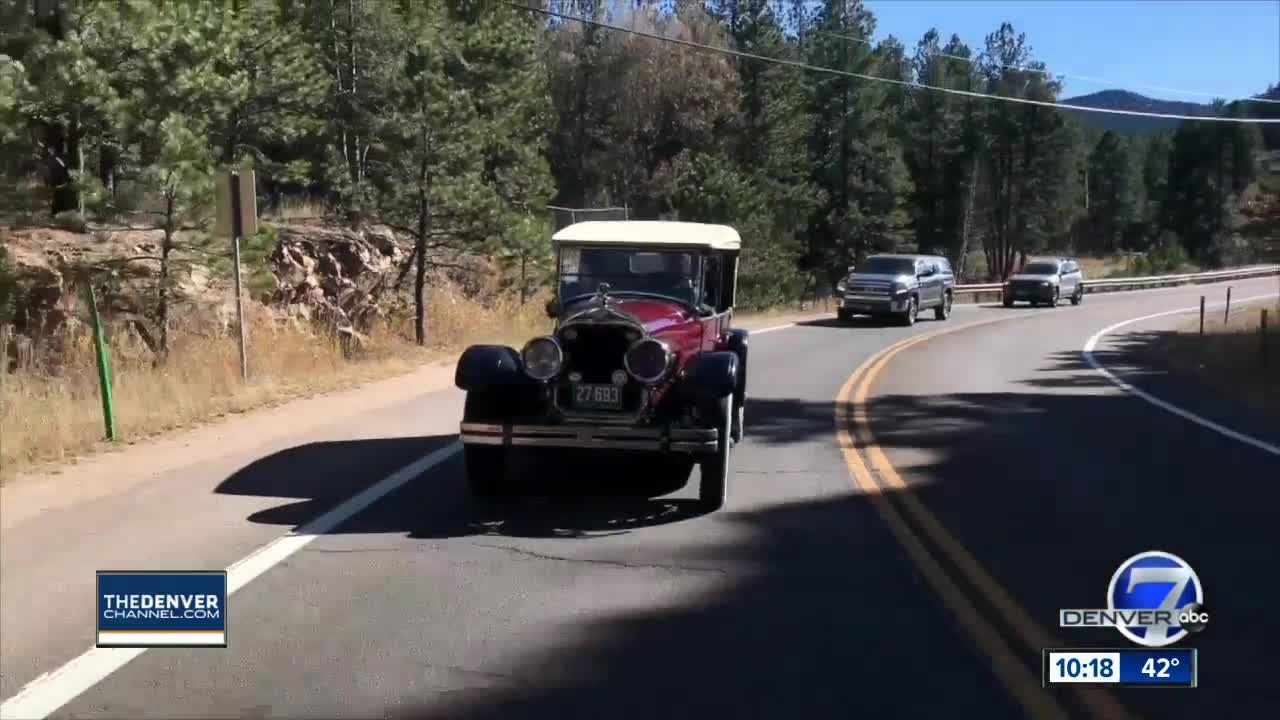 MORRISON, Colo. — Americans love cars. We love them so much that, on average, we purchase a new vehicle every three years. But that has not been the philosophy for one Morrison family.

The Sims family has a car that has been in the family since the 1920s. The 1926 Flint touring model E-55 is now is rolling through the 5th generation of Sims'.

"My grandfather, Albert C. Sims, bought it new from a Flint dealer down on 12th and Broadway," Frank Sims recalls.

Frank Sims just turned 90 this year. One of his favorite pictures of the old Flint shows him standing on the running board flanked by his grandfather to the left and his father to the right. Frank was just 2 years old when the Flint was brand new.

When Albert Sims bought that car in 1926, Congress approved funding to start building Interstate 70 through Denver. Interstate 25 didn't exist. The quickest way to move south from Denver was to take Broadway.

That Flint showroom at 12th and Broadway is now a US Bank branch. But back in 1926, it sold some of the most expensive cars in the country. The Sim's Flint sedan cost a whopping $1,100, about $16,000 in today's dollars. That was nearly double the price of a typical family car at the time.

Frank's grandfather decided to spend a bit more because he had just signed a contract with the federal government to begin delivering the mail between Morrison and Evergreen. He needed a car big enough to handle the load and to make the trip every day for years.

After a few years, Albert opted for a newer car. Frank's father had no use for a 3-year old, high mileage Flint, so it was used to earn extra cash as a taxi to and from the local stables in Morrison. During the school year, it got the kids to and from classes at Golden High School.

In the early 1940s, the war effort prevented the family from buying gas or tires for the car, so they let an uncle in Flagstaff, Arizona take it. That uncle used a can of paint to create a mobile billboard out of the car to promote his local drug store.

As 1960 approached, the old work-horse was back in Morrison. The family stuck the old Flint behind the garage, where a dozen harsh winters turned it to nothing but rotting wood and rusting metal.

"It was buried in trash in the garage," Frank remembers. "So, it took me quite a while to uncover it and get it out. I decided to restore it."

The year was 1975, and the decision to restore a 50-year old car became Frank's passion project. For 6-long years, Frank scraped up whatever money he could for that on-again, off-again effort. No one made parts for the old jalopy.

"If you didn't have a part or couldn't find it, you had to have it made," Frank said.

Frank said he left the sheet metal work and the engine rebuilding to the professionals. He spent his time grinding and sanding away, hoping to save a dollar or two here and there.

By 1981, Denver's 16th Street Mall was preparing to roll out the red carpet. At the same time, Frank Sims was rolling through town in his grandfather's 1926 Flint. It was restored with such accuracy and precision, it collected dozens of top awards at car shows from Michigan to New Mexico. It's still a regular at the Golden Car Show every summer.

"Well, you get to meet people, talk to them and find out about them and explain about your car," Frank said of his dozens of car show outings. "It's a real conversation piece."

"At my age, money isn't everything," he said.

But family is. Asked how long Frank now wants to keep this 1926 Flint in the family, he's pretty clear he doesn't want them selling it either.

The Sims' Flint has seen more than most of us when it comes to the evolution of Denver. And for the last 90-years, Frank has witnessed much of it in the front seat of a classic.

He said he doesn't get around much anymore. That's an interesting sentiment from the guy who made sure the body of his 1926 Flint touring model E-55 remained a sparkling piece of Denver history for the rest of us to enjoy.