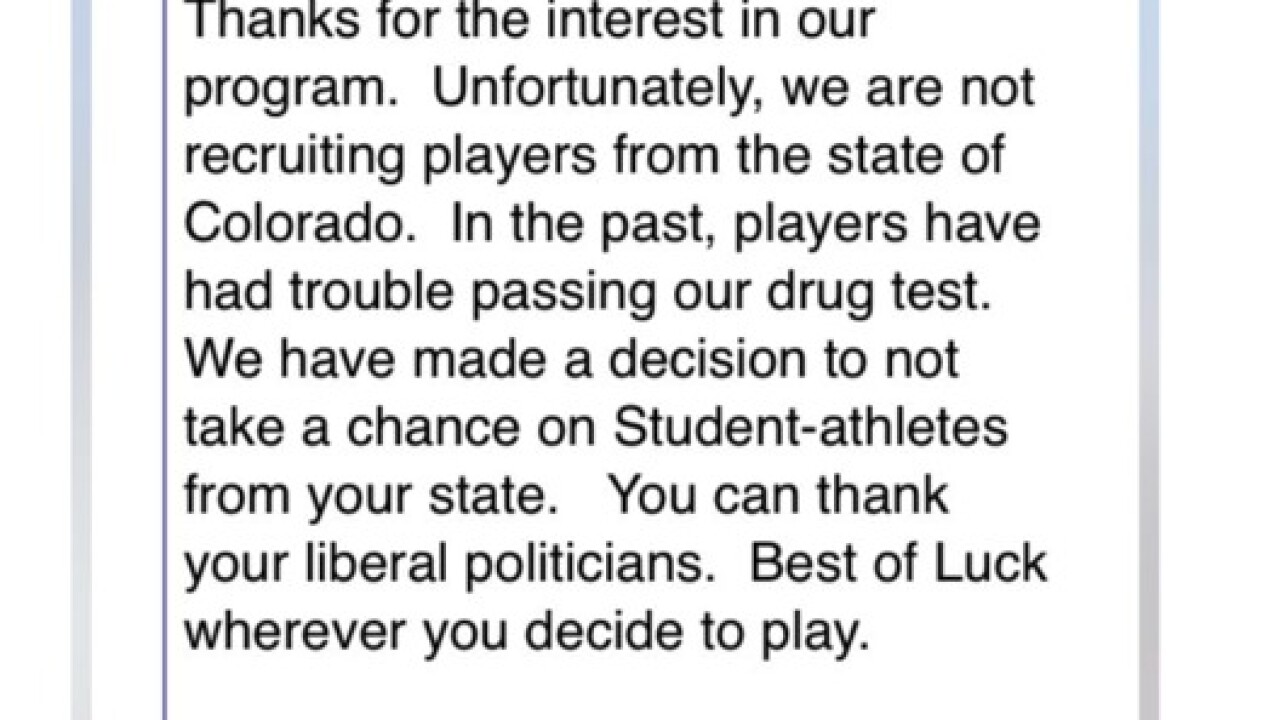 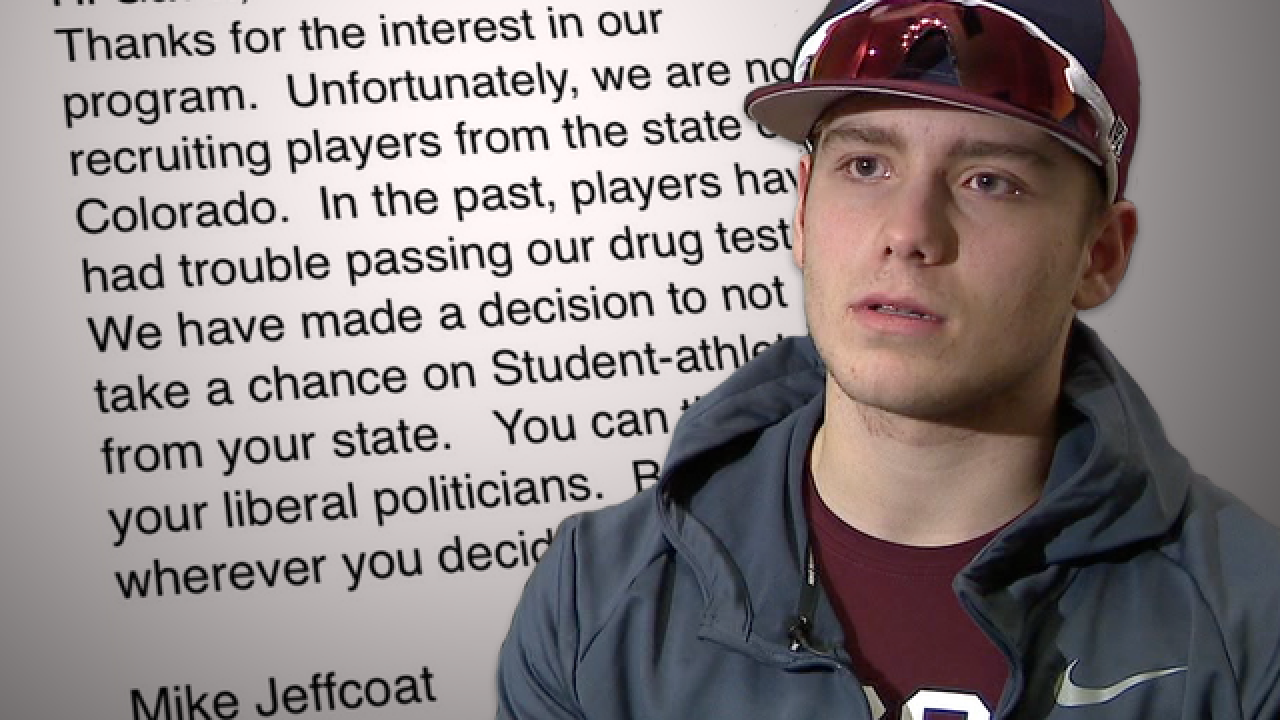 DENVER —An Aurora high school athlete was turned away from a Texas university recently after the school’s head baseball coach told him the school no longer recruits Colorado athletes because of past issues with drug testing.

Gavin Bell, a senior at Cherokee Trail High School, expressed interest in attending Texas Wesleyan University in the Dallas-Fort Worth area and joining the school's baseball program, but was rejected in an email sent to the student by Head Baseball Coach Mike Jeffcoat.

Jeffcoat writes, “Thanks for the interest in our program. Unfortunately, we are not recruiting players from the state of Colorado. In the past, players have had trouble passing our drug test. We have made a decision to not take a chance on Student-athletes from your state. You can thank your liberal politicians. Best of Luck wherever you decide to play.”

Although not explicitly mentioned in the email, Jeffcoat is likely referring to Colorado's recreational marijuana laws.

"I’m just a high school student looking to play baseball somewhere," said Bell, who never wanted to be at the center of a controversy. "I'm a good student athlete. I am just sad he couldn't take a chance on me."

While Bell tried to brush off the email, his former coach, Allan Dyer, said he went public with the discriminatory comments after he complained to the University and did not receive a response.

"To hold the political ideals of a state against an 18-year-old kid who has nothing to do with that — I was shocked. How do you do that?" asked Dyer, who described Bell as a leader on the field and in the school. "That's what is ironic. Gavin is a great kid."

Dyer said in his 30 years of coaching, he has never seen an email like the one sent to Bell and he called it "unacceptable," especially coming from Jeffcoat, a former Major League player and leader in the world of college baseball.

A University spokesman told Denver7 it is aware of the email and is investigating the matter. John Veilleux, a spokesperson for Texas Wesleyan University, said the letter in no way reflects TWU, its values or recruiting practices.

Veilleux declined to say if previous or current Colorado athletes had trouble passing drug tests. The school's baseball program currently has at least one member from Colorado on its roster.

The school released the following statement:

We are aware of the email sent by our baseball coach, and the comments he made are in no way a reflection of Texas Wesleyan University, its values or its recruiting practices.

This is a personnel matter and it is currently under investigation. It is our University policy to not discuss personnel matters, but we want to reiterate that this email does not reflect our values and we do not condone discrimination. This includes discrimination on the basis of race, color, origin, ethnicity, gender, age, religion, disability or sexuality; or the political legislation of one’s home state. We are committed to providing an inclusive campus for all of our students, faculty, staff, visitors, potential students and their families.

Texas Wesleyan has a long tradition of excellence in athletics and we are committed to recruiting student-athletes who will excel at our university. Like the NAIA’s core values, we are focused on building and recruiting champions of character.

Bell said he is originally from Texas and lived there until he was 12, which is why he was interested in Texas Wesleyan.

Now, he is concerned the controversy could impact his chances of getting recruited.

"[I'm worried about] other coaches not taking a chance on me because of what happened here. They’re going to look at this and think it’s just trouble," said Bell. "This isn’t about me getting back at anybody or anyone else. It’s just me wanting to play baseball at the next level."