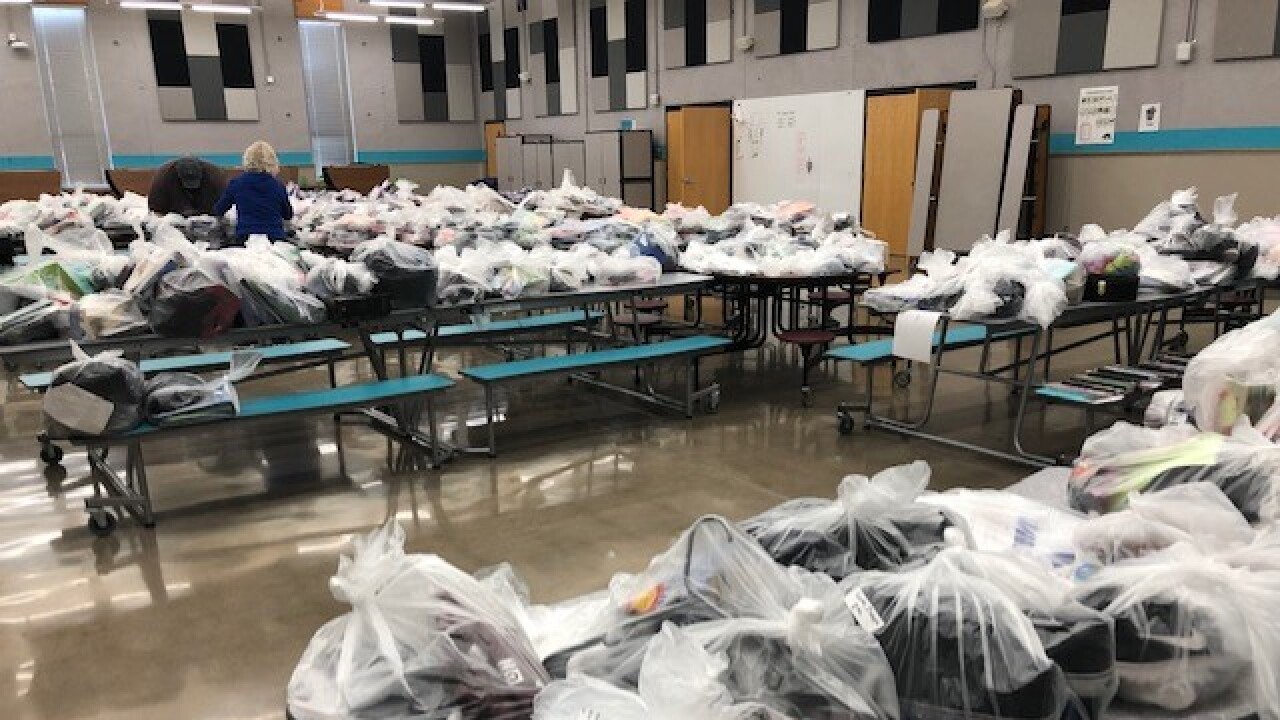 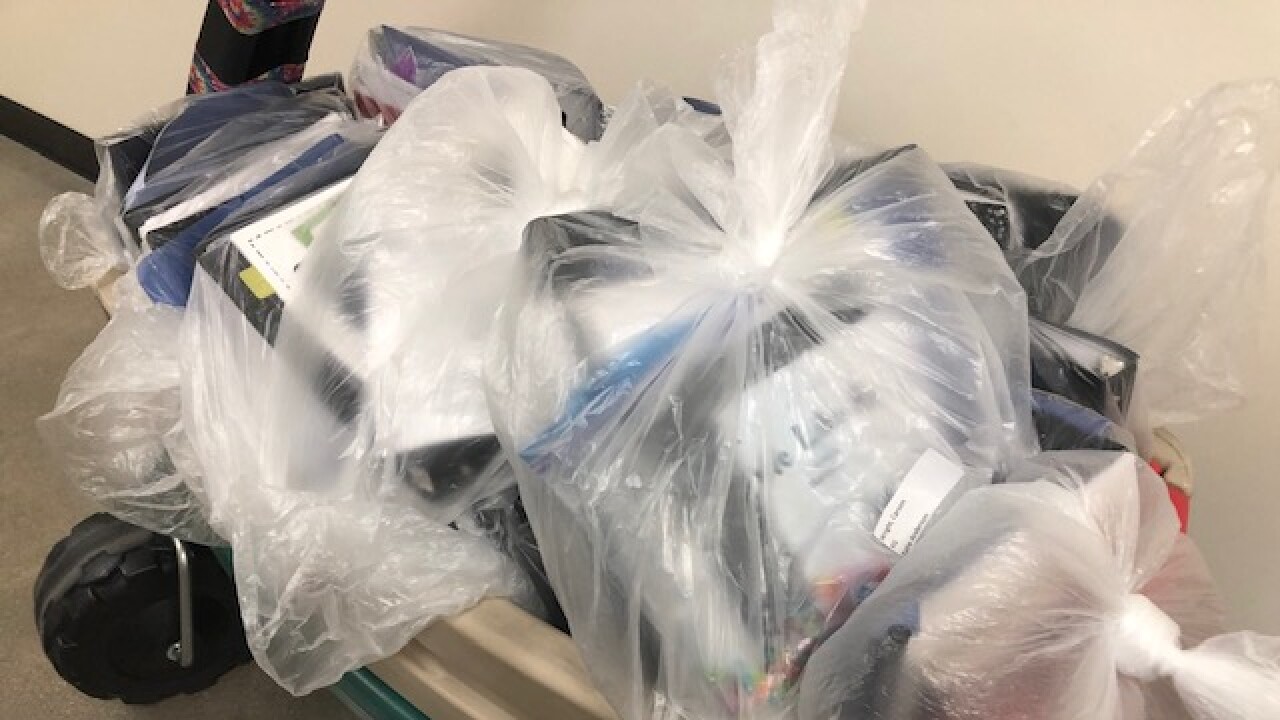 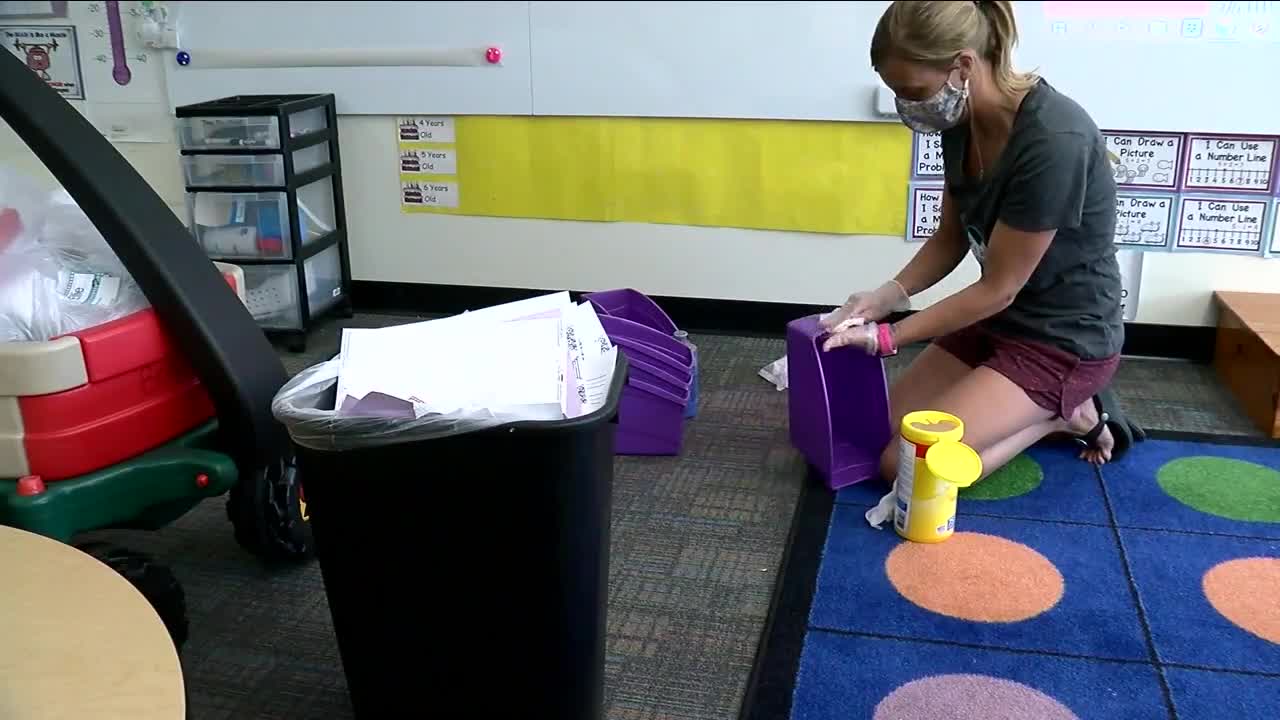 NORTHGLENN, Colo. — When Denver metro area students went on spring break, they had no idea they wouldn't be coming back to class because of the pandemic.

They had to finish the semester online. And two months later, students are wondering when they'll be able to retrieve items they left behind.

At the Stem Lab in Northglenn, part of the Adams 12 Five Star School District, teachers and staff have been summoned back to school to begin the emotional task of bagging students belongings — notebooks, pens and pencils, artwork, jackets, water bottles and other assorted items.

They donned facemasks, had their temperatures checked, and were told to stay in their rooms while bagging the belongings.

Stem Lab Principal Tracy Tellinger said what makes it extra hard is they don't get to tell their little charges goodbye.

"Touching the students items, there’s a lot of sadness with that as they hold each notebook, pictures of the students, or artwork that they’ve made," she said.

Tellinger said that she and her staff were initially looking forward to being together in their building again, "but when we came in, it felt more like a ghost town to me. It was really unsettling and unnerving. We really missed the students and the sense of community that we had."

Teacher Jina Bradford said she was touched by a comment from a kindergartner, who told her he missed being in the classroom, and asked why she couldn't come over to his house to teach him.

The teachers put their emotions on hold, as they bagged and tagged items, loaded them up on wagons, and waited for other staff members to take them to the cafeteria, where they are being alphabetized by grade.

Stacy Gahagen, the director of safety services at Adams 12 Five Star Schools, said the focus of this whole process is safety.

"When teachers come into the building, they must wear a mask," she said. "We have a station set up at the front foyer, where everybody has to go through a medical screening and a temperature check."

Gahagen said students and parents can pick up their belongings next Thursday and Friday.

"Students will come with parents in a drive-thru scenario," she said. "We'll have people here that will pick up the items and take them out to the curb."

Gahagen said they'll minimize reaching into the car, and minimize touching anything.

"We won't have anybody sign anything," she said. "We’re really trying to eliminate any touch points, as much as possible."

Other school districts are doing the same thing.

"We’ve been getting messages from families wanting to know when they can come get their stuff," said Will Jones at Denver Public Schools.

He said teachers and staff at McAuliffe International are bagging items left behind in lockers.

"One of the challenges with this entire scenario is that the Denver Department of Public Health made it abundantly clear, in no uncertain terms, we could not allow any of our students back inside our buildings," Jones said.

He added that the items at McAuliffe will be handed out curbside next week.

In Jefferson County, school officials are handing out diplomas, caps and gowns to seniors, and are receiving text books in return, from students who no longer need them.

"Stay in the car, we have signs, just head to one of those (people) right there in the chair and they'll help you out," one teacher told an arriving member of the senior class. "You look great. Congratulations honey, see you!"

"We have their caps and gowns, their diplomas, their letters, all the things we have for them inside bundled up for them," she said. "We have a system in place that gets it out to the kids. Lots of great volunteers."

Jeffco's COVID resource nurse, Laura Graser, said they're making sure that everyone upholds social distancing, and that everyone is taking precautions such as wearing masks.

Jeffco Public Schools' Executive Director of Media Relations and Public Information Cameron Bell said the larger schools will be given more time to return the items students left behind.