Support falls by 20% in poll when tax question asked 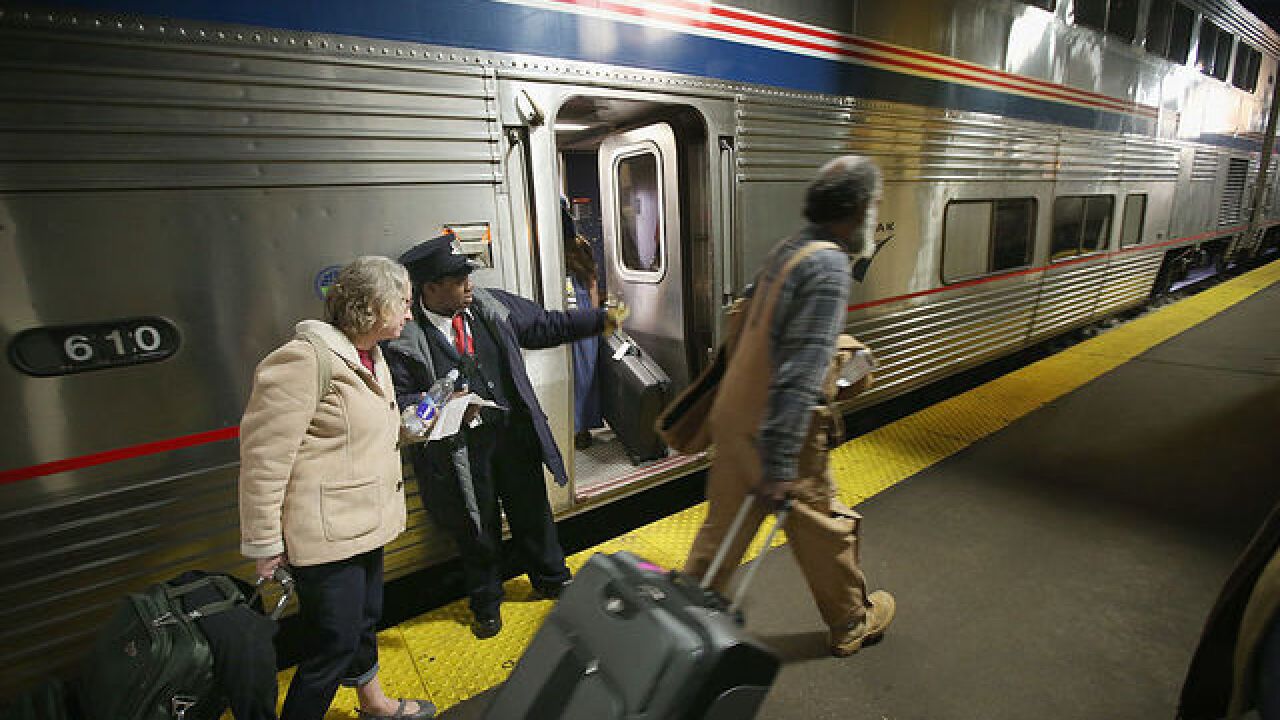 2013 Getty Images
Scott Olson
<p>CHICAGO, IL - APRIL 09: Conductor Resha Taylor directs passengers boarding Amtrak's Southwest Chief in Union Station on April 9, 2013 in Chicago, Illinois. Amtrak set a record in March for the single best month ever in the company?s history. With ridership up in 26 of its 45 routes, Amtrak is on track to end the fiscal year at or above last year?s record of 31.2 million passengers. (Photo by Scott Olson/Getty Images)</p>

DENVER – There is wide general support for a possible Front Range passenger rail line that has been under discussion for several years, according to a new poll and state survey results, but paying for such an undertaking could scare off some of those supporters should it mean another tax hike.

At last Friday’s Southwest Chief and Front Range Passenger Rail Commission meeting, the commissioners were presented both with the results of a Front Range Passenger Rail Survey that was commissioned earlier this year and with the results of a poll done by Magellan Strategies and RBI Strategies and Research earlier this month – both of which asked questions about the possible rail line.

The commission ordered the report earlier this year to study possible routes, costs and other factors for a possible Front Range rail line as it looked into creating a new Front Range tax district to which a ballot question on creating the new rail line could be referred by the legislature – likely in either 2020 or 2021. Gov. Jared Polis said during last year's campaign that he supported a high-speed passenger rail between Fort Collins and Pueblo and his office said this week that was still the case.

Commissioners have been studying ways to try to relieve congestion along the Front Range, which is expected to grow by hundreds of thousands of people in coming decades, according to commission documents, for years. The rail line proposal is one of many that have been floated.

The survey was online for 71 days late this summer and garnered nearly 7,000 total responses. The questions on the survey were created by the Colorado Department of Transportation and reviewed by the commission before it went live.

According to the 2019 final results report, 95% of respondents said they believed a passenger rail line could help address transportation needs. The top reasons people said they supported the idea generally were for tourism and recreation purposes and for personal shopping and family visits, according to the survey.

Improving air quality was the top benefit respondents saw in creating a Front Range passenger line, which was followed by seeing more reliable travel times and having more travel choices.

Ninety-three percent of respondents said they supported the rail line stretching from “at least” Fort Collins to Pueblo, and 92% said they would be interested in using the service if one was available.

Just 43% of respondents to the rail survey said they currently used public transit along the Front Range. About 53% of respondents lived in households that make between $50,000 and $150,000 per year.

The top proposed stops include: Fort Collins, Loveland, Longmont, Lafayette/Broomfield, Thornton, downtown Denver, Denver International Airport, Denver Tech Center, Centennial, Castle Rock, Colorado Springs, Pueblo and Trinidad. But some respondents said they would like to see the line stretch down to New Mexico, up to Wyoming, and even as far away as Dallas and Kansas City.

Fort Collins residents were the most-responsive to the survey, with four zip codes in that area accounting for the top number of responses. The area that saw the fifth-most responses was in Colorado Springs.

A little more than half of the respondents to the survey provided their email addresses and indicated they were interested in staying updated and engaged regarding the project.

After the commissioners saw the results of the Front Range Passenger Rail Survey last Friday, they were shown results of the Magellan-RBI poll, which was first reported by the Colorado Sun and which was conducted Oct. 4-8 in 13 Front Range counties: Larimer, Weld, Boulder, Broomfield, Jefferson, Denver, Adams, Arapahoe, Douglas, El Paso, Pueblo, Huerfano and Las Animas.

The pollsters surveyed 600 likely general election voters within the 13 counties via the phone and internet, which was weighted to past turnouts in Colorado presidential general election years. The margin of error was ±4%. Just 30% of respondents said they currently used public transit.

The poll did not ask specifically about voting for or against a possible ballot measure, nor did it include any direct language that could go on a ballot.

“The scope of this research project was limited to only measuring general concepts and opinions of passenger rail services among Colorado residents on the Front Range,” the pollsters wrote in their analysis.

The polling showed similar enthusiasm – generally – for such a Front Range passenger rail service. But once a question of costs was added to the series of questions, that enthusiasm fell. In 2018, Colorado voters rejected two proposals to raise extra transportation money for the state -- one of which involved raising the state sales and use tax rates.

When those surveyed were asked if they “generally” supported or opposed the future use of a passenger rail service as a mode of transportation, 85% said they supported one, compared to 10% who were opposed and 5% who were unsure. Fifty-eight percent of respondents said they “strongly supported” the idea.

Similarly, when the question was narrowed down to having Front Range passenger rail service from Fort Collins to Pueblo, 81% said they supported the idea, compared to 12% who opposed it and 7% who said they were unsure or had no opinion.

But when a tax increase came into the mix, respondents were much more hesitant. The pollsters used a figure of $5 billion in estimated costs for the line from Fort Collins to Pueblo.

Respondents were asked if they would support or oppose a sales tax increase to fund the estimated $5 billion project.

The commission is expected to meet later this month with federal transportation, rail and highway officials regarding the Front Range Passenger Rail Project, and the commission will meet again in Denver on Nov. 8, then again on Dec. 13 at a location on the southern Front Range that has yet to be determined, according to meeting notes.

Conor Cahill, a spokesman for Polis, said Tuesday that the governor supported the idea of a passenger rail but had not seen any prospective ballot language.

"The Governor ran on and supports Front Range Passenger Rail. We can't comment on ballot language we have not seen. However, it's past time to better plan for growth, reduce traffic, and move Colorado's transportation system into the twenty-first century," Cahill said. "Now is the time to create a real plan and feasibility study to prepare a proposal for a vote in 2020, 2021 or 2022. Front Range Passenger Rail and Southwest Chief could support Colorado's future growth, our economy and benefit the people of our state with inexpensive, sustainable, reliable travel choices."