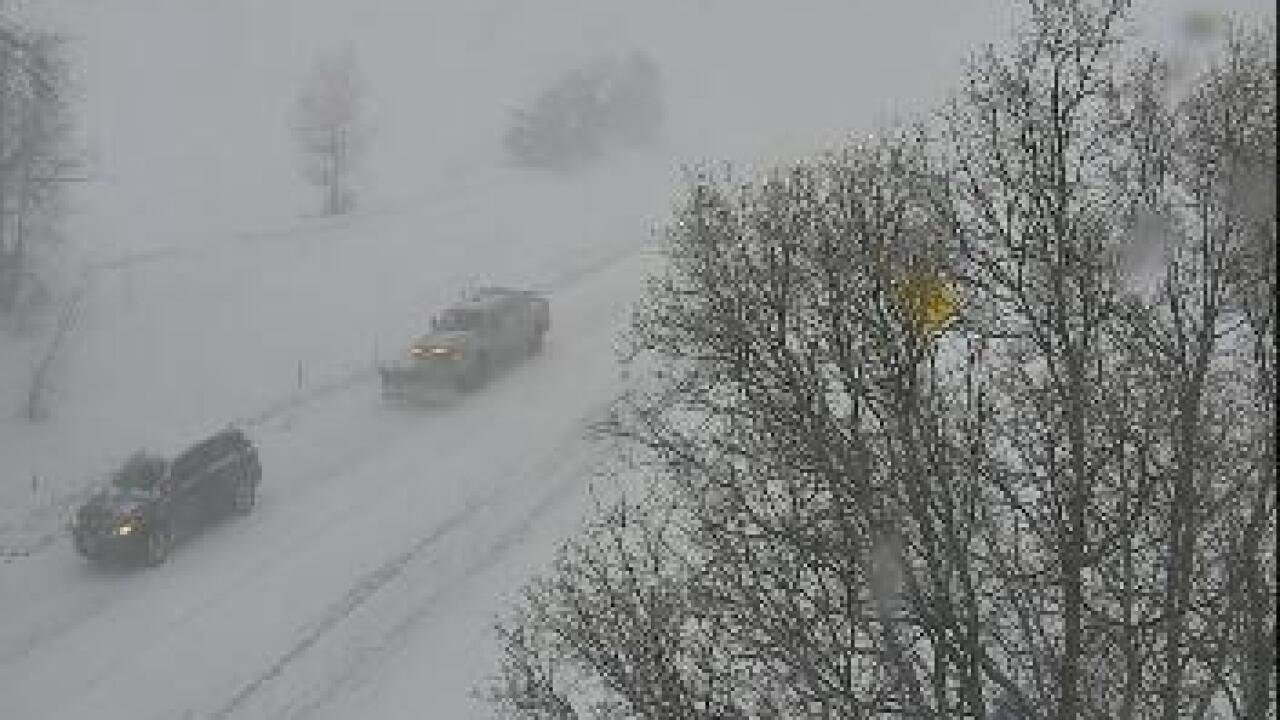 Between the wind and snow, Colorado took quite a beating from Mother Nature on Monday morning. The snow squalls that pounded the Fort Collins, Loveland and Greeley area early Monday have cleared, but conditions will remain unstable in the mountains through the evening.

Safety closures due to blowing snow and high winds are expected around the high country throughout the day today, according to the Colorado Department of Transportation.

Looking at the Denver metro area today, the wind will kick up and bring gusts reaching about 40 mph with light snow possible. Heavier snowfall moved over the plains around 10 a.m., bringing brief, but powerful, bursts of snow that led to rapid changes in conditions and visibility, the National Weather Service out of Boulder reported.

A Winter Weather Advisory remains in effect in the mountains, including Rabbit Ears Pass, Rocky Mountain National Park, the Medicine Bow Range, Mosquito Range, Indian Peaks and the mountains of Summit County, until 9 a.m. Tuesday. Snow accumulations will total between 4 and 8 inches with winds reaching gusts of 60 mph. This wind will not only blow snow around, causing poor visibility, but the temperature with wind chill will hover as low as -30 degrees. The NWS is reminding residents how quickly frostbite can settle in in these kinds of conditions.

A separate Winter Weather Advisory for the South Park area, particularly along Highway 285 from Kenosha Pass to Fairplay, will last until 7 p.m. Monday.

Highway 285 is closed between Fairplay and Grant due to the dangerous driving conditions in the area. There is, or close to, zero visibility along that stretch, according to Colorado State Patrol. At least 10 semi trucks are stuck along the hills without chains.

The weather station in Jefferson, which is about halfway between Fairplay and Grant, reported a wind gust of 109 mph Monday morning.

CDOT said Highway 285 will not reopen until the weather improves.

CSP announced at 10:45 a.m. that eastbound I-70 at Vail Pass had reopened after it closed around 9:20 a.m. due to the unsafe driving conditions. But CDOT said more closures along the interstate, especially in that area, are likely today. CDOT warned drivers that I-70 will likely close between Empire Junction and Dotsero, which includes areas around Georgetown, Silverthorne, Frisco, Copper Mountain, Vail, Avon, Wolcott, Eagle and Gypsum.

Blowing snow combined with strong winds — including gusts over 40 mph — have reduced visibility to a maximum of 40 feet along that stretch, CDOT says. Safety closures could last an hour or more.

Drivers headed out to I-70 today should ensure their vehicle is properly equipped for the weather.

Further north, US 40 reopened in both directions around 10:15 a.m. between Rabbit Ears Pass and Kremmling, though the roads are icy and snow-packed. It had closed earlier Monday due to the conditions. The Grand County Office of Emergency Management issued a late start for its county buildings and the West Grand School District was put on a two-hour delay.

Colorado Highway 14 was closed in both directions between Walden and the highways intersection with U.S. Highway 40 around 1:30 p.m. -- but reopened by 5:30 p.m.

Multiple snow squall warnings were put into effect Monday morning, but all have ended. However, poor driving conditions remain. One of the warnings — for Interstate 25 and US 24 near Colorado Springs, as well as US 24 near Woodland Park — ended at 11 a.m., according to NWS Pueblo. White-out conditions were still possible, plus blowing snow. A second warning, this time in the Fort Lupton and Greeley area, ended at 9:30 a.m.

Looking ahead, snow will move into northeast Colorado, hitting places like Greeley, Akron and Sterling, beginning Monday evening through Tuesday afternoon. According to NWS, snow and wind gusts between 50-60 mph will make travel in the mountains difficult tonight. The worst conditions are expected over the high mountain passes, so expect closures or poor conditions up Loveland Pass and Vail Pass. The high winds already pummeling US 285 around South Park will continue overnight.

Strong winds from the north will roll over the eastern plains Tuesday.