Snow expected across most of the state Wed. - Fri.

Copyright 2019 Scripps Media, Inc. All rights reserved. This material may not be published, broadcast, rewritten, or redistributed.
Dominick Lee, Denver7
Mountain highways, ski areas and all of Lake County closed in March 2019 as a snowstorm pounded Colorado’s mountains, creating “historic” avalanche conditions across much of the central part of the state.

DENVER – Another snowstorm is on its way to Colorado, and the southwestern portions of the state are likely to see their first significant snowfall of the season, with lighter amounts forecast for the central mountains and along the Front Range.

In the mountains, light snow will develop Tuesday night and fall into Wednesday, and the storm is expected to track from southwest Colorado toward the northeast.

The Front Range and foothills will likely see less snow than they received in storms over the past month, with 1 to 5 inches in the area through Friday evening, and less than 1 inch across most of the plains.

But the mountains – especially in southwestern Colorado – are likely to see a much heavier dose. Below, you can find projected snow totals for the storm Tuesday night through Friday evening from the National Weather Service. 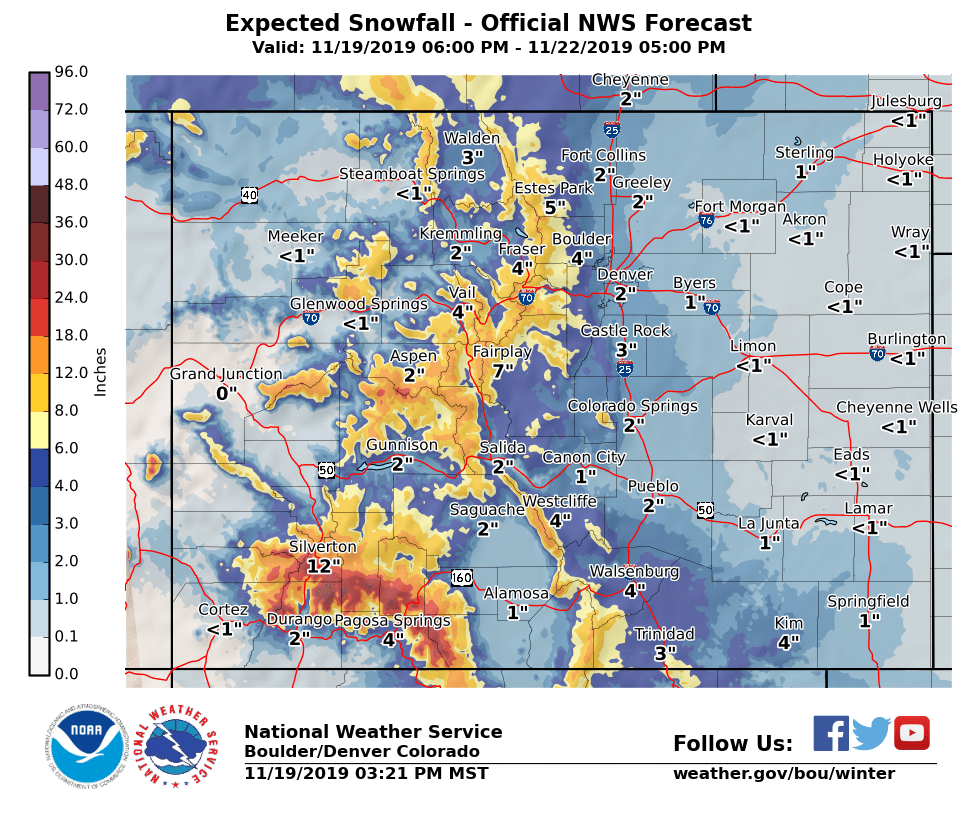 As of Tuesday afternoon, forecasts showed that southwestern Colorado will likely see the highest snow totals from this storm – with 1 or 2 feet possible in the eastern San Juan Mountains above 10,000 feet, and 12 to 20 inches – with up to 30 inches possible – in the southwest and northwest San Juans above 8,500 feet.

Winter storm warnings will be in effect from 5 a.m. Wednesday to 5 a.m. Friday in the Grand and Battlement Mesa, West Elk and Sawatch Mountain areas, where between 10 and 16 inches of snow are expected.

Winter weather advisories will be in place from Wednesday morning until Friday morning for the southern and central mountains, where between 4 and 12 inches of snow could fall through Friday morning.

There is expected to be a dose of snow early Wednesday and another round could develop Thursday evening into Friday morning. Thursday’s temperatures will be chilly and unlikely to get above freezing in most areas.

Stay with the Denver7 Weather Team as the storm continues to develop for the most up-to-date forecasts.