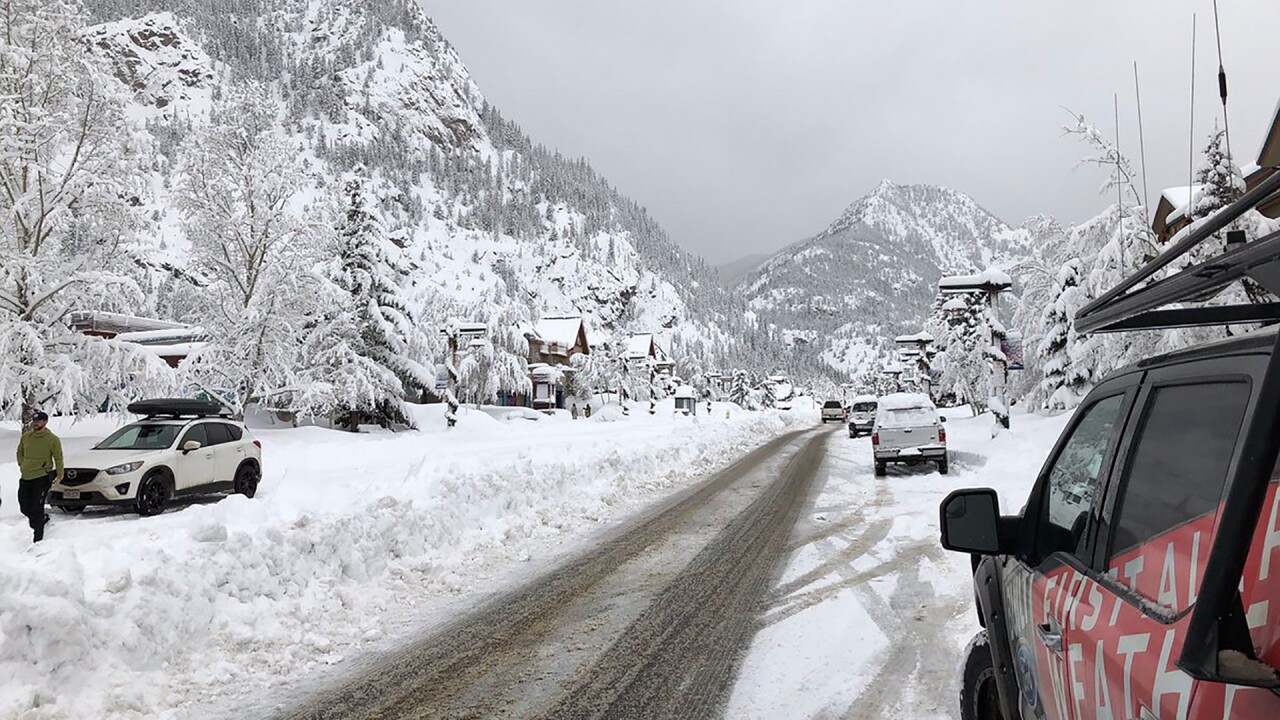 Copyright 2019 Scripps Media, Inc. All rights reserved. This material may not be published, broadcast, rewritten, or redistributed.
Dominick Lee, Denver7
Mountain highways, ski areas and all of Lake County are closed Thursday as a snowstorm continues to pound Colorado’s mountains, creating “historic” avalanche conditions across much of the central part of the state. 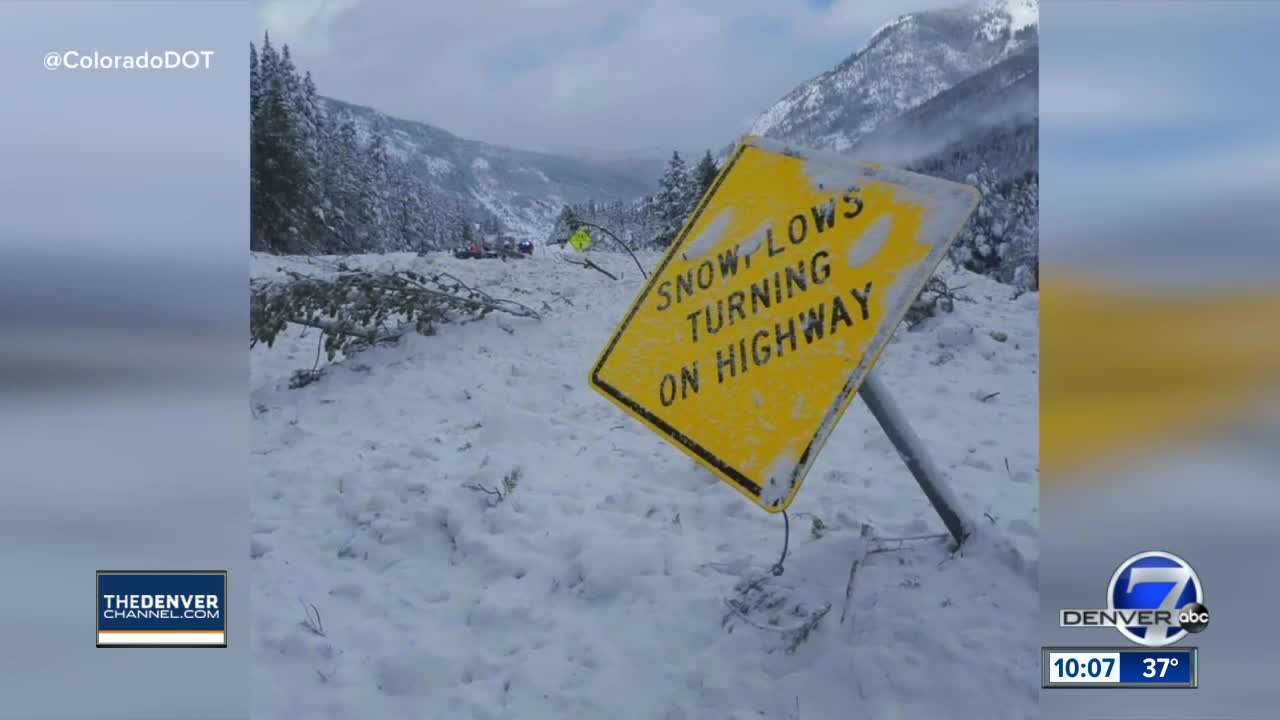 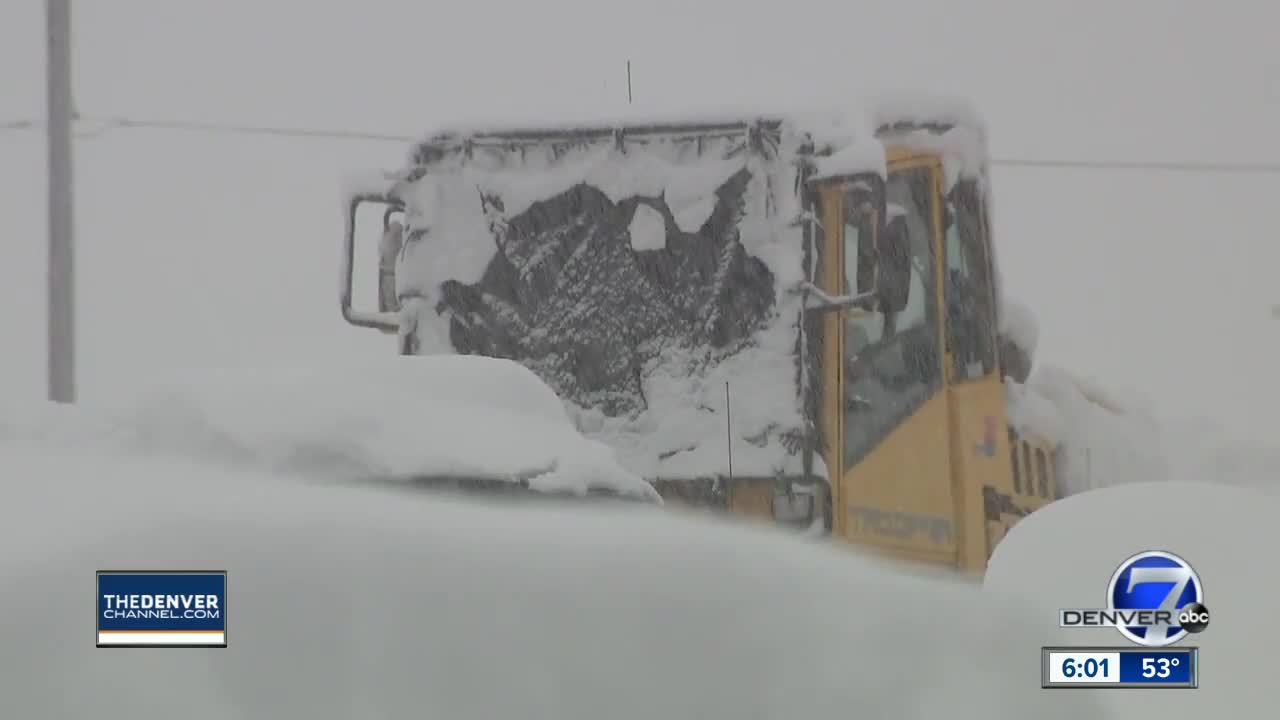 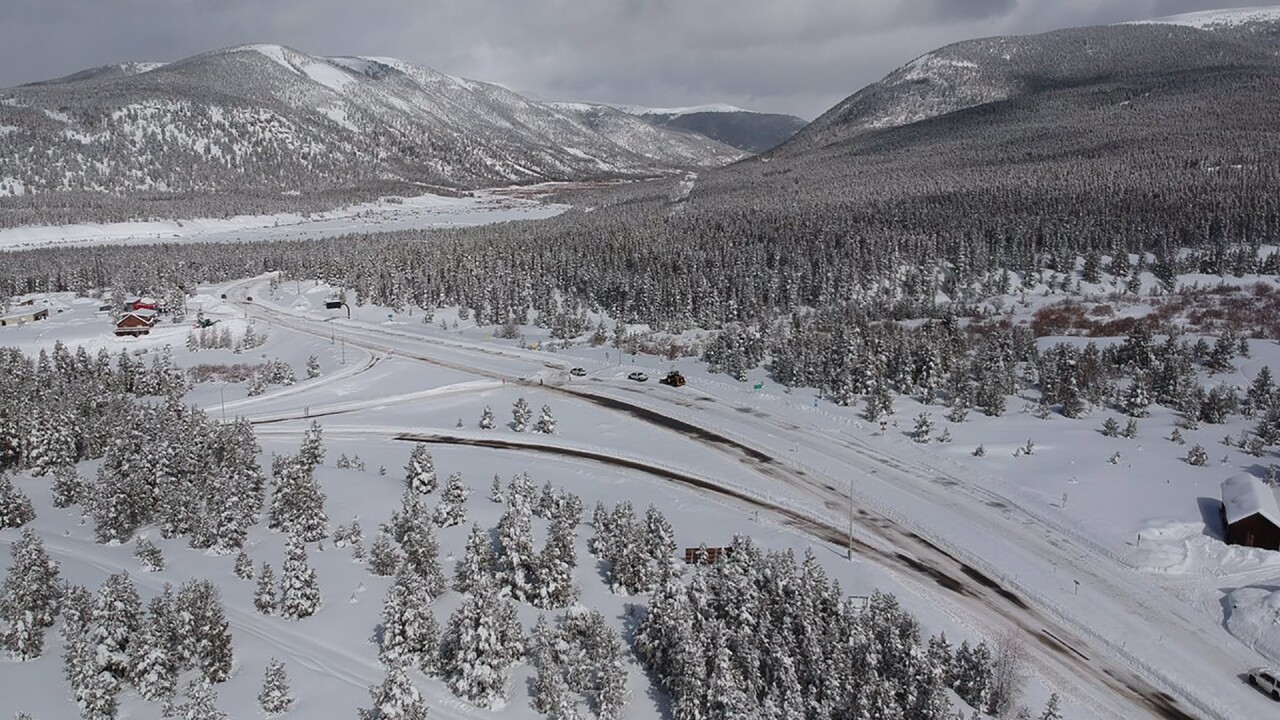 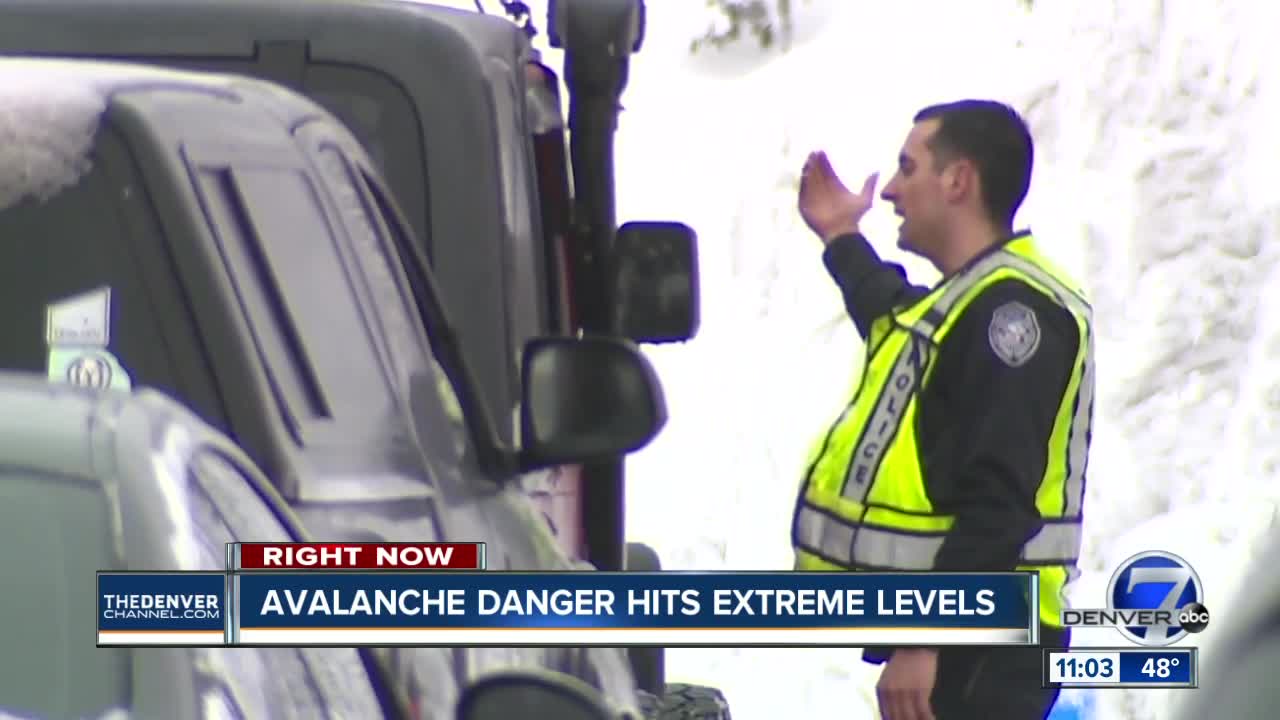 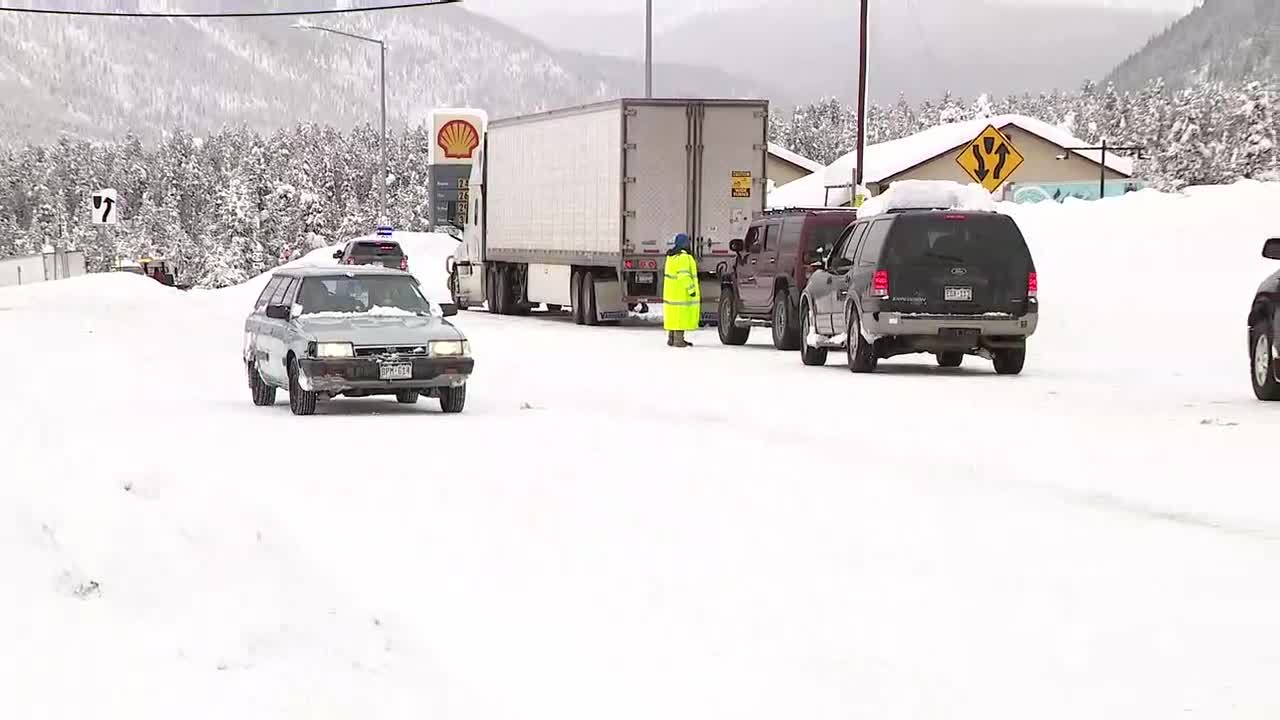 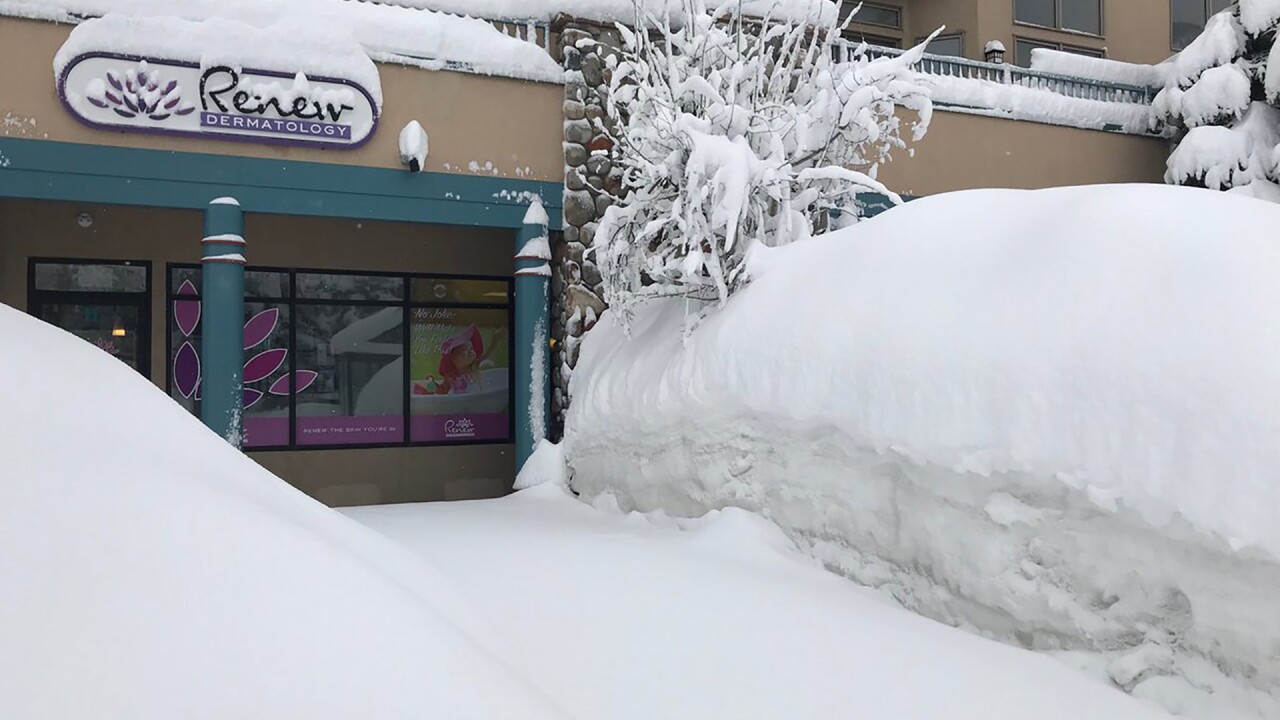 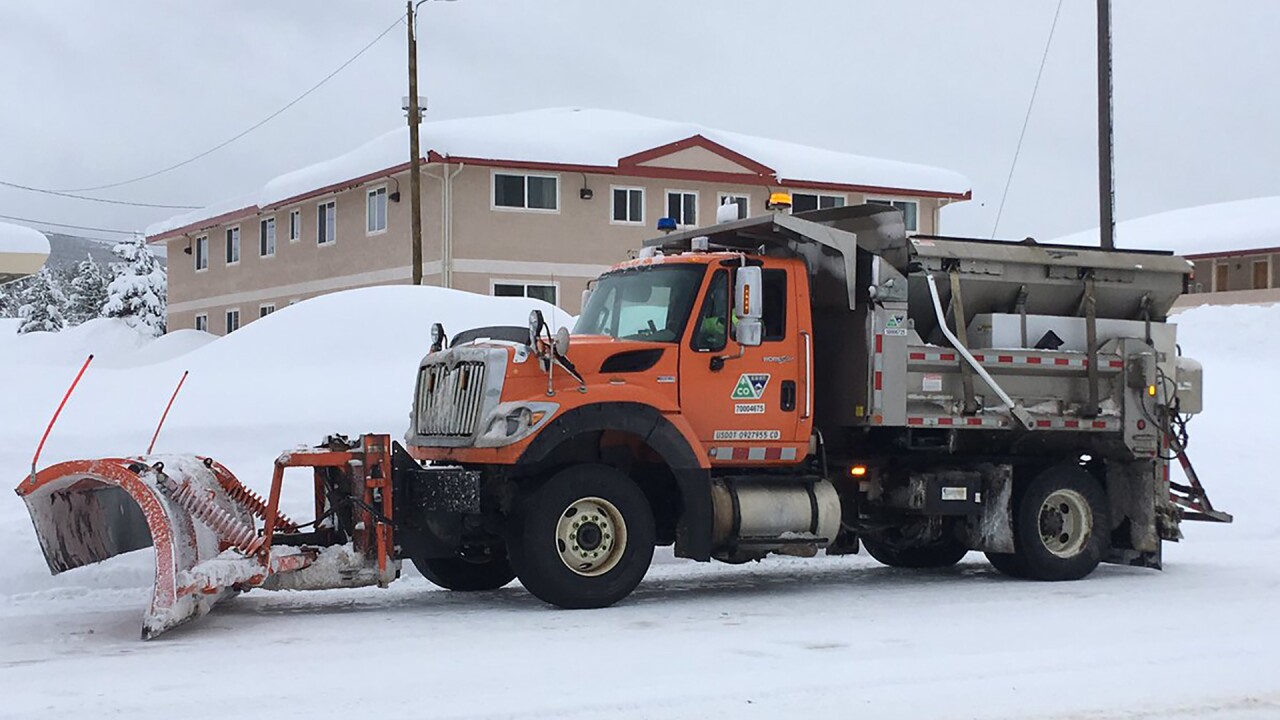 DENVER – Mountain highways, ski areas and all of Lake County are closed Thursday as a snowstorm continues to pound Colorado’s mountains, creating “historic” avalanche conditions across much of the central part of the state.

Asked Thursday afternoon about when Colorado had seen a week of avalanches as bad as this week, the Colorado Avalanche Information Center's Ethan Greene said he'd been speaking with retired avalanche forecasters and CDOT workers in order to put this week into historical context.

"I think it's pretty safe to say that nobody that is alive has seen a week like this," Greene said, adding that he expected CAIC forecasters to be busy for the next week.

An avalanche that ruptured a natural gas line behind the Conoco station at Copper Mountain around 5 a.m., and several other avalanches led to the closure of I-70 in both directions between Copper Mountain and Vail. Copper Mountain Resort was on a delayed opening because of the road closures.

The ruptured gas line created a power outage at the Eisenhower Tunnel. CDOT crews were escorting 100 vehicles at a time through the tunnel in the morning hours.

Interstate 70 reopened between Silverthorne and Empire Junction at 12:40 p.m. after it was closed for about three hours in the area for avalanche mitigation.

While off and on closures along I-70 and other highways has affected mountain travel into the evening hours, CDOT officials said by about 7 p.m. that a main artery of I-70, between Frisco and Vail, had reopened through traffic in both directions.

U.S. 24 reopened in both directions between I-70 and Highway 91 reopened just before 3 p.m. after it was closed for about five hours.

But Highway 91 closed down again from mile markers 0 to 22 just before 4 p.m. after another avalanche hit the highway. It was closed for hours earlier after four reported avalanches. Just before 8 p.m. that section of the highway had reopened once again.

This is the video view of the point of origination, path & destination of the #avalanche that closed CO 91 on Thursday between Copper Mountain & Leadville @ABC @DenverChannel pic.twitter.com/DeNhCIGoLC

CSP Trooper Gary Cutler told Denver7 that there was a natural slide at mile marker 19 on Highway 91 that trapped three or four cars. Cutler said the slide was 15 feet deep and 300 feet wide. Cutler said some occupants got out of their vehicles and called 911. Summit County search and rescue crews said they were told all parties were OK after the slide. Click here for more information about the avalanche and burial. Highway 91 will remain closed overnight.

Greene said he could not estimate the number of slides that occurred Thursday because the weather was keeping observers and forecasters from being able to see all the avalanches. He said there was a report of a backcountry recreationalist involved in a slide near Jones Pass and that a search and rescue operation had been ordered.

Highway 91, between Copper Mountain and Leadville, was expected to reopen by about 9 p.m., CDOT officials also said.

In Lake County – southwest of Breckenridge and Copper Mountain – the office of emergency management told everyone to stay home Thursday.

“Everything in Lake County is closed, Hwy 91 is closed,” the office wrote in a Facebook post. “If you have an urgent need to be on the roads, please check with your destination to ensure they are open. It is recommended staying at home. … There are power outages in Lake County and they may continue to occur.”

The office said that snow was expected to increase to 2 inches per hour after 3 p.m. Thursday and that the county was expecting between 12 and 18 inches of more snow into Saturday morning.

Leadville and Lake County governments will be closed Friday as well.

Arapahoe Basin ski area did not open on Thursday because of high avalanche danger on the nearby Loveland Pass. The ski area received at least 14 inches of new snow overnight into early Thursday.

A-Basin’s Alan Henceroth said the ski area had seen several avalanches on the East Wall and outside of the ski area boundary near Highway 6.

“At this time, no one in our leadership circle is comfortable opening the highway and the parking lots. We continue to work very closely with CDOT. There is no chance we will open today. Our avalanche mitigation efforts are continuing. Stay tuned for more updates about tomorrow,” Henceroth wrote in his blog.

Henceroth wrote later Thursday that A-Basin would be closed Friday morning as well but that the ski area intends to open by Friday afternoon.

Breckenridge Resort said its upper mountain lift and terrain will be closed Thursday as well “due to adverse conditions” and said the lower-mountain lifts could be delayed as well.

Lift 9 at Loveland Ski Area is closed Thursday, and several lifts and Magic Carpets will be delayed. Both Keystone and Winter Park opened at 9 a.m.

Copper Mountain is likely to only run three lifts Thursday, and getting there has proven difficult for most. By 4:20 p.m., power was out in the majority of the Center Village.

U.S. Highway 50 was also shut down just before 2 p.m. at Monarch Pass due to a crash and bad weather conditions. CDOT says the closure could stretch into an already planned closure set for this evening at 5 p.m. Eastbound travelers are currently being stopped in Sargents while westbound drivers are being stopped at Monarch Ski Area. After 5 p.m., the westbound closure will move 10 miles east to Maysville until at least 8 p.m.

U.S. Highway 550 will remain closed over Red Mountain Pass through the weekend for avalanche mitigation and cleanup after several large slides came down over the past week.

SNOW! Lots and lots of snow. The roads keep closing in and out of #Leadville. pic.twitter.com/C09hHMJKom

There were road advisories in place across Pitkin County for the Aspen area due to poor road conditions.

The Colorado Avalanche Information Center said “historic” avalanches were possible across much of the central mountains, and avalanche danger was rated as “extreme” – the most dangerous classification – across the Vail and Summit County, Sawatch, Gunnison and Aspen avalanche zones.

Extreme danger means that no one should travel in the backcountry.

EXTREME Avalanche Danger (5 of 5) and an Avalanche Warning for Vail and Summit County, Sawatch, Gunnison and Aspen zones. Do not travel in the backcountry. Historic avalanches expected to valley floors. #CAICSummit #CAICSawatch #CAICAspen #CAICGunnison pic.twitter.com/xQuOXw6wTf

The mountain snow is expected to continue into Thursday afternoon, with another round moving in Friday into Saturday. The extreme avalanche danger comes after two extended closures of I-70 over the past several days after the highway was covered by massive controlled avalanches near Vail Pass, Copper Mountain and Herman Gulch.

CDOT also advised drivers on what to do should an avalanche or powder cloud come barreling down toward the road in front of you:

If you're traveling to the mountains Friday, prepare for avalanche mitigation work in the morning and potential road closures. Make sure you also have an emergency kit with you and adequate traction.