DENVER – This week’s second snowstorm started a little early Tuesday – but don’t be fazed by the snow that has fallen so far, because the heaviest amounts aren’t expected until late Tuesday morning through the evening.

Winter storm warnings went into effect for much of the northern and central Front Range, northeastern plains, foothills and mountains at 6 a.m. Tuesday and will remain in place through noon Wednesday. Winter weather advisories are in place for the mountain valleys, eastern Palmer Divide and southeast plains.

The Front Range corridor and eastern plains should expect 5-10 inches of snow through noon Wednesday for the total storm. The northern and central mountains will receive 6-14 inches and the foothills are expected to receive 6-14 inches as well, according to the National Weather Service.

In areas where there are winter weather advisories, people should expect 4-7 inches of snow through noon Wednesday.

The National Weather Service said the snow will likely be heaviest between 2 p.m. and 8 p.m. Tuesday and that light snow will fall overnight into the morning. 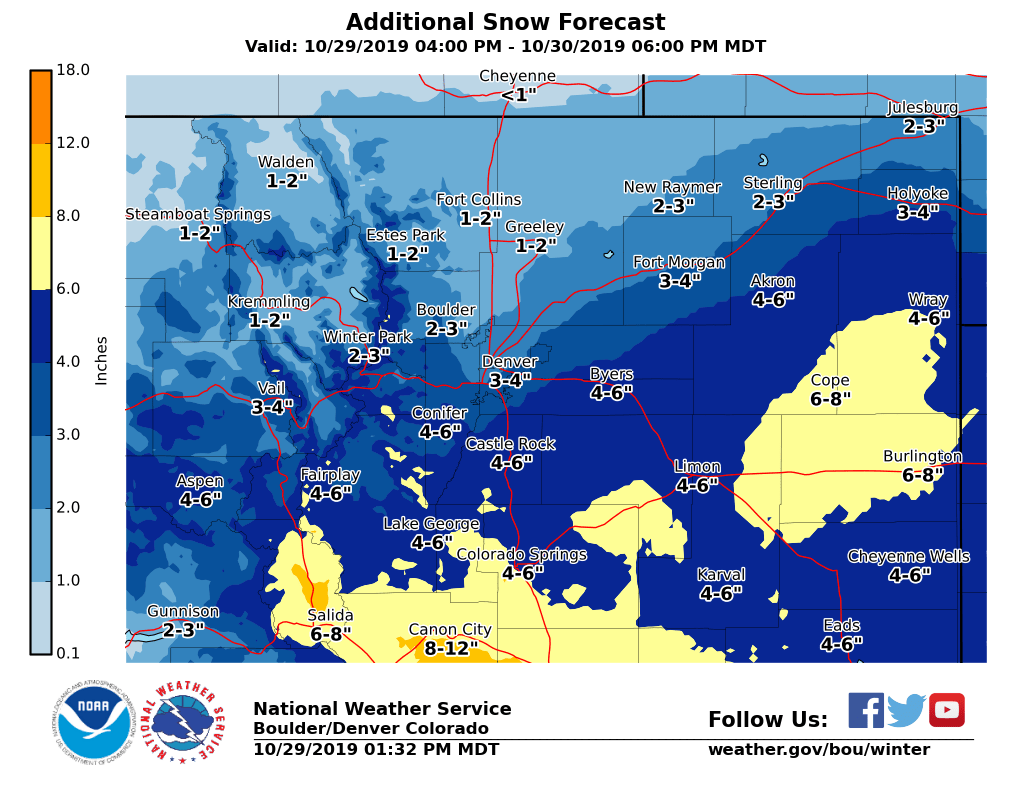 Road conditions will deteriorate again after sunset and should make for a slow commute Wednesday morning.

Accompanying the snow will be extremely cold – and likely record-breaking in some places – temperatures through the next couple of days.

Temperatures in the Denver area will only reach the teens Tuesday and likely break the coldest maximum temperature record for Oct. 29 of 25 degrees. Overnight lows could reach the single digits and possibly below-zero levels and will likely break Wednesday morning’s record low of 7 degrees.

Stay with the Denver7 weather team and TheDenverChannel.com for the latest forecast updates, weather and traffic conditions throughout Colorado as the storm continues.