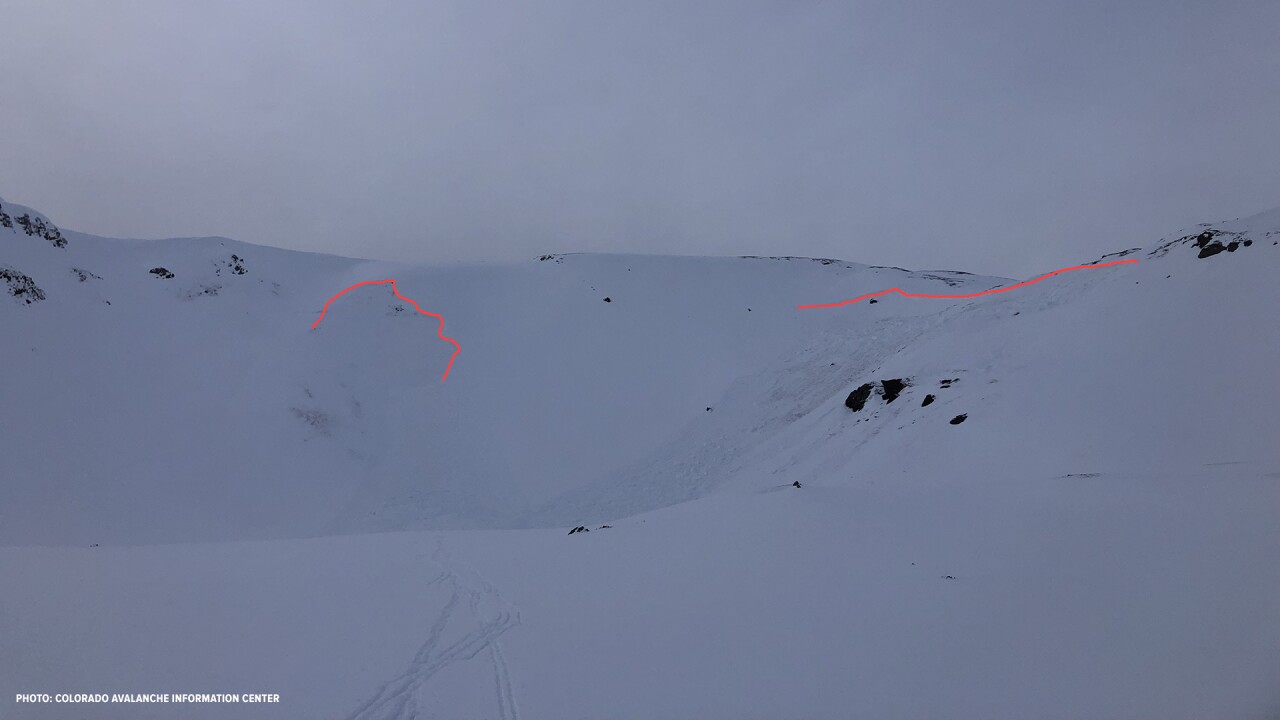 Copyright 2019 Scripps Media, Inc. All rights reserved. This material may not be published, broadcast, rewritten, or redistributed.
The backcountry skier killed in an avalanche Saturday northwest of Red Mountain Pass was part of a group that was participating in an avalanche safety course when two avalanches were triggered, burying the man.

OURAY COUNTY, Colo. – The backcountry skier killed in an avalanche Saturday northwest of Red Mountain Pass was part of a group that was participating in an avalanche safety course when two avalanches were triggered, burying the man.

A preliminary report from the Colorado Avalanche Information Center says that six skiers were caught in the avalanche, but the man who was killed was the only skier who was buried.

The group was taking part in an avalanche safety course when they triggered the first avalanche, which then triggered a second avalanche from a nearby ridge, the report says. The avalanche happened in the Upper Senator Beck Basin northwest of Red Mountain Pass in southwest Colorado.

The combined force of the avalanches buried the man in “at least 2.5 [meters] (8+ feet)” of snow, the CAIC report says. The group located the man, dug him out and tried to revive him, but was unsuccessful, the CAIC said.

CAIC Executive Director Ethan Greene told Denver7 Monday that the group was training with the Silverton Avalanche School when the avalanche occurred.

The school said in a press release Monday morning that the group was taking a “Recreational Level 2 American Institute of Avalanche Research and Education Avalanche Course” when the avalanche happened.

“This tragic accident impacts all of us and our deepest condolences go out to the family. Our number one priority at this time is ensuring the safety and well being of the family of the victim and the students and staff involved in the accident,” the school said in the release.

The Durango Herald on Monday identified the skier as 40-year-old Peter Marshall of Longmont, though authorities have not confirmed that information to Denver7.

The school said it was working closely with the CAIC in the investigation and documentation of the avalanche. The school has been providing avalanche safety training since 1962.

Greene said Monday that the CAIC investigators were working to collect all the information about the avalanche to put together a report, which he said could be released next week.

There was moderate avalanche danger in that area on Friday after several feet of snow fell last week. After more snow on Sunday, the area was under “considerable” avalanche risk on Monday, and much of the central and northern mountains were under “high” avalanche danger.

Greene said it was important that anyone going into the backcountry check the avalanche forecast, understand where the danger is and how to avoid it. He said no one should enter the backcountry without the proper equipment – a beacon, probe and shovel – and proper training.

Greene told Denver7 that the occurrence of deadly avalanches during avalanche safety training courses in Colorado was rare, but not unprecedented.

On March 6, 2005, a 32-year-old skier was participating in a similar Level II avalanche safety class in the Five Fingers Bowl near Aspen Highlands when he was swept about 3,000 vertical feet down the mountain in an avalanche and killed.

This was the first deadly avalanche of the season in Colorado so far. Last season, three people were killed in avalanches across the state.

For the latest information and conditions from the CAIC, click here.