FBI, authorities search for 'armed and dangerous' teen after 'credible threat' to schools 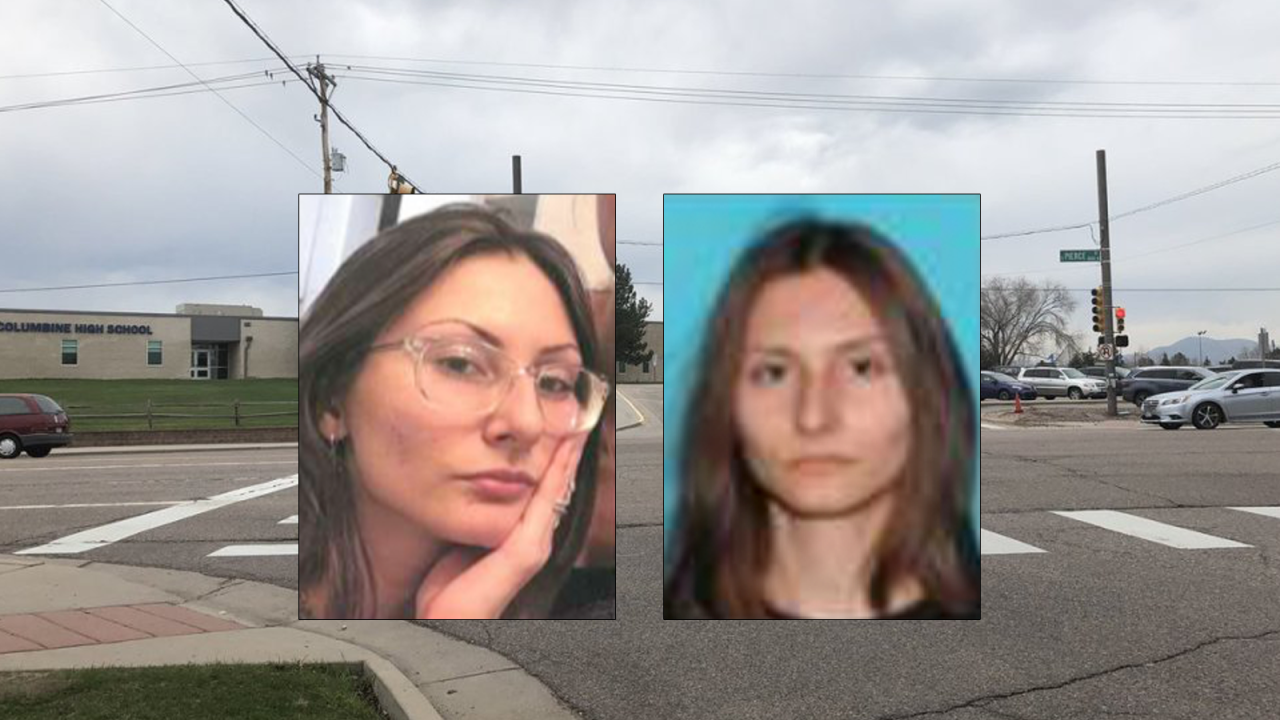 Copyright 2019 Scripps Media, Inc. All rights reserved. This material may not be published, broadcast, rewritten, or redistributed.
Courtesy FBI
The FBI and Jefferson County Sheriff&#39;s Office are looking for 18-year-old Sol Pais in connection to the threats. The Jefferson County Sheriff&#39;s Office said Pais traveled to Colorado Monday night and made threats. They said she is described as 5-foot-5 inches tall, with brown hair. She was last seen wearing a black t-shirt, camouflage pants and black boots and was last seen in the Jefferson County foothills. 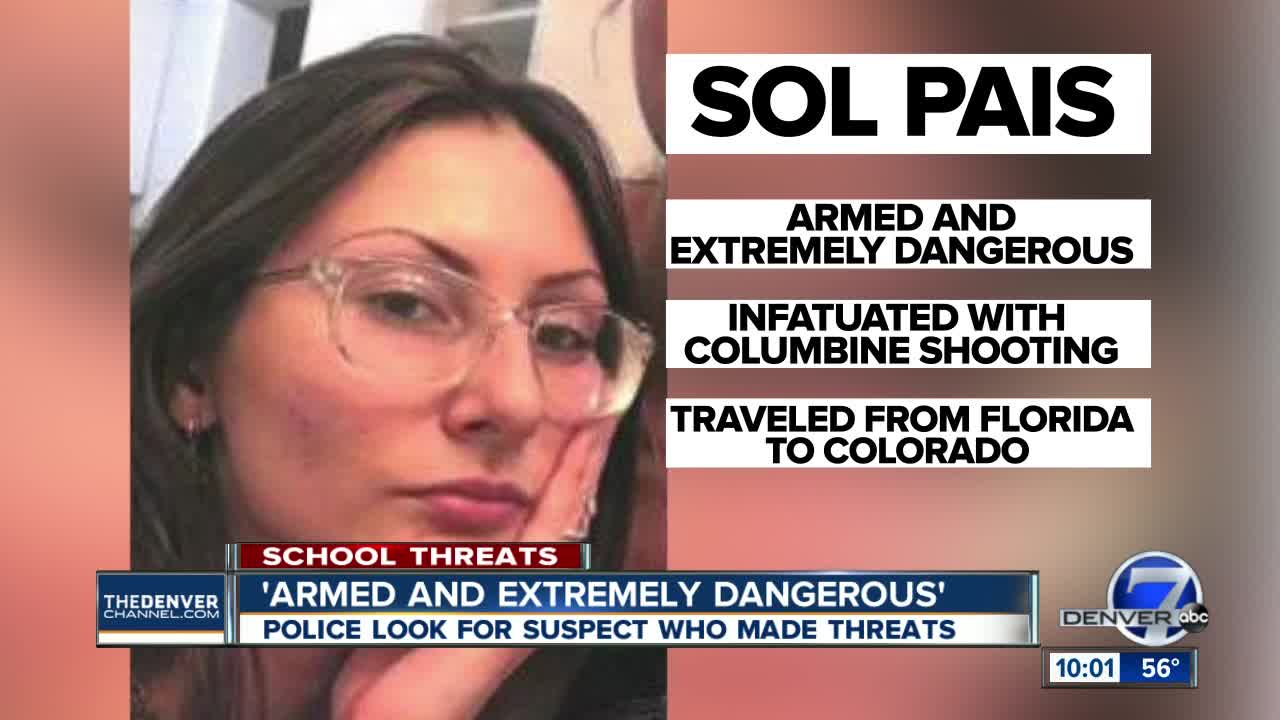 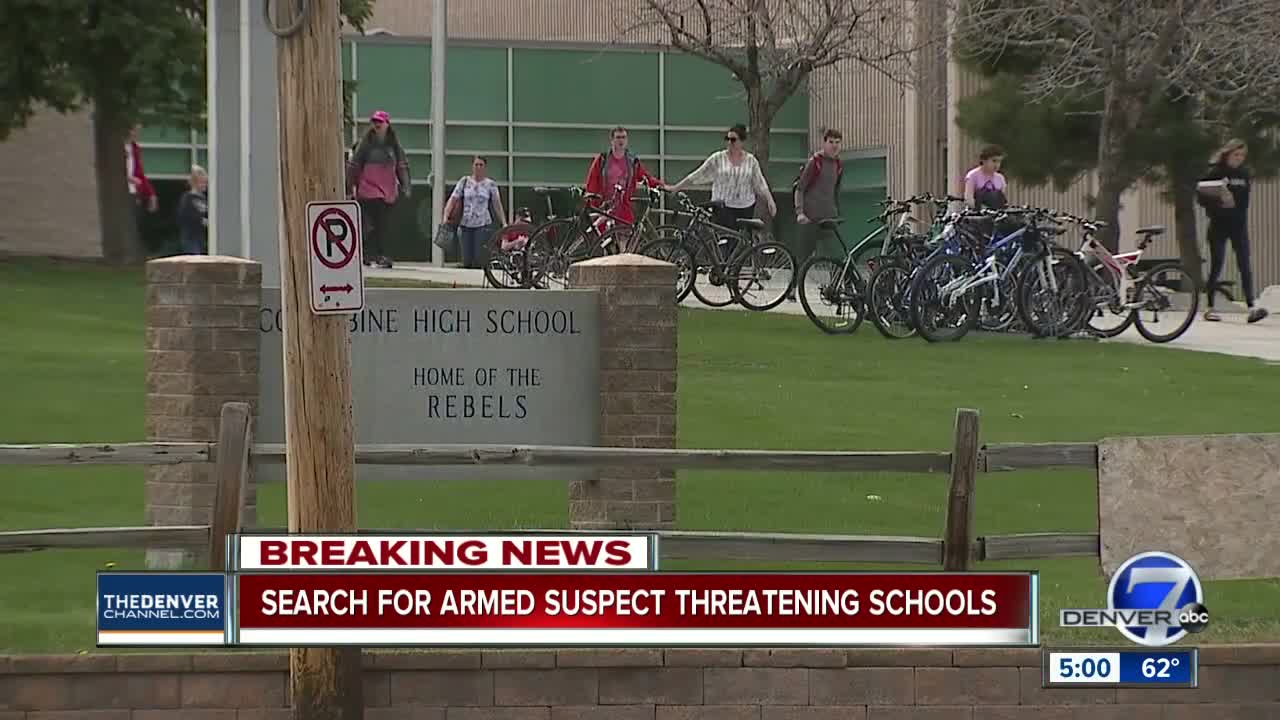 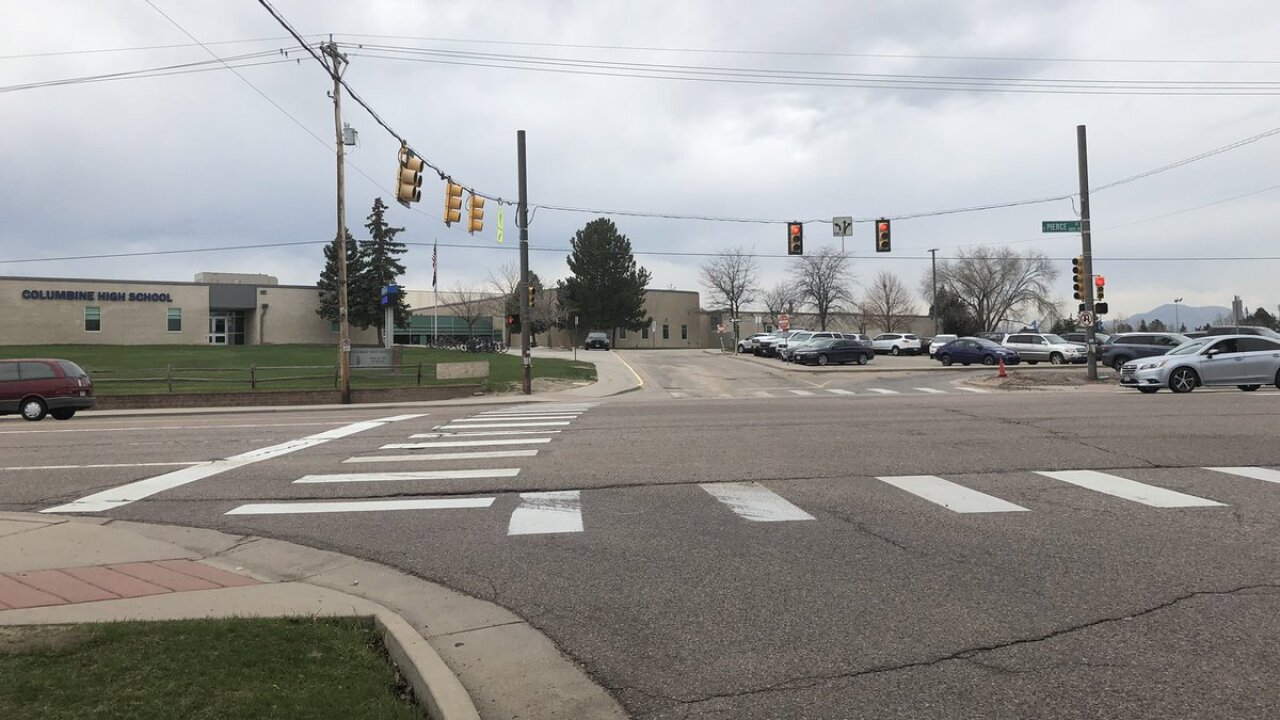 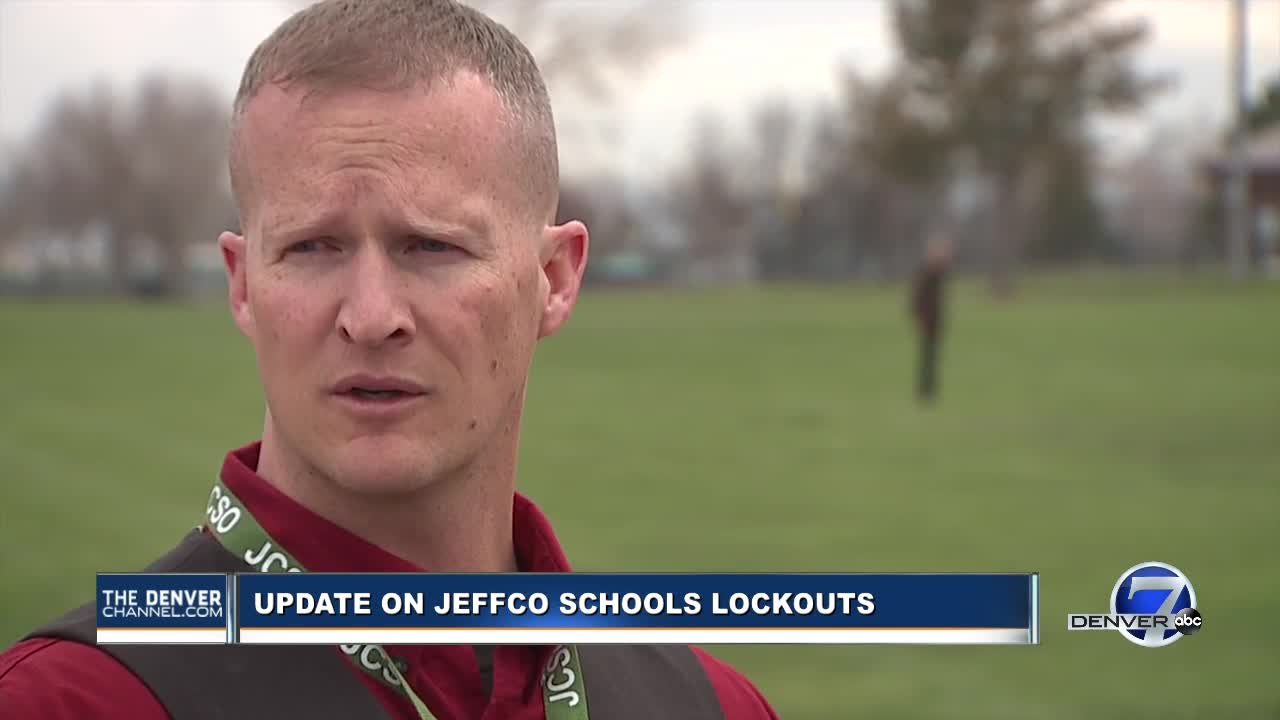 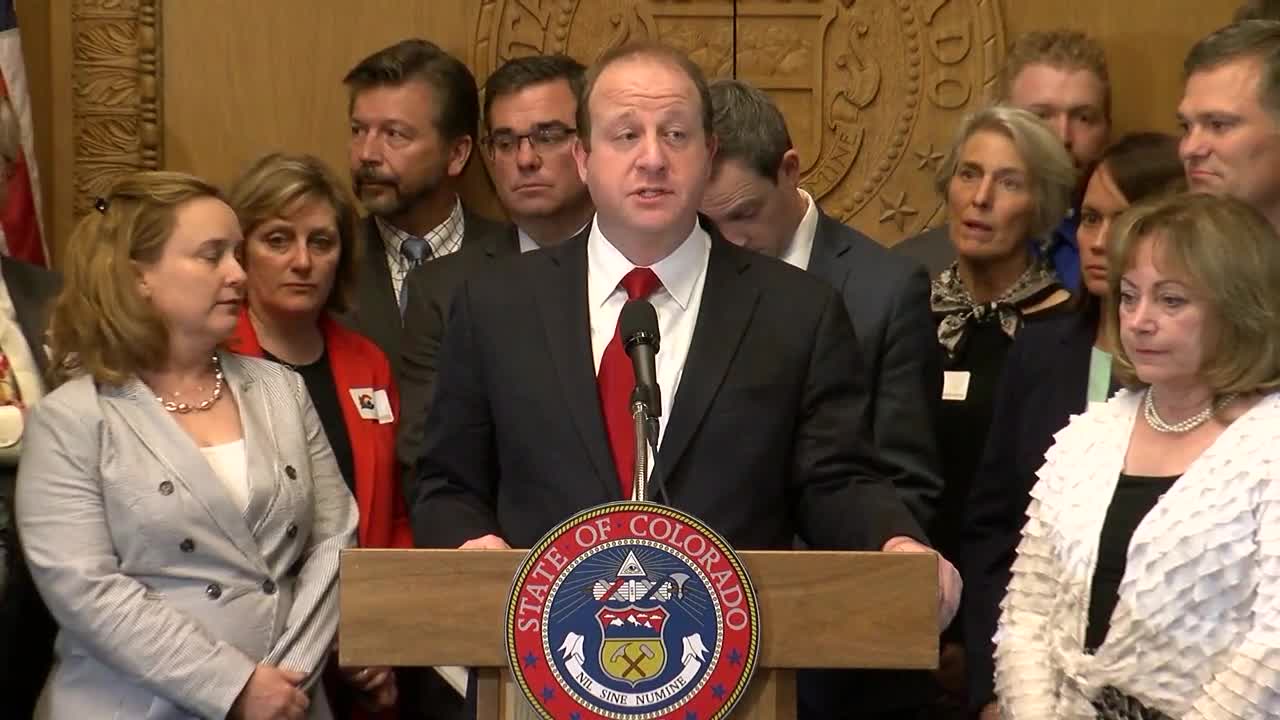 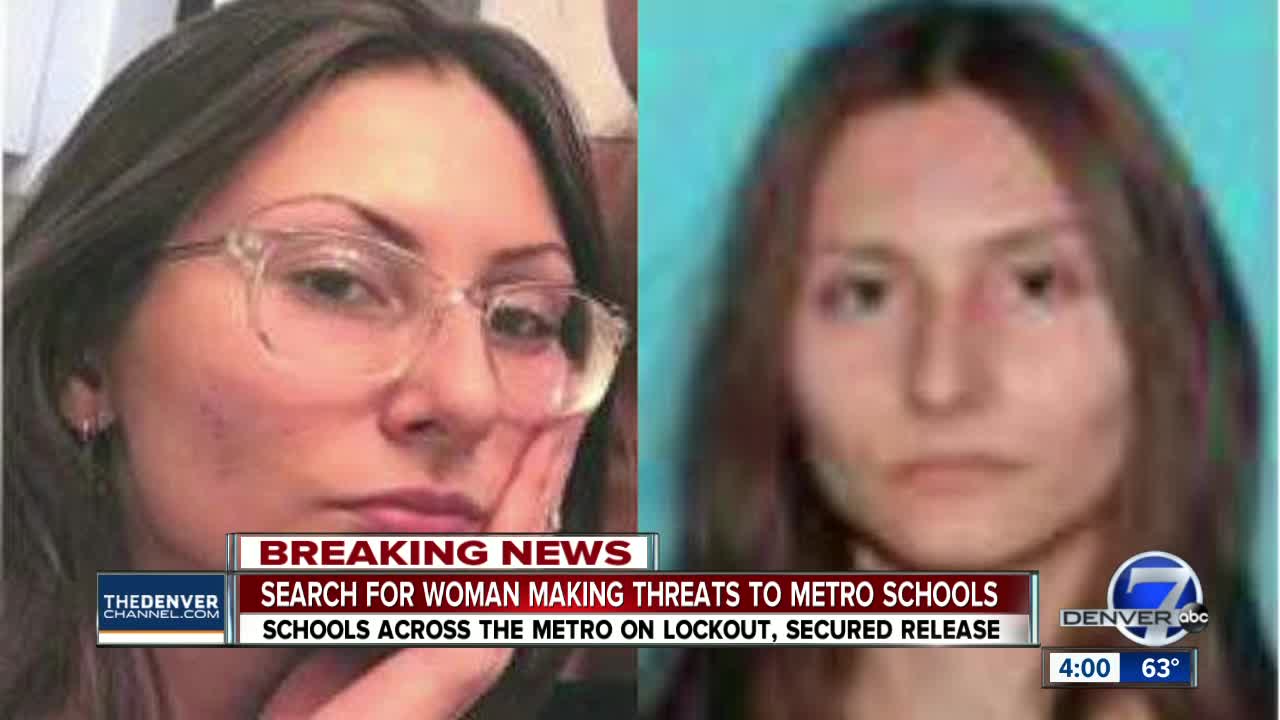 UPDATE: Denver-area schools will be closed on Wednesday as authorities continue to search for the woman they say is behind the threats. Click here for more on closures.

JEFFERSON COUNTY, Colo. – Several Jefferson County schools, including Columbine High School, were placed on lockout Tuesday afternoon because of what the sheriff’s office said “appears to be a credible threat.” The FBI and other authorities are looking for an 18-year-old woman who is believed to be connected to the lockouts and who is considered armed and dangerous, according to the FBI.

A Jeffco Public Schools spokesperson said several schools in the Columbine and mountain areas of the district were on lockout at 1 p.m. but said “everyone is safe.” The spokesperson, Diana Wilson, said business was operating as usual within the schools but no one was allowed inside or outside.

“It is our understanding they are searching for a suspicious person,” Wilson said.

The FBI and Jefferson County Sheriff's Office are looking for 18-year-old Sol Pais in connection to the threats. Pais traveled to Colorado Monday, landing at Denver International Airport later in the evening. Pais went to a gun store soon after arriving and purchased a shotgun and ammunition, the FBI said during an Tuesday evening press conference.

They said she is described as 5-foot-5 inches tall, with brown hair. She was last seen wearing a black t-shirt, camouflage pants and black boots and was last seen Monday in the Jefferson County foothills.

Authorities say she should be considered armed and extremely dangerous. Anyone with information is asked to call the FBI at 303-630-6227.

"Sol Pais is armed and dangerous. We are operating out of an abundance of caution. The threat is not isolated to one school or individual," the FBI tweeted Tuesday evening. "Federal, state, and local law enforcement are working together to keep our community safe."

Miami ABC affiliate WPLG went to a Surfside, Fla. address linked to Pais Tuesday afternoon. An FBI agent answered the door and told reporters they couldn't say anything about why they were at the home. A man who said he was Pais' father told WPLG that he was in disbelief and that he last saw his daughter on Sunday. He confirmed authorities were looking for his daughter and encouraged her to come home. Our partners at The Denver Post called the same address and a person who said he was with the FBI told a reporter that they were in the middle of an interview.

MORE: Lockout vs. lockdown: Knowing the difference after threat to Denver-area schools

A Denver7 photojournalist at the scene at Columbine said deputies were at the scene and all entrances to the school were blocked as of 2 p.m.

Jeffco Public Schools said at 2:30 p.m. that all students would be released normally and buses would be running on a normal schedule. The district said all students and staff were safe and that extra safety and security staff would be on site at the affected schools.

"Thank you for your patience as we worked through this safety issue," the district tweeted.

At 2:48 p.m. the Colorado Department of Education tweeted: "Due to a credible threat to schools by an individual identified by the FBI, the Department of Public Safety recommends all schools in the Denver metro area conduct a lockout and controlled release immediately. More info to come."

A "BOLO" sent out by Rocky Mountain Safe Streets Task Force says that Pais is "infatuated with Columbine school shooting" and was "attempting to buy firearms." It also says "NO PC TO ARREST" meaning authorities at the time the BOLO was created did not have enough probable cause to arrest her. The sheet also says, "If contacted detain and evaluate mental health status then contact Det. Gilbert immediately."

"CDPS will continue to monitor this situation and coordinate with the FBI and the Jefferson County Sheriff's Office as information is available. We will be establishing a Joint Information Center to manage information flow as this issue develops," the department said in a release.

Gov. Jared Polis briefly spoke about the situation ahead of a bill signing Tuesday afternoon.

"Our Department of Public Safety is working very closely with the FBI to protect the public ... to keep school districts and schools updated," Polis said. "We do not have additional information to share at this point."

The Aurora Police Department said it was "taking this threat seriously" and that it was working with Aurora Public Schools and Cherry Creek Schools.

"The threat being investigated is to schools in general, and we are working together across the metro area to gather more information," Aurora police tweeted. "We will keep everyone updated as soon as we can, in the meatime [sic] in Aurora we are increasing police presence at our schools."

Aurora police said just after 2:30 p.m. they were still investigating the general school threats and that people will see extra officers at schools in Aurora during the investigation.

"We are in close communication with @AuroraPD regarding the non-specific threat," Cherry Creek Schools tweeted. "They have not requested that we place any schools in secure perimeter. We have placed additional security officers throughout the district out of an abundance of caution."

Denver Public Schools has staff members accompanying students as they leave their school. Kids are not being allowed outside alone. Police are at DPS schools for dismissal times.

Douglas County Schools were also placed on lockout at the request of the state Department of Public Safety. Officers are at Parker schools as they are dismissed. Adams 12 said it was on precautionary lockout because of the state's recommendation just before 4 p.m. 27J Schools' middle and high schools were all placed under the precautionary lockout for the rest of the day and have seen all after-school activities canceled.

About 150 schools and districts along the Front Range have canceled classes Wednesday.

Saturday marks the 20th anniversary since the shooting tragedy at Columbine High School.