Structures burn in multiple wildfires across Front Range of Colorado 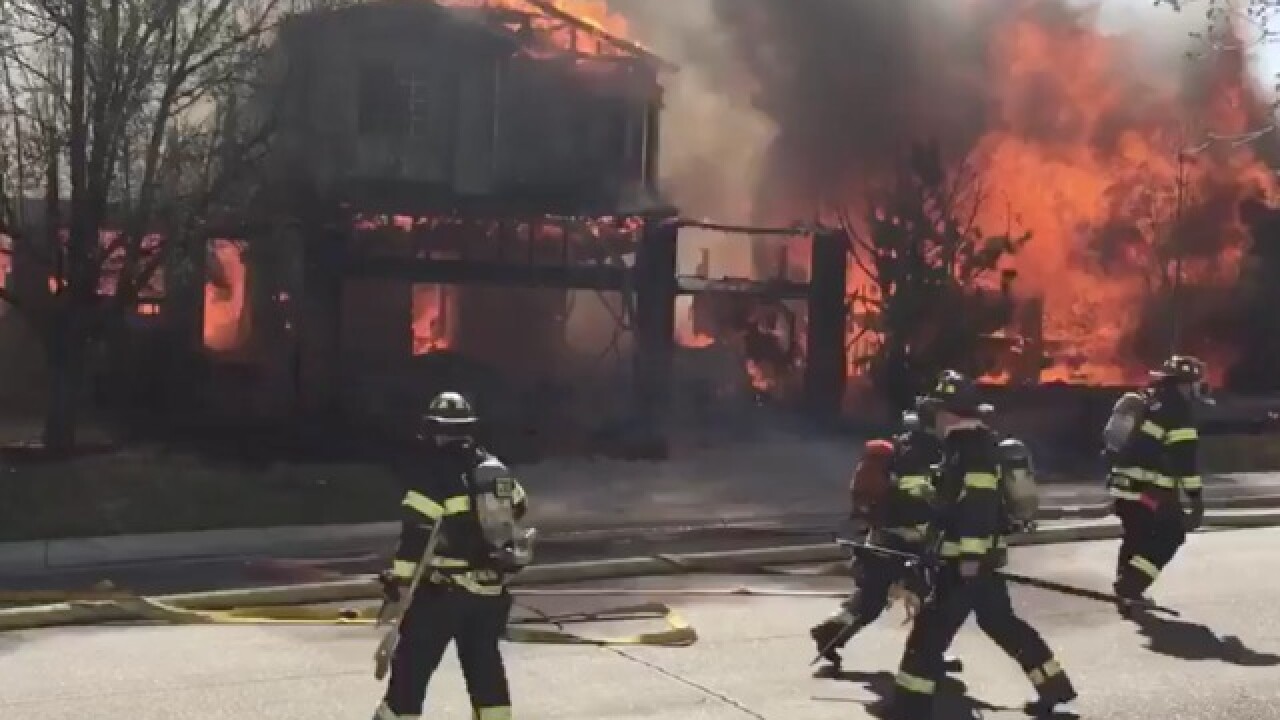 CASTLE ROCK, Colo. – Several homes and other structures were damaged or destroyed in several wildfires that ravaged Colorado's Front Range Tuesday, including one that continued to spread in El Paso County Tuesday evening into Pueblo County, where it threatened the Pueblo Chemical Depot.

In Castle Rock, a fire that started at one home spread to others nearby and eventually damaged seven homes in total.

South Metro firefighters responded a call of a single house fire in the 4800 block of North Foxtail Drive in the Meadows neighborhood at about 10 a.m. The winds quickly pushed the flames to neighboring homes and firefighters evacuated some nearby residents as they worked to get the flames under control.

In all, seven homes were affected, firefighters said. Some of the damaged homes were a street over from Foxtail Drive, on Silverlace Drive, authorities said.

"I was on a call, and I heard a lot of like screeching noises," said Sandy Brantley, who lives nearby. "I thought it was the street cleaner coming up and then heard some loud pops."

Two of the homes were deemed to be total losses, and the other five homes received minor to moderate damage, according to Castle Rock Fire.

"I feel horrible for them," Brantley said. "I just don't know how they're going to react."

It’s still unclear what caused the fire at this time.

Castle Rock Fire said it wasn’t aware of any injuries in the fire as of 5 p.m., but said two dogs were missing from the first home that burned.

Separately, crews from multiple agencies responded to a wildfire burning to the south, near Tomah Road and Dawson Butte. Homes in the Keene Ranch area were given pre-evacuation notices to be ready to leave. Those notices have since been lifted.

As of 11 a.m., Larkspur's fire chief said the Tomah Road fire was being mopped up. The fire was estimated to be about three quarters of an acre in size.

The 117 Fire burning in El Paso County had claimed 10 structures as it moved eastward Tuesday afternoon. Mandatory evacuation were ordered in the Hanover area, which included Hanover Schools.

More info on the Stage II Fire Restrictions that go into effect immediately.
1. All open fire & open burning is banned
2. Sale/use of fireworks is banned
3. Outdoor smoking is banned except within an enclosed vehicle or building
Click link for more - https://t.co/QHyUAwAzhO

#117Fire Update - to clarify on this evacuation map. The entire colored area is under **mandatory** evacuation orders. The different shades indicate different phases of the evacuation that went from west to east. #wildfires pic.twitter.com/VzDqcPc6RF

El Paso County Sheriff Bill Elder said at least 10 buildings were burned in the fire, along with a sheriff's office patrol car.

At 8 p.m., the Pueblo County Sheriff's Office said the Pueblo Chemical Depot was under pre-evacuation orders because of the fire, which both agencies are fighting.

And another fire burned east of Pueblo Tuesday afternoon, but was fully contained shortly after 8 p.m., the sheriff's office said. One deputy and a firefighter were both taken to an area hospital to be treated for smoke inhalation, and three other first-responders were treated at the scene, officials said.

In addition, Highway 67 is closed southwest of Sedalia because of a fire there. That fire — initially dubbed the Rampart Fire, now called the Indian Creek Fire — prompted pre-evacuation notices for addresses from 0000 to 3000 Highway 67.

The fire is estimated to be about 5-7 acres in size with 60-70 percent containment.

Officials said the Douglas County Fairgrounds would be open to house large animals.

Conditions across the state have been dry, warm and very windy, with gusts between 40 and 60 miles per hour, and all of southeastern Colorado is under a fire weather warning.

The wind also is creating a problem for travel in the state -- The Colorado Department of Transportation issued a high wind restriction for I-70 from Denver to Kansas, meaning high-profile and light vehicles as well as those carrying empty trailers are not allowed on the road.