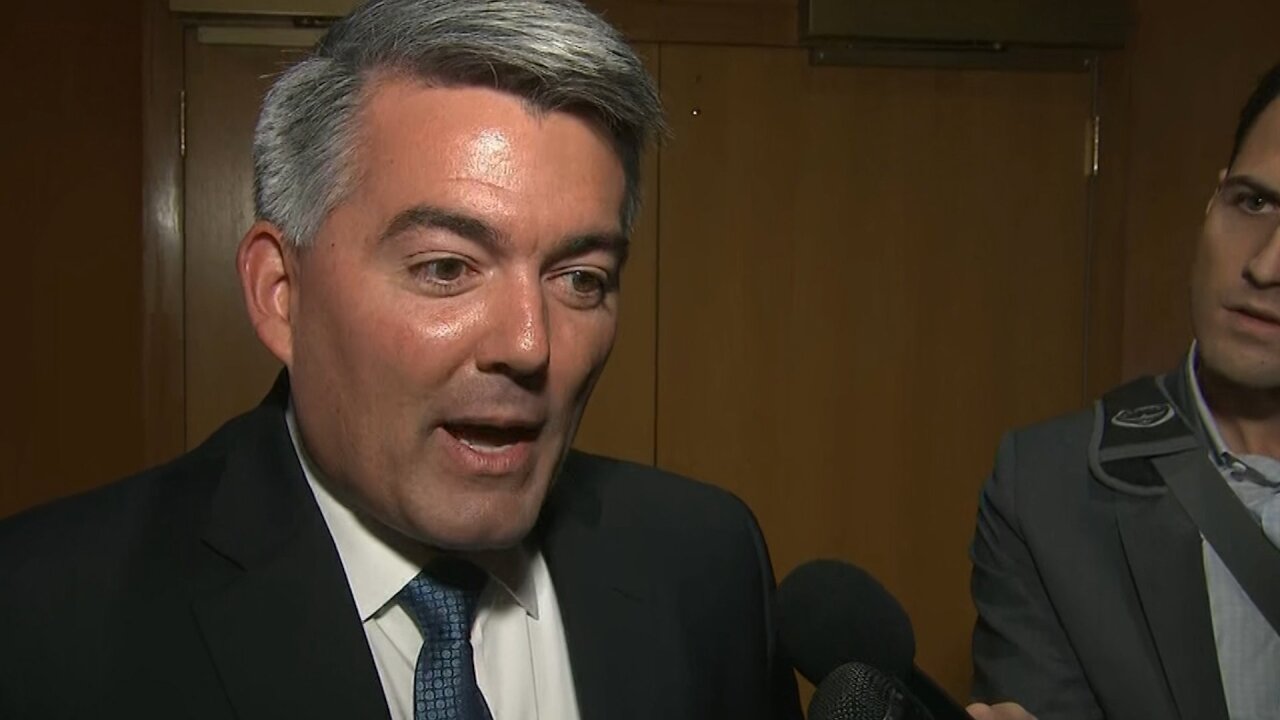 Copyright 2019 Scripps Media, Inc. All rights reserved. This material may not be published, broadcast, rewritten, or redistributed.
CNN/CNN
Several GOP senators running for reelection are also running away from what would seem to be a straight-forward question: Is it appropriate for President Donald Trump to ask a foreign government to investigate his political opponent?

(CNN) -- Several GOP senators running for reelection are also running away from what would seem to be a straight-forward question: Is it appropriate for President Donald Trump to ask a foreign government to investigate his political opponent?

Rather than answering directly, Republican after Republican have sidestepped the question, contending the matter has to be investigated first -- even though Trump himself said publicly on the south lawn of the White House that Ukraine and China should investigate Vice President Joe Biden and his son, Hunter.

But to Senate Republicans, particularly ones who need Trump's support to win difficult reelections, that admission is simply not enough.

"Well look, that's what we're going to get into," Republican Sen. Cory Gardner of Colorado said Thursday when pressed by reporters if it was appropriate for Trump to make that ask. "The Senate Intelligence Committee is having an investigation, a bipartisan investigation."

Gardner, facing one of the toughest reelections of any Republican in the country, repeated that refrain again and again throughout a tense exchange with reporters in Denver.

CNN sent reporters and cameras crews across the country during the two-week congressional recess to put the question to key GOP senators. And it's clear that Republicans are in a difficult spot: They don't want to anger Trump or his supporters by raising concerns with what the President said was a "perfect" call with the Ukrainian President, but they also don't want to condone his actions as more voters believe that they are worthy of an impeachment inquiry.

And many facing difficult reelection races are relying on a common playbook to avoid answering: point to the Senate Intelligence Committee to investigate the matter while attacking the House's impeachment probe.

"We're going to have to wait and see what happens once it goes to the Senate Intelligence Committee," said Sen. Joni Ernst, an Iowa Republican up for reelection.

"Every senator voted for the Senate Intelligence Committee to look into the matter in a bipartisan way," Arizona GOP Sen. Martha McSally told 12 News KPNX this week. "I think what we've seen out of Pelosi and Schiff and others in the House is quite partisan and I think people want us to take a serious look at this and not have it be just partisan bickering going on."

McSally, who is running in 2020 in a state Democrats consider competitive, seemed to be referring to the Senate approving by voice vote a resolution calling for Trump to release the whistleblower to Congress. The Senate has not taken a vote on authorizing any investigation into the matter.

Pressure will increase on GOP lawmakers when Congress reconvenes next week and they are forced to the run the gauntlet of the Capitol press corps, which is anxious to get their reaction to the fast-moving developments, including the arrests this week of associates of Rudy Giuliani who were helping dig up on Biden in Ukraine.

Some Republicans, though, have been quick to give Trump a pass.

"I'm going to leave it to the President to make that decision," North Carolina Sen. Thom Tillis told CNN on Wednesday morning when asked if the President's actions were appropriate, following a town hall meeting with farmers alongside Agriculture Secretary Sonny Perdue in Monroe, North Carolina. "I've seen the transcript, I've seen the complaint, and if that alone is all they're using to drive all the resources in the House, then I think it's a waste of resources."

Now, many Republicans are relying on a Senate committee that its leaders have acknowledged will take a slow, methodical approach in its investigation.

The Senate Intelligence Committee is investigating the whistleblower allegations like its House counterparts, but there are several key differences that go beyond the obvious fact that the House's investigation is to consider whether to impeach the President.

The chamber is also in no rush to get out answers, which could lead to a more thorough investigation but also raises the prospect that, if the House impeaches Trump, the question will be before the Senate as an impeachment jury before the Senate committee has released any findings.

"Don't expect us to move at light speed -- that will probably happen in the House," Senate Intelligence Chairman Richard Burr, a North Carolina Republican, said last month after hearing from acting director of national intelligence Joseph Maguire and Intelligence Community Inspector General Michael Atkinson. "But the committee is committed to make sure we get to the bottom of questions (that) need answers."

Senate Majority Leader Mitch McConnell said that tapping the Senate Intelligence Committee to undertake an investigation was the "responsible, rather apolitical, at least bipartisan way to proceed with what we think we know at this particular point."

The tactic worked for the Senate when it probed allegations of Russian election meddling and contacts between Trump's team and Russians. While the House investigation devolved into partisan warfare, the Senate conducted a bipartisan probe.

Of course, the Senate investigation is still chugging along, more than two years in: the committee has so far released two of the five reports it's planning to issue.

Some Republicans speak out

There have been a handful of Republican senators who have criticized Trump's comments, including one in a battleground Senate 2020 contest: Susan Collins of Maine, who took issue with his call for China to investigate.

"It was clearly wrong, and I was stunned when the President came out this week and said that he had asked the Chinese to investigate his political opponent," Collins told Maine Public Radio.

Other Republicans have also criticized the President's actions while arguing they don't rise to the level of an impeachable offense.

"The President should not have raised the Biden issue on that call, period," Sen. Rob Portman, an Ohio Republican, told the Columbus Dispatch, but added: "I don't view it as an impeachable offense. ... I think the House frankly rushed to impeachment assuming certain things."

Sen. Lamar Alexander, a retiring GOP senator from Tennessee and close ally of McConnell, had initially said he wanted to wait for the Intelligence Committee to reach its conclusions. But he issued a new statement Wednesday saying "it's inappropriate" for Trump to talk to foreign governments about digging up dirt on a political rival, but that "impeachment would be a mistake" with an election "just around the corner."

That's a message that is likely to please Trump and a sign of a probable communications strategy from Senate GOP leaders as they return to the Capitol.

"This is a serious process, let's take it seriously," Gardner said Thursday when refusing to answer directly about whether Trump was right to ask for the foreign governments to probe his political rival.

Then, Gardner scolded a reporter about focusing too much on four states where Republican senators are facing tough reelections.

"You write about four states," he said. "You write about Maine, North Carolina, Colorado and Arizona when you talk about impeachment. Now, to me that sounds more about campaign year politics then it is about the seriousness of this issue."