Sen. Cory Gardner votes for repeal of Obamacare in failed effort, staying true to his past 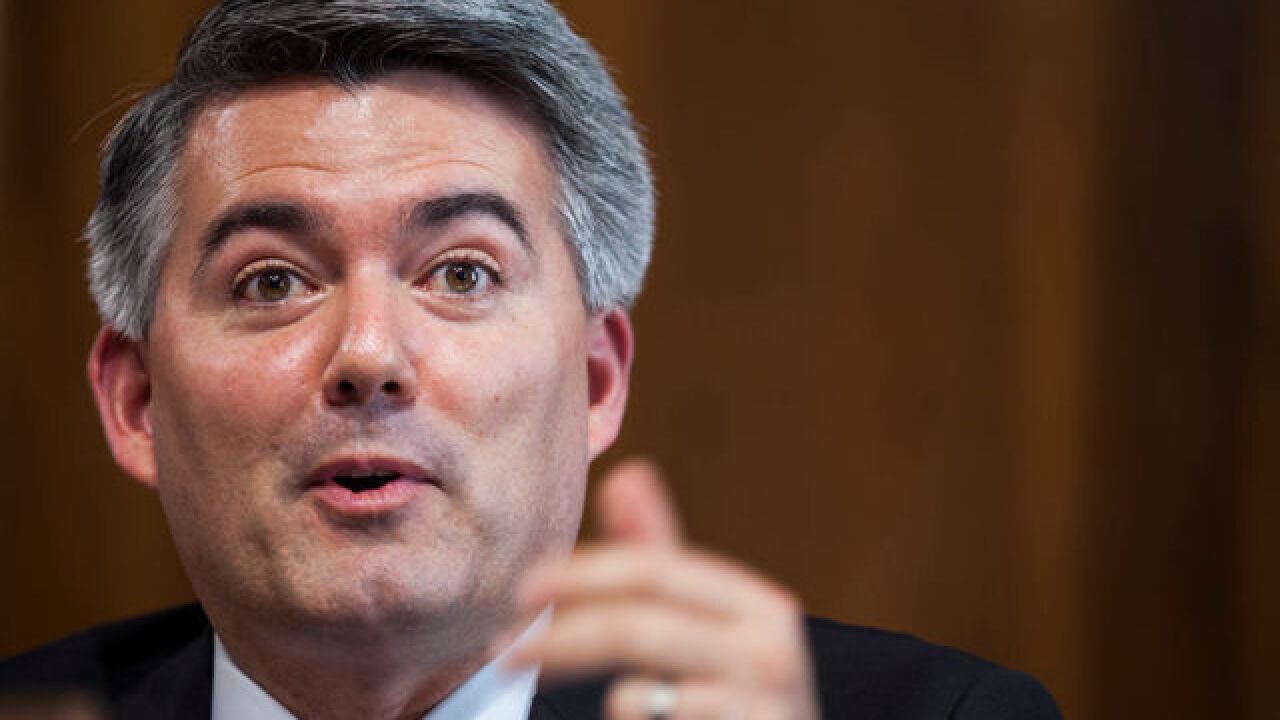 DENVER – U.S. Sen. Cory Gardner voted Wednesday to repeal much of the Affordable Care Act in another failed effort by Senate Republicans—keeping in line with how he voted in his first days as a senator in 2015 and holding true to his years-long promise that he’d repeal the health care law.

Gardner and his staff have avoided answering any questions in recent weeks about how he might vote in the latest efforts by the GOP to reach a party-wide compromise to repeal the ACA, also known as Obamacare, and possibly replace it later. But he'd spoken out in recent months against a straight-repeal bill, as well as against any bills that wouldn't adequately cover the Medicaid population or people with pre-exisiting conditions.

Wednesday’s vote was on a bill that would have repealed much of Obamacare without an immediate replacement.

It was destined to fail early on, as three Republican senators voted against the bill early in the vote. Republicans can only afford to lose two votes on any bill requiring only a simple majority.

But it ended in a 45-55 vote, with seven Republicans voting against the latest effort.

One of those “no” votes came from Sen. Lamar Alexander of Tennessee, who chairs the Senate’s health committee, and some of the others came from senators who voted in favor of the full repeal in 2015.

The Congressional Budget Office said last week the repeal-only bill the Senate voted on Wednesday would leave 32 million additional people without insurance by 2026 compared to under Obamacare—the highest estimate of uninsured among all the Republicans’ bills so far.

Sen. Michael Bennet, D-Colo., cast the last vote on the bill—a “no,” as was expected.

"Voted no on [Senate Republicans'] repeal with no replacement. Bill would've kicked millions off insurance. Relieved it failed, but the fight continues," Bennet tweeted afterward.

Gardner’s Wednesday vote came after he supported the motion to proceed to floor discussion on the health care efforts Tuesday afternoon. Later Tuesday evening, he also supported a procedural vote on the Better Care Reconciliation Act of 2017 (BCRA) with added amendments. That bill needed 60 votes to pass, but failed in a 43-57 vote.

Gardner cast both of his votes after each bill had already failed, meaning he didn’t cast any grandstanding votes against either bill, though he could have.

He is the chair of the National Republican Senatorial Committee, which is tasked with raising money and helping current and prospective Republican senatorial candidates hold or gain new seats, and has more pressure from leadership than some senators to adhere to their wishes.

And over the past few months, he’s said several times he wanted to be sure any bill the Senate passes adequately covers concerns he’s said he’s had over reductions in Medicaid spending and threats to people with pre-existing conditions over rising costs.

Gardner said on a radio program earlier this month that he opposed a plan that had been floated at the time by Sen. Ben Sasse, R-Neb., to repeal Obamacare and replace it at a later date—exactly what McConnell’s latest effort aimed for.

And in both March and June, Gardner was adamant about protecting the Medicaid population.

But Gardner’s actions Wednesday are nothing new for him.

He voted in the Senate in 2015 to repeal Obamacare and send the bill to President Barack Obama’s desk (Obama vetoed the bill), and also spent much of his time in the U.S. House of Representatives pushing for an Obamacare repeal and voting for any repeal measures when they came up.

“I’m disappointed the president prioritized his personal legacy instead of recognizing that his law has failed the American people,” Gardner said when Obama vetoed the bill in January 2016.

Children’s Hospital Colorado on Tuesday implored Gardner and Bennet to make an effort to stop bills that would damage the state’s Medicaid program, but focused on Gardner.

“For more than a half-century, long before the Affordable Care Act (ACA) and long before the health care debate was poisoned by partisanship, the United States has protected kids in need of healthcare,” Children’s Hospital board chairman Bill Lindsay said. “Sen. Gardner has been an eloquent spokesman for the need to protect children on Medicaid, and now he has the opportunity to act on those principles.”

Now, Republicans will move onto another version—possibly a “skinny” repeal that has been floated in recent days that would be taken to conference committee with the House for further amending, though even getting to that point could prove difficult for Republicans, whose efforts so far haven’t come close to passing. They were only narrowly able to get to floor discussion by getting Vice President Mike Pence to break the tie on the motion to proceed Tuesday.

Democrats are also expected to offer dozens of amendments during this discussion Thursday to try and further halt Republicans’ efforts.