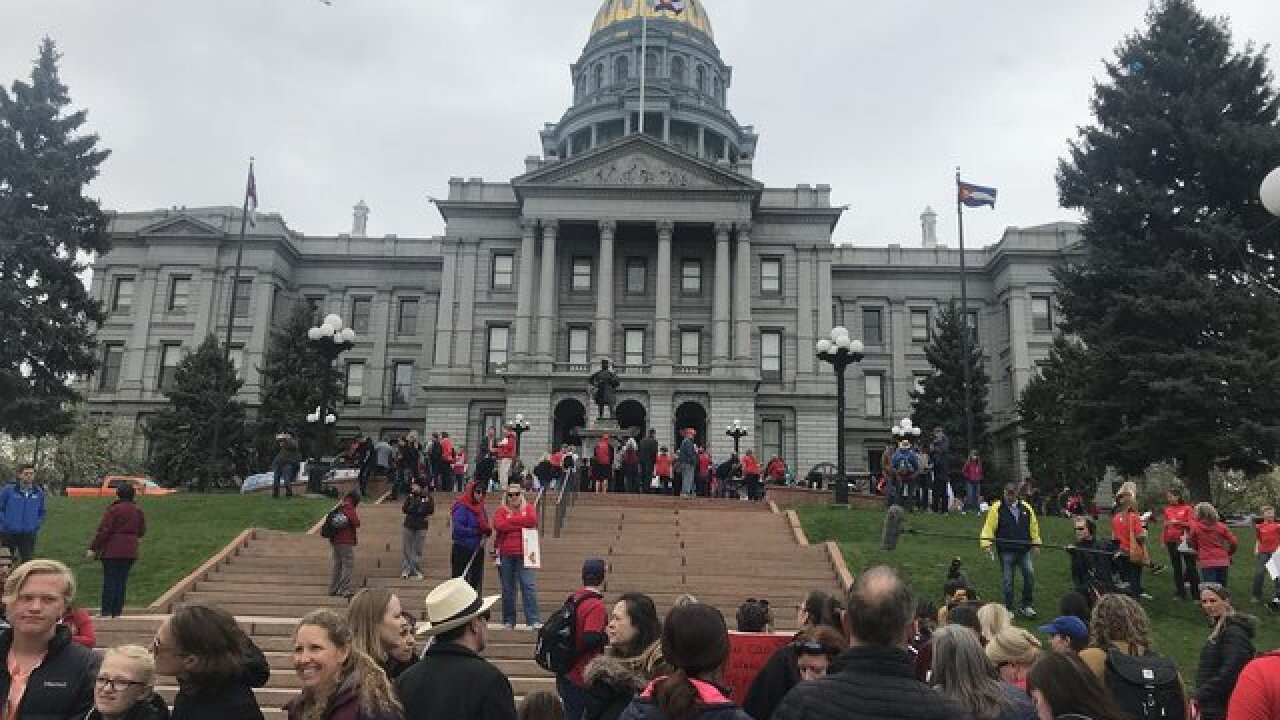 Copyright 2018 Scripps Media, Inc. All rights reserved. This material may not be published, broadcast, rewritten, or redistributed.
<p>Thousands of teachers from across Colorado are converging on the Capitol this week to rally for better pay, school funding and pension reform.</p> 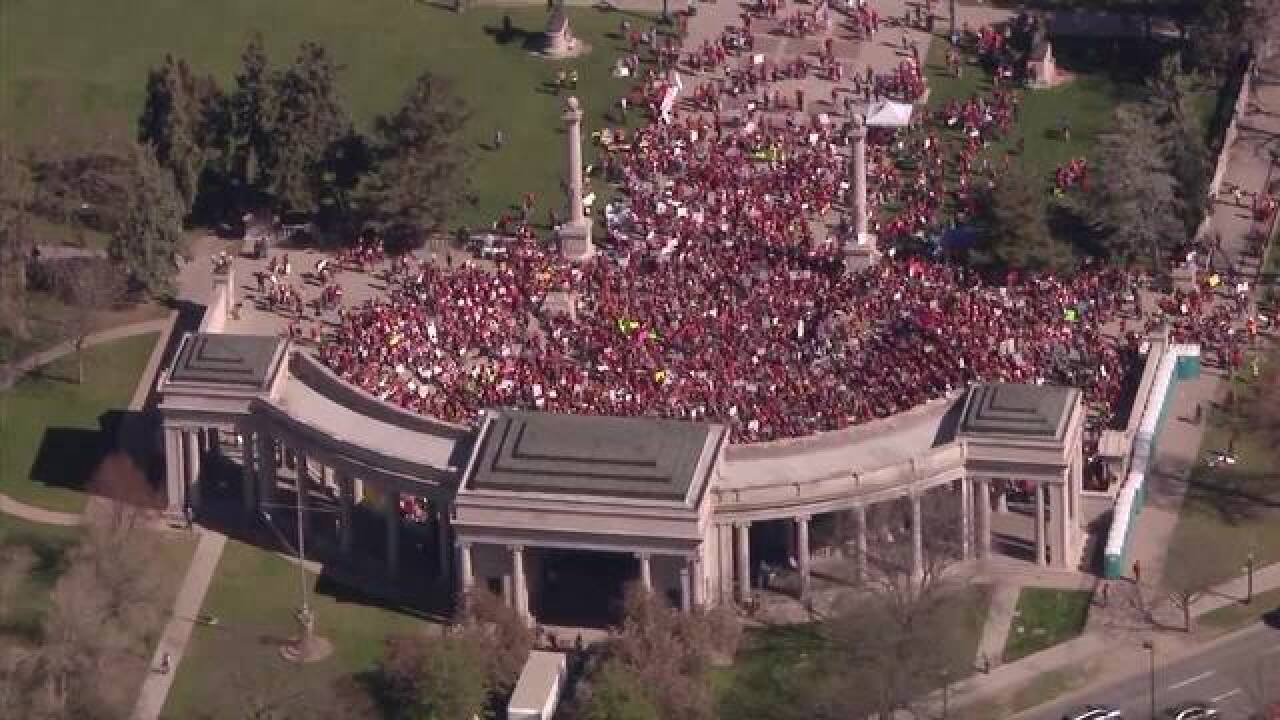 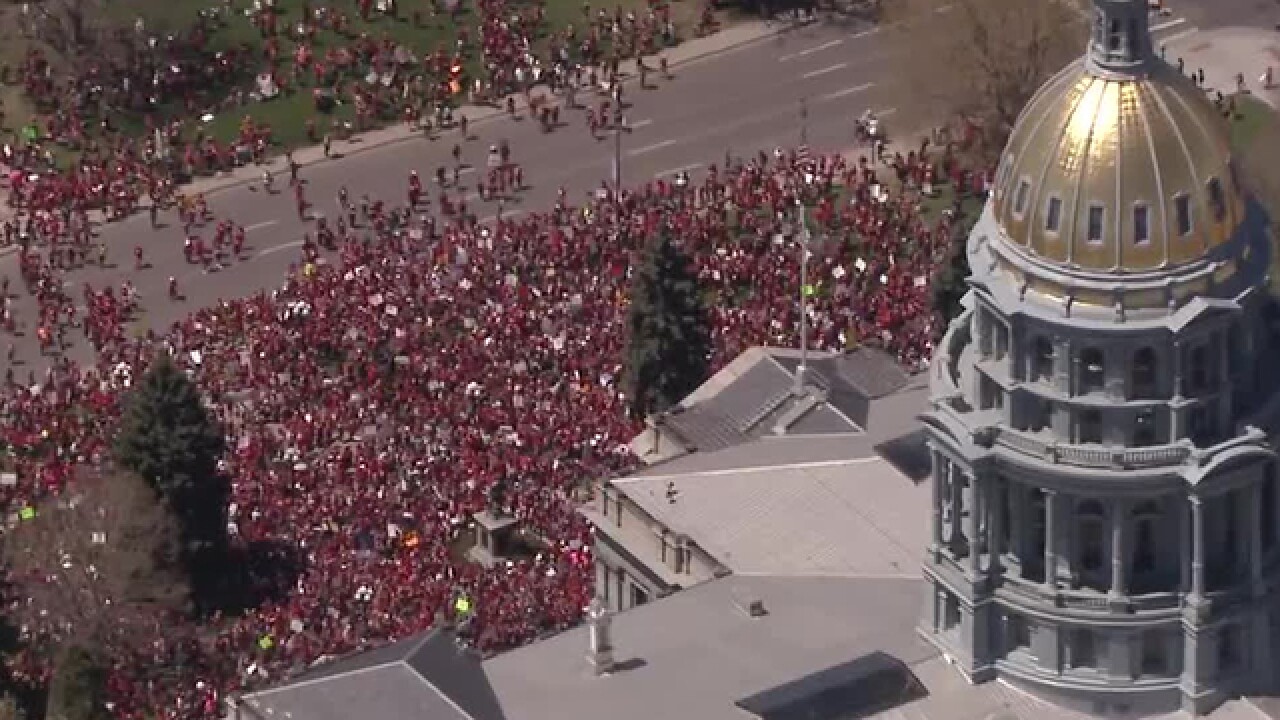 DENVER – Thousands of Colorado teachers gathered at the Capitol building in Denver on Friday for the second day of walkouts and rallies calling for better pay, more school funding and pension reform.

About 2,000 people took part in Thursday’s rally, chanting “Fund our schools!” and meeting with state lawmakers to discuss bills still being hashed out that will make changes to the state’s pension program and what most teachers said is an underfunded K-12 education system in Colorado.

The teachers wore red as part of the #RedforEd campaign that has swept across states like West Virginia, Oklahoma and Arizona – where teachers also were holding rallies Thursday and Friday.

In all, the state’s 10 largest districts will be closed between Thursday and Friday, most of them on Friday. Approximately 502,000 students attend those districts, according to state Department of Education records.

Friday’s events kicked off at 9 a.m. at Civic Center Park. There will be activities planned throughout the day at the Capitol Building. A formal rally happened at 2 p.m. Watch it in the player below.

Near the onset of the day's activities, Denise Hart, a Loveland teacher, said she was most concerned about PERA, class sizes and a lack of school buses in Loveland.

"We need funding for class size, it makes all the difference. I also feel like I pay over $800 a year out of my own pocket to fund things in my classroom to meet the needs of kinds that aren't being funded by the state," she said.

Hart said she was impressed at the large crowd sizes Friday morning.

"This is incredible. It was all we hoped for," Hart said. "It is so uplifting to know that all these voices are standing together for our students and our kids."

Fourth-grader Jay Campbell said he attended the rally with his mom and "a bunch of school teacchers."

He said he was there "so they (teachers) get paid more, because they should."

"They're doing a lot more and they're not getting paid enough," Campbell said.

A Colorado Springs teacher at the rally said she thought teachers felt newly empowered by other teachers and by the support they've received in Colorado.

"They care for our education. They care for us. It's cool they're supporting our schools and what they do for us," said Caleb, one of her students. "Not a lot of kids feel like they're supported enough, or they don't get the care at home they deserve."

Another student, Cayden, said he was out to support his mother and grandmother, who are both teachers.

Chad, whose wife is a preschool and special education teacher and whose children attend Emerald Elementary in Broomfield, said he and his family regularly attend rallies.

"We've gotten used to it the past couple of years -- devoting our time to good causes and whatnot. And this one hits pretty close to home," he said. "It's her livelihood, and they're underpaid, under-respected. So we're out here trying to take care of that."

"I want my mom to have her own retirement house. I don't want her to have to live with me," one of their daughters said. "I love going on field trips, but if there's no funding, we can't go on them. And we learn a lot on the field trips!"

"It's just great to see everyone out here supporting our students. We're really out here for the kids, making a difference for our future," said another teacher. "We want equitable access to education for all ages and all abilities."

"My school is going to a four-day week because of funding cuts next school year," said Cavin Johnson, a sixth-grader at Vikan Middle School in Brighton. "I'm not very happy. I prefer a five-day school week so I'm not getting home late every day."

At the afternoon rally, a host of teachers, activists, lawmakers and students spoke about the need for better school funding across the state. Teachers from each corner of Colorado were on hand, and Sen. Michael Bennet, D-Colo., and former Denver Mayor Wellington Webb were on hand.

The day culminated with overtures to those in attendance to sign onto the petitions for Initiative 93.

"We have to get that through! Make sure you sign that before you leave, if you do nothing else!"

And organizers and speakers implored people at the rally to take the energy back to their local communities and school districts in order to fight for more money on the local level as well.

"Keep fighting! This is the beginning," organizers said as they signed off.

Gov. John Hickenlooper addressed the teachers shortly after 11:30 p.m. and tried to explain what his administration has done to try and pay down the so-called "negative factor" in school funding, which currently sits around $670 million, Hickenlooper said.

"When the state went through the recession...in essence, the state borrowed over $1 billion for education. I know it's not enough. We share that frustration," Hickenlooper said, but he added that he wanted lawmakers to pass plans to pay the negative factor down to zero over the next few years.

"That's still $670 million that you guys are owed," Hickenlooper said, to chants of "Where is it?!"

Hickenlooper said he was working with the state pension system, PERA, to "secure $225 million into PERA every year, year after year."

"We see you. We hear you. We are working with you -- not just today. And I understand that there is debt going back that we are paying down," Hickenlooper said. "We're here to make that commitment as long as we can -- get that negative factor down to zero so you can all keep inspiring the next generation of Coloradans, the next generation of Americans."

Rep. Barbara McLachlan, a southwest Colorado Democrat and retired public school teacher, spoke about the differences rural communities like hers have to deal with when it comes to education versus those in urban Front Range communities.

“Rural communities are a little different. The teachers are paid less. There’s a lower property tax there, so there’s just not enough money for schools,” she said. “It’s further to get place. You can’t just go to a college and take a class. You have do drive to Denver or do it online.”

“And then we don’t have broadband in a lot of place, so you can’t even do online classes,” she continued. “So for somebody like me to be here representing rural schools – we got them $30 million more in the budget, which was fabulous – it just gives them a little bit of a voice, and they need to know that I’m here representing them.”
And she says that she and fellow lawmakers have been listening to the teachers.

McLachlan said she felt the rallies were having an effect.

“I’m so proud of them for getting out here and putting their voice out here. They’re taking time out of their day – a lot of them are taking a day off work and not getting paid for it—and I just respect them, unbelievably so.”

Rep. Paul Rosenthal, D-Denver, who is also an educator, called the teachers “inspiring.”

“I feel like my people are here right now – all the teachers. And I feel, really, a great sense of energy from all of them,” Rosenthal said. “They know as well as I do that we bring students’ lives and experiences with us always – all our lives.”

He agreed that the discussions with the teachers have been productive.

“So much of the messaging is resonating with them…whether you’re a Republican or Democrat, there’s a sense that we can do better, and the teachers in the gallery are definitely responding to that message,” Rosenthal said.

The state budget is expected to be signed next week, which includes billions in education money. There are also several other education-related bills still making their way through the two chambers in the General Assembly, but there are less than two weeks left in this year's session.

Denver7's Connor Wist and Liz Gelardi contributed to this report.