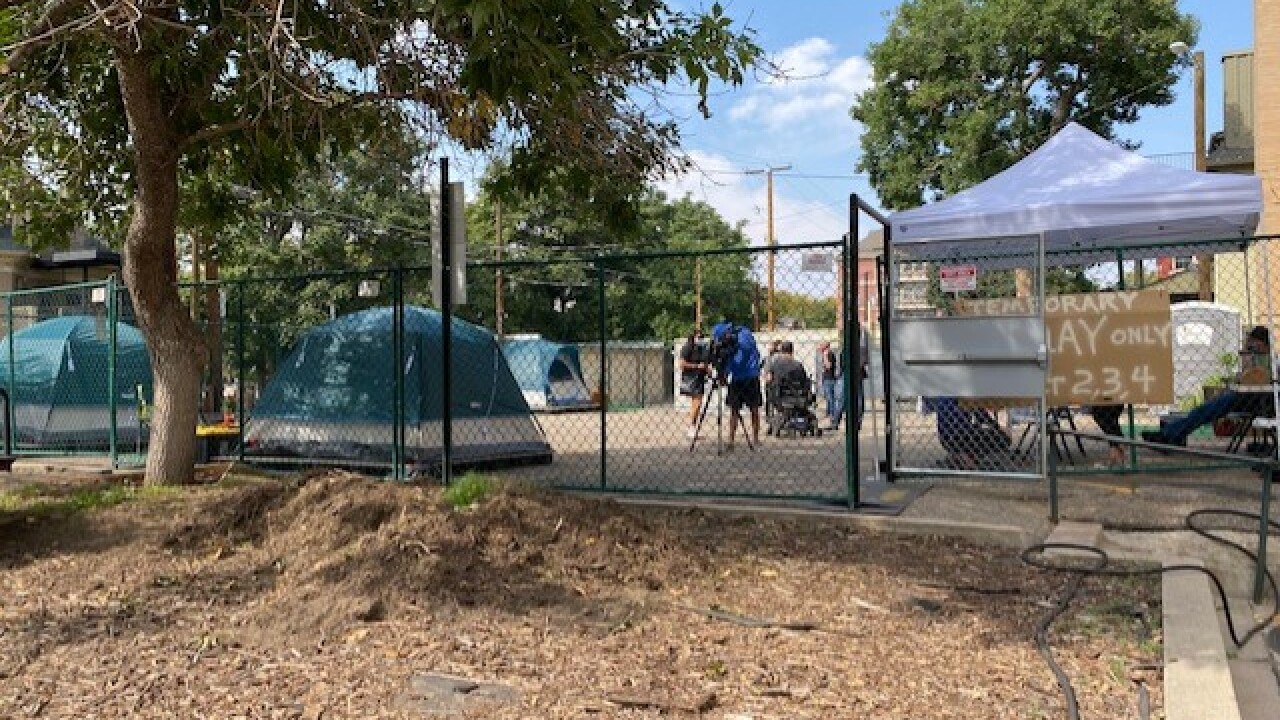 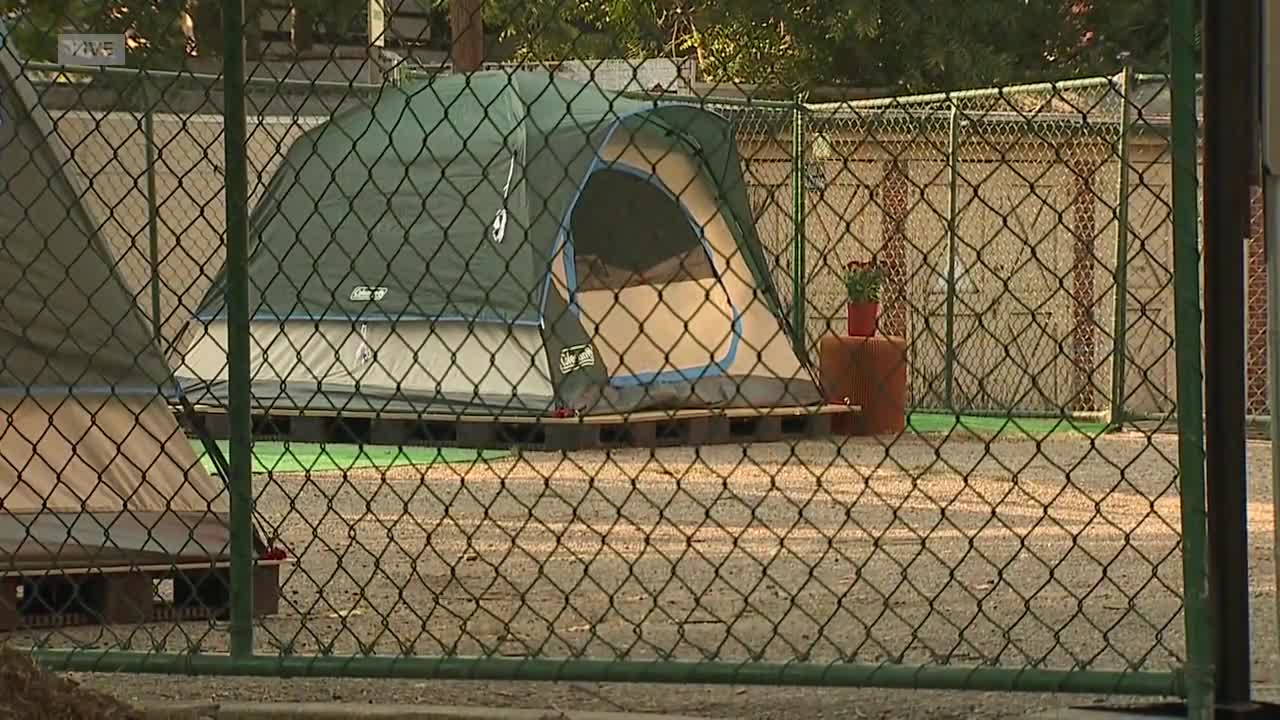 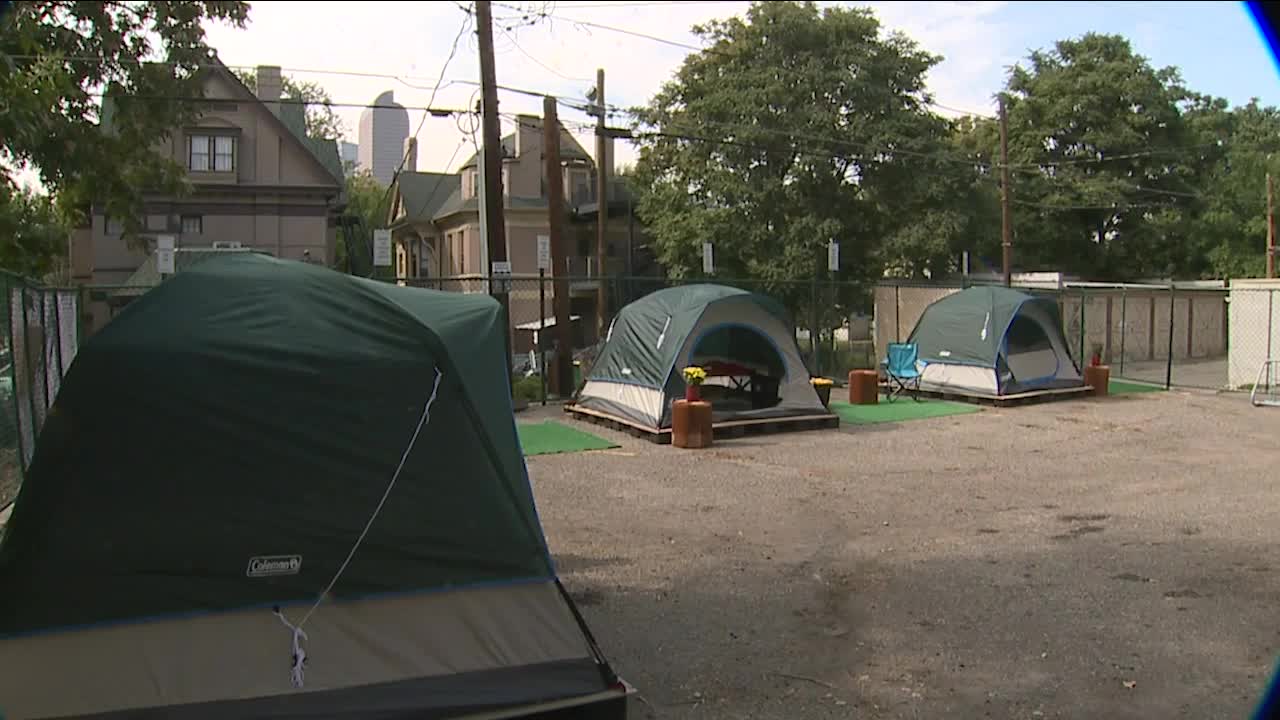 Those have long been the chief complaints about homeless people setting up camp in Denver neighborhoods.

The homeless say they have no where to go.

"People don't like us because we're different, but we're not. We're people too," said Christina Touchstone, one of several people camping next to the Blair Caldwell Library in Five Points.

Touchstone said she'd love to live in a managed camp, "so we could be treated as human beings instead of pieces of trash."

Last month, Denver Mayor Michael Hancock announced on Facebook that the area between the Caldwell Library and Sonny Lawson park was being considered as a location for a Safe Open Space managed camp.

Some neighborhood residents scuttled that plan before any public hearings were held, and before the public could see what the managed camp program was all about.

The Colorado Village Collaborative, Interfaith Alliance and Belong Church then joined together to setup a mock SOS managed camp in the church's parking lot at 16th & Ogden, in North Cap Hill.

"A lot of the problems that people see with the existing encampments wouldn't happen here," said Cole Chandler, the Collaborative's executive director. "We have a place for people to go to the bathroom, and we have a place for them to wash their hands."

He said tents would be spaced farther apart than those in regular homeless camps.

"We're trying to do that in a safe, managed, regulated way that prevents the spread of COVID-19, and delivers resources to the most vulnerable, unsheltered neighbors," he said.

There might even be a mobile shower and laundry facility.

The nonprofit, Showers For All, set up a mobile trailer with two restroom/shower combinations and twin washer/dryers, right next to the church.

"We deeply believe that community matters," said Jennifer Kloeppel of Showers for All.

Chandler said the Collaborative has been tasked with finding multiple locations for managed, supervised campsites. He's not willing to divulge any possible locations yet, because the last location was nixed by hasty opposition, before the Collaborative could conduct remote community meetings.

"We wanted to take a step back from looking at particular locations, and we wanted to engage the entire city," Chandler said.

He said showing an example of what a managed camp will look like will help residents all across the city understand what they're trying to do.

"We want to create this space in a safe, dignified, human way that honors the humanity of all of our neighbors," he said.

Chandler told Denver7 the managed camps would be a "resource rich, service rich environment," that would be supervised 24/7.

When asked if his church would be open to hosting one of the managed camps, Pastor Jasper Peters said, "I hope so."

He said if the neighbors are okay with it, he'd offer his parking lot as one of the locations.

"If there is a way that we can, through a tiny little sacrifice, provide a sense of rest, a sense of belonging for our neighbors, then we would absolutely love the opportunity to do that," he said. "We also want to make a loud and clear statement that people who need rest have a right to rest."

Many residents are still skittish about having any camps, regular or managed, in their neighborhood.

"Uh, I don't know," said Renee Reszczewski, who lives in Five Points. "I don't know what kind of supervision they're looking at."

Roszczewski said she's moving out of the neighborhood because she no longer feels safe.

"The homeless come into the building and just sleep on the stairs and leave trash," she said, adding that she can't walk her dog in the nearby dog park, because she doesn't know what her dog might step in."

"We see overdoses, needles, people urinating and defecating. I'm very upset and angry because we have not been able to use this park," she said.

Brooks Callahan said a managed camp can make a difference.

"It's incredibly important. It makes you feel like a human. I mean, Jesus. Let's be clean," he said.

Callahan, who has lived at the 24th & Welton homeless camp for about seven months, took issue with the Central Baptist Church's opposition to the 'managed camp' proposal next to the Blair Caldwell Library.

He said church's no trespassing signs show a reluctance to help.

"That pisses me off. We have to survive out here, but when people go, 'shoo, shoo, let me just sweep you underneath the fence.' Huh uh," he said.

When asked about Five Points residents' efforts to quash the 'managed camp' proposal in their neighborhood, Callahan said it just raises questions.

He said the complaints neighbors brought forth were about waste, trash and needles.

He said a managed, supervised camp would address those issues, so "is it really about the problem, or is it real about those people?"