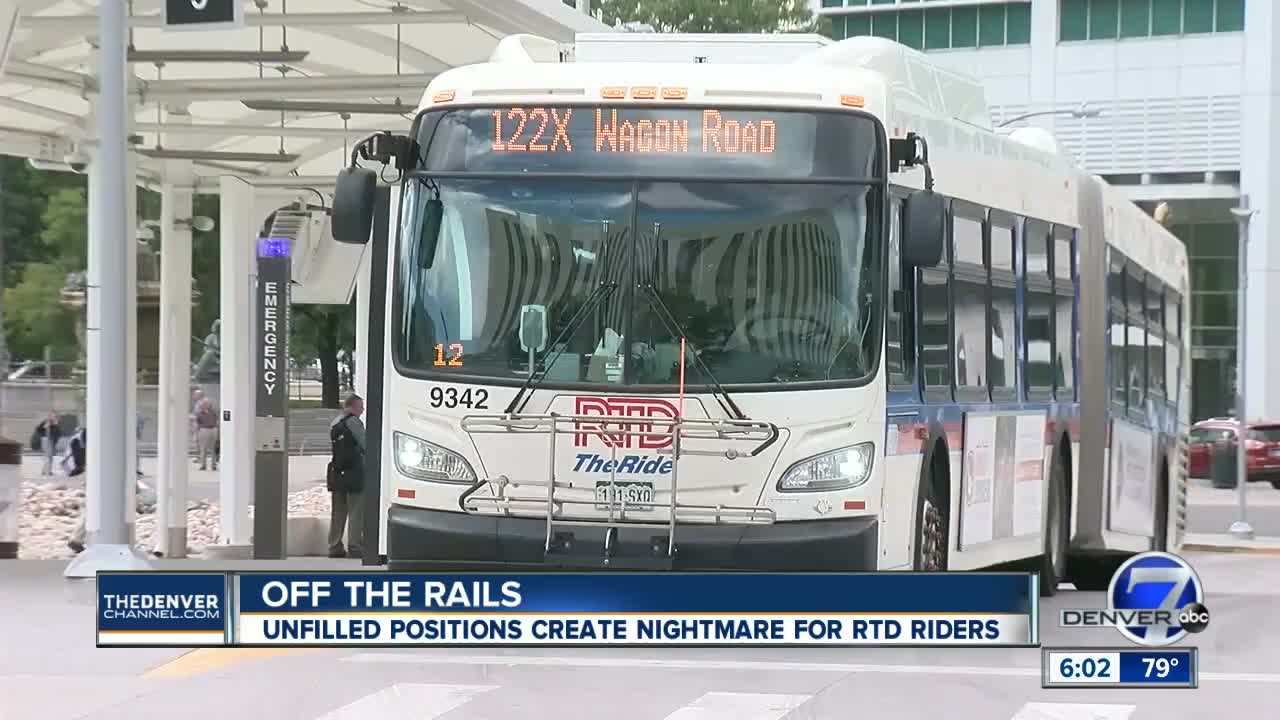 DENVER -- If taking light rail or the bus is supposed to take the headache out of your commute, it’s not exactly easing the pain at the moment.

“We have an operator shortage on the bus side and on the rail side,” said Pauletta Tonilas, assistant general manager of communications for the Regional Transportation District. “And it is impacting service at times.”

RTD says it is short about 80 bus drivers and 50 train operators because of low unemployment, competition from other industries and even drug testing.

“This is just a job skill-set that a lot of people aren’t choosing to move into right now. Not only is this the type of work that a lot of, especially younger people, don't want to do,” Tonilas said. “Some people have a tough time passing the drug test and the background check."

The shortage is causing major disruptions in services.

RTD is sending out notices on a daily basis about service disruptions like this one for the R Line:

Service disruption
Effective: September 10, 2019
Due to manpower issues, the following trips on the R line have been canceled:

“It's not even a heads-up,” said rider Tonya Henderson. “You get the notice at the last minute.”

“They’re not waiting for people,” Henderson said. “They should stay for a minute, so everybody can get on and not just close (the doors) so fast. People get closed in the door.”

"Who are either on the trains or on the buses and their service is not what they think it should be,” Luber said. “They're missing trains and when you miss a train, you could miss work. And that's a problem."

For its part, RTD fully admits it has a critical shortage right now.

“Sometimes that means that we have to drop routes," Tonilas said.

"It is tough because you start off with the shifts that aren't the greatest shifts,” Tonilas said. “But, you move your way up. These are fantastic jobs. They pay very well. You can start out at $20/hour."

Tonilas says RTD is also hiring dozens of skilled mechanics who start at an even higher hourly rate.

“It’s all about keeping good people and then continuing to get people in the door. That is the challenge for us," Tonilas said.

Luber says it boils down to reliability, and if users don’t find it reliable – the problem could get worse before it gets better.

“If you’re not sure if there’s going to be a train there, well then, why are you going to take the train?” Luber said.

“We do the best we can to keep things moving,” Tonilas said. “But obviously, we need the operators to put the service out on the street.”