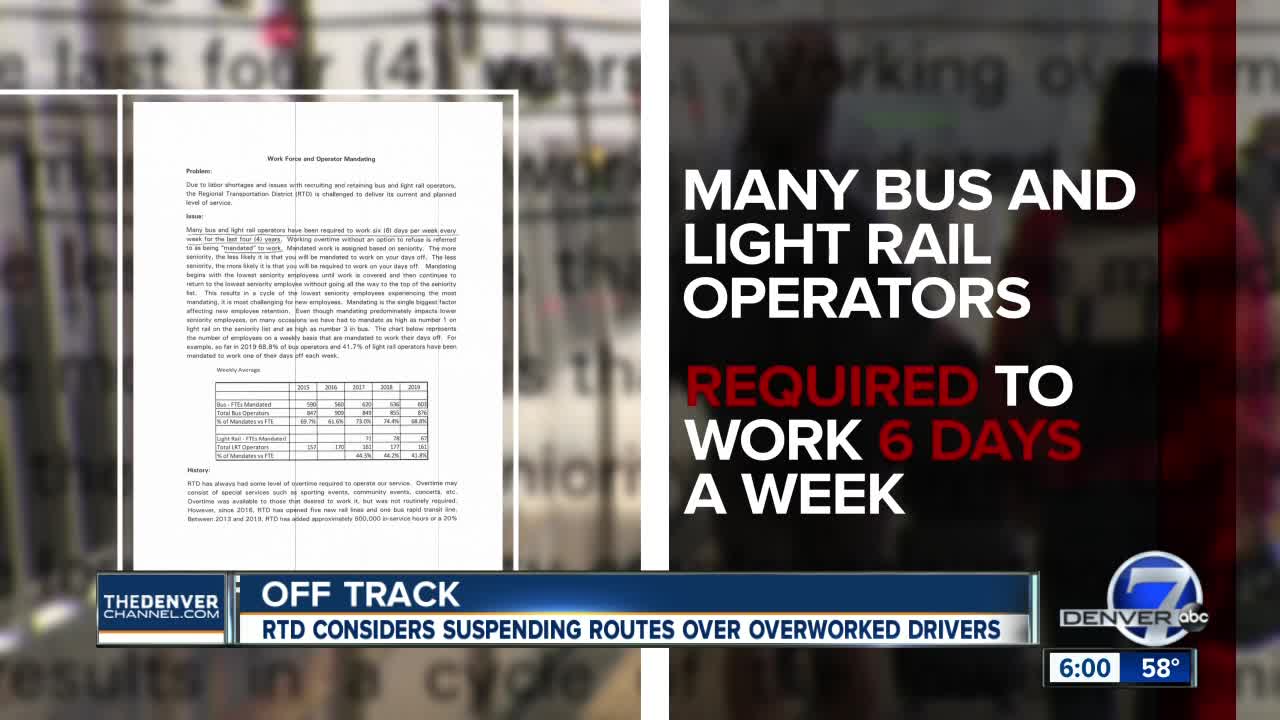 DENVER — The Regional Transportation District board will consider a proposal from RTD staff at a meeting next week to temporarily cut “a significant amount of service” in order to address driver and operator shortages that have led to many newer employees having to work six days a week.

A draft plan would “reduce the need for 58 operators (bus and rail)” as certain routes and services are cut, according to a memo attached to the agenda for next Tuesday’s Operations & Customer Service Committee meeting.

CPR News first reported the possible service cuts and the contents of the memo on Thursday. RTD spokesperson Tina Jacquez told CPR that any cuts would be focused on the least-popular routes and said: “We want to make sure that we’re hopefully proposing an option that the board can look at that would help both.”

RTD again acknowledged the driver and operator shortage in September and said it was leading to service disruptions. On Oct. 1, five of the eight RTD rail lines saw trip impacts and the R Line had 21 cancellations.

But the memo shows how the ongoing “mandated” overtime that newer employees are often being forced to work is affecting driver and operator numbers.

It shows that so far this year, nearly 69% of bus drivers and 42% of light rail operators have been forced to work on their day off. Those numbers are down slightly from 2017 and 2018, however.

RTD operators got raises to nearly $20 an hour last year when the union and RTD came to a three-year agreement, and the base pay will increase to $20.58 for operators in 2020.

The memo says that the new rail lines that have opened since 2016 and decreasing unemployment rates have created the driver and operator shortfalls but that the mandating and other issues are creating a cycle.

“In the last 33 months, we have hired the employee equivalent of 73% of our entire bus operator workforce and 82% of our total train operator workforce,” the memo says. “However, during this same 33 months, RTD has had over 710 bus operators and 201 train operators leave their positions. Although some are related to promotions or retirements, most are leaving for other reasons.”

The memo goes on to say that RTD expects the number of hours taken by operators through Family Medical Leave, sick leave, or on the job injury leave this year to be the highest since 2016.

The memo says that the number of service hours dropped so far this year on buses is likely to pace-out to be fewer than were dropped last year but that light rail dropped service would likely increase after the Southeast Extension opened in May, requiring 20 new operators.

But the memo says that 26 light rail trips were dropped in July and that number increased to 296.5 trips in August.

“Additional steps beyond recruitment and retention needs to be taken to be able to bring relief to our employees and bring service reliability to our customers,” the memo adds in its conclusion section.

The proposal to curtail service temporarily is contained within a section of the memo titled “next steps.”

“Staff is proposing curtailing a significant amount of service for a temporary period in order to bring our service in-line with the amount of operators we have available to run service without as much mandating,” the memo says.

It said that the proposal, if approved by the board, would completely do away with some drivers and operators having to continue working mandated overtime but “would reduce the needs for the same employees to work 6 days every week.”

“A key challenge as we move forward is that we need to be innovative about how we balance our service with workforce availability, so we can provide jobs that are enticing to future employees,” said Michael Ford, RTD’s chief operations officer, in a news release on Friday.

“In addition, this should significantly reduce any dropped service and provide more reliable service on the routes that RTD will be providing,” the memo adds.

The committee is expected to discuss the proposal on Tuesday before finalizing a plan to present at the Nov. 12 board meeting.

“Cutting service isn’t something we want to do. The safety of our system, the best possible customer experience and the well-being of our employees are at the forefront of our decision-making. Based on current conditions, reducing service will enhance our ability to do this,” said Dave Jensen, RTD’s assistant general manager of rail operations. “It is our hope that this is a temporary measure that will allow us to get to a healthier place from an operations perspective and begin to build our service back up.”