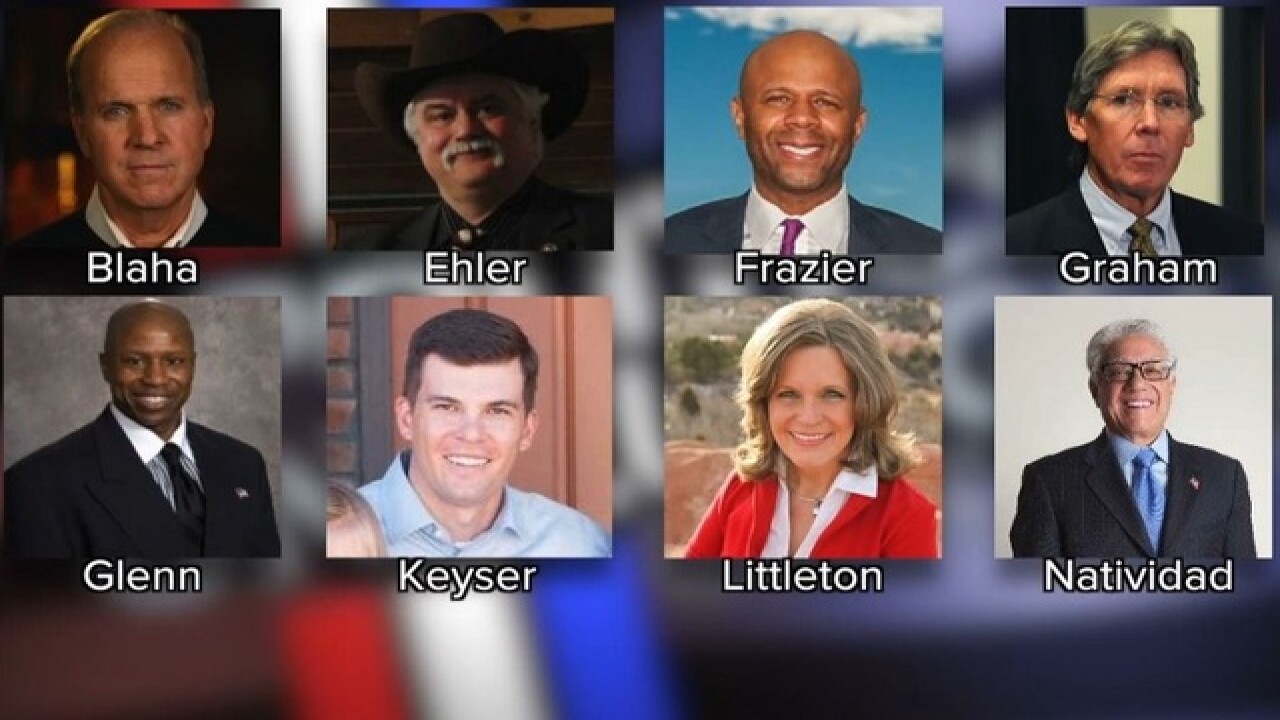 The forum was moderated by Jimmy Sengenberger from KNUS 710 AM and live streamed by Denver7.

The candidates answered questions for almost three hours. It took nearly two hours and 20 minutes before any of the candidates mentioned any of the remaining Republican presidential candidates. Littleton said the name, "Trump" which was followed by the most interesting moment, when the candidates seemed to dodge the question asking if they support Donald Trump, Ted Cruz or John Kasich.

"Anyone besides a criminal or a socialist," said Littleton, making a veiled reference to Democratic candidates Hillary Clinton and Bernie Sanders.

Keyser also referenced any candidate not under federal investigation.

"I don't think Kasich is in the game, so I think he's out of the game, so it's either Cruz or it's Trump," said Graham.

"Any and all actually. Any of these candidates will be better than Hillary (Clinton) or Bernie Sanders," said Natividad.

"The Republican. Now to expand on that, I have concerns about all three," said Glenn.

"Whoever our candidate is, go look ourselves in the mirror and get over it when it's time, and stand up and get a Republican President of the United States of America," said Blaha.

The candidates were also asked how to attract Hispanic voters and address immigration reform.

Two of the answers were able to incorporate all voters.

"Having to micro-target a particular group is not in our best strategy and you will not win that way," said Glenn.

Keyser gave same of his answer in Spanish and then said, "I think Michael Bennet speaks French."

Blaha introduced himself to the voters in the room by summing up his platform like a "T.B.D. - To Be Done" list at home.

Glenn told voters that funding the Department of Defense is what sets him apart from the other candidates, referencing the need for military realignment and base closure review.

Keyser referenced his experience as former special ops in the military.

"I know this enemy because I've seen them up close, I've looked them in the eye and they've killed my friends," said Keyser.

"There is no bigger physical threat to global security than a nuclear, capable Iran," he continued.

The field will be narrowed after the April 9 Republican State Convention at the Broadmoor World Arena in Colorado Springs.

A candidate must secure at least 30% of the delegate votes at the convention to make it on the primary ballot in June.

They can petition to be on the ballot. However, those signatures are due by April 4.

Jack Graham, the former athletic director at Colorado State University, submitted his petitions to the Colorado Secretary of State on Monday, March 28.

Blaha, Keyser, Rosier and Frazier submitted a format for petitions and were collecting signatures.

At the forum, Ehler, Littleton, Natividad and Glenn said they were going to try to qualify for the ballot at the convention.