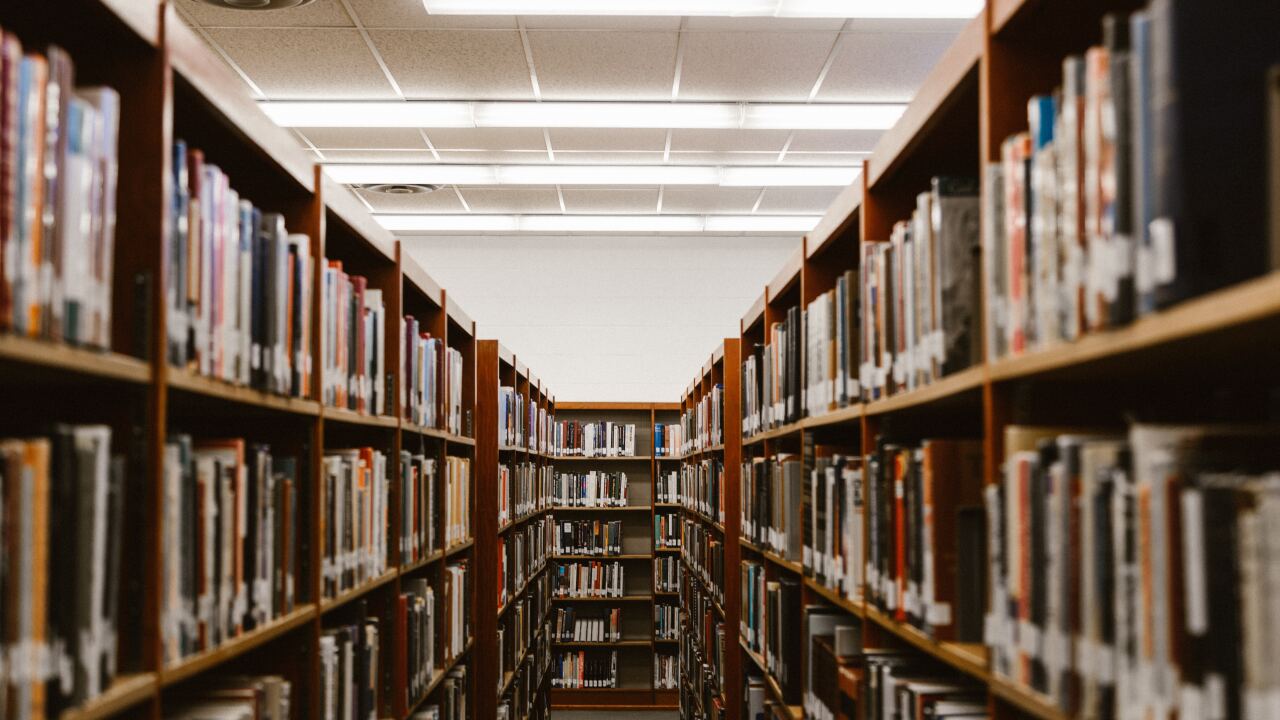 Denver (AP) — After a long day of class registration and orientation, Dayle “Sammy” Davidson dropped by Red Rocks Community College’s cafeteria for a bite to eat. Tucked inside a warm building where he could rest — the growls in his stomach momentarily tamed — Davidson’s eyelids grew heavy, and he nodded off.

The 59-year-old slept for hours, the quiet and seclusion a welcome break from the downtown Denver homeless shelter he rests in at night. He was discovered by a startled custodian long past the Lakewood campus’s 10 p.m. closing time, but smoothed things by explaining he was a prospective student who made an honest mistake.

“I’m glad they didn’t bar me from campus,” Davidson said while hugging his black dachshund sidekick Little Sammy. “It would be really nice to sleep in a nice bed. A warm, nice bed. But I just am thankful to God for what I got so far.”

Among Davidson’s meager possessions is a will to learn. He’s soon to be part of the shadow population of college students without consistent roofs over their heads working toward degrees in an effort to change the trajectory of their lives.

In Colorado, it’s unclear exactly how many college students are trying to do their homework without a stable home, The Denver Post reports. Some institutions and national organizations survey students about housing and food insecurity, but the numbers are self-reported with many students never filling out the information.

Red Rocks Community College’s most accurate count of its homeless students — 46 in 2019 — came from financial aid data that only accounted for students younger than 24 years old. For comparison, in 2017, Red Rocks enrolled more than 7,000 students, but 2,451 of them were older than 24.

Yet the plight is so evident at Red Rocks that the college is in the process of partnering with The Action Center — a Jefferson County nonprofit organization that offers food, clothing and housing help to those in need — to establish a shelter to house about a dozen students.

“This population of students is far greater than you would imagine,” said Stephanie Studebaker, a Red Rocks Community College employee and liaison between the school and The Action Center.

Christy Baker-Smith, managing director and director of research for Temple University’s Hope Center, said the changing demographics of college students is one reason why students are pursuing degrees even if they’re without homes.

“The people who go to college today are very different than those who attended college 50 years ago,” Baker-Smith said.

About 20% of U.S. college students are parents, Baker-Smith said. More immigrants, first-generation students, LGBTQ people and members of marginalized communities are seeking higher education than in years past. Financial aid doesn’t stretch as far when a student is caring for a child or an aging family member, Baker-Smith said. Sometimes, LGBTQ students get kicked out of their homes when they come out to their parents and have trouble filling out financial aid forms. Some students age out of the foster care system and are left without guidance.

Tuition at public two-year institutions in Colorado also rose by 52% from 2008 to 2018, now costing $4,470 per year on average. At public four-year institutions during the same time frame, tuition climbed 68% to an average of $11,130 per year, according to a report from the Colorado Department of Higher Education.

“There are people navigating homelessness in order to pursue a degree because they know it will improve their lives and the lives of their children,” Baker-Smith said. “It is a social benefit to make sure that people who are already this resilient have some support because they’re working multiple jobs, living in their car and understand the value of a degree, which is something our society values. It would be a mistake not to support and empower them.”

Higher education professionals may not have exact numbers illustrating how many of their students are experiencing homelessness, but they recognize the glaring signs: hygiene problems when a shower is hard to come by; security reporting students bundled in blankets asleep in their cars in campus parking lots; campus food banks picked over.

“These people are coming to me because they want to make their life better,” Red Rocks’ Studebaker said. “They want to get trained for a job so they can put food on the table or a roof over their head.”

Studebaker spends part of her shift at The Action Center, talking up Red Rocks’ programs with those who are struggling or homeless. She helps prospective students with their FAFSA — Free Application for Federal Student Aid — forms and ensures they have their GED certificate or high school equivalency documents in order.

Because he lacks high school transcripts, Davidson needs to take his GED tests again in order to start classes in the spring. He told Studebaker he completed some community college in California years ago, but his transcripts are on microfiche — out of his budget and capability to obtain now.

“People can’t wrap their heads around this population being so large because they think about their own path and don’t think about the help given to them along the way and the safety nets they had in place,” Studebaker said. “The greatest misconception about homeless, low-income population is that these people are lazy. There is nothing that could be further from the truth.”

Fatima Kiass found the financial aid application to be one of the tallest hurdles in her pursuit of a degree while homeless and lacking the parental information needed to apply for federal financial aid.

As a child, Kiass bounced around shelters for domestic violence victims with her mother, eventually becoming emancipated after feeling like a burden on her mom’s tight budget. Kiass couch-surfed with friends until she moved into her dorm at the University of Northern Colorado in Greeley in 2010.

Kiass transferred to Metropolitan State University of Denver in 2013, sleeping in her car while she studied sociology and human services.

“People don’t get what it’s like,” Kiass said. “I would get kicked out of Starbucks or the library would close or I didn’t have enough gas to go park where I needed to. I needed a place to study. I had all my clothes in my trunk. I needed space for my school books and my papers. I needed space to be a student.”

Despite the daily struggles, Kiass graduated with a 4.0 grade-point average in 2015.

“It was always instilled in me that education is my ticket to freedom and to escape the struggle,” Kiass said. “I needed to have to have this piece of paper, my degree, to say I am worthy.”

Urban Peak, the only nonprofit organization in Denver providing services for youth ages 15 to 24 who are experiencing homelessness, helped Kiass find an apartment in Capitol Hill and get back on her feet while attending MSU Denver.

Now, Kiass works as an outreach case manager at Urban Peak, helping homeless youth. She’s arranged her diploma to be among the first thing she sees when she wakes up.

“It shows me how badass I am,” Kiass said. “This was the hardest thing I’ve ever had to do in my life, and I didn’t know what I was doing and, looking back, I didn’t really do that bad.”

There are existing resources at colleges across Colorado, including food pantries available for hungry students. MSU Denver has a pilot program in development for a food truck offering products like meat, milk, eggs, fruit, vegetables, baby food and canned goods to those in need. The University of Colorado Boulder offers free emergency food boxes for students in need. At Colorado State University, a Housing Navigator program provides “housing counseling services,” particularly for those having a hard time finding stable housing.

Tables of free food dot the Red Rocks campus, spilling over with bread, condiments and canned goods. The community college has a special room where students are free to rest.

“It’s full all day, every day,” said Terri Cedillo, who works in the college’s financial aid office. “Probably most of the students in there don’t have somewhere to go during the day.”

Davidson saves up for public transportation from his Denver homeless shelter to Red Rocks Community College, where he spends most of his time in the school library designing guitars. He pulled a folder out of his backpack with stacks of his drawings inside — some stained with coffee, but all intricate and neat.

Davidson hopes to take Red Rocks’ lutherie classes so he can learn to design his beloved guitars and, eventually, open his own guitar business.

His dreams seem far away.

Davidson wonders if he’ll be able to get his GED certification in the wake of the 2012 stroke that left him with nerve damage in addition to the painful rheumatoid arthritis he suffers from. He doesn’t know if he’d be eligible for the first cohort of students housed in the homeless shelter being planned by Red Rocks and The Action Center.

In November, Red Rocks administrators, Davidson and Little Sammy met in a conference room, discussing the logistics of opening and sustaining the shelter. They need more funding to keep the space open long-term, officials agreed. They were still working out potential criteria students would need to apply and talked about how to staff the place.

“I do believe once this gets started, it’s not going to be long before we have more students applying than space,” said Laurie Walowitz, director of programs at The Action Center. “For those that we have to turn away, we need to try to find alternatives. There’s not a lot. We know this because we wouldn’t be doing this now if there were.”

Walowitz and the Red Rocks crew tossed around ideas for shelter names — something friendly and not off-putting.

Someone suggested “The Launch Pad” and Davidson smiled.

“Something that makes you feel secure so you can focus on learning and go from there,” he said. “I like that. That sounds nice.”