Rattlesnakes minus the rattle: Why you won’t hear that distinctive sound from some Colorado snakes 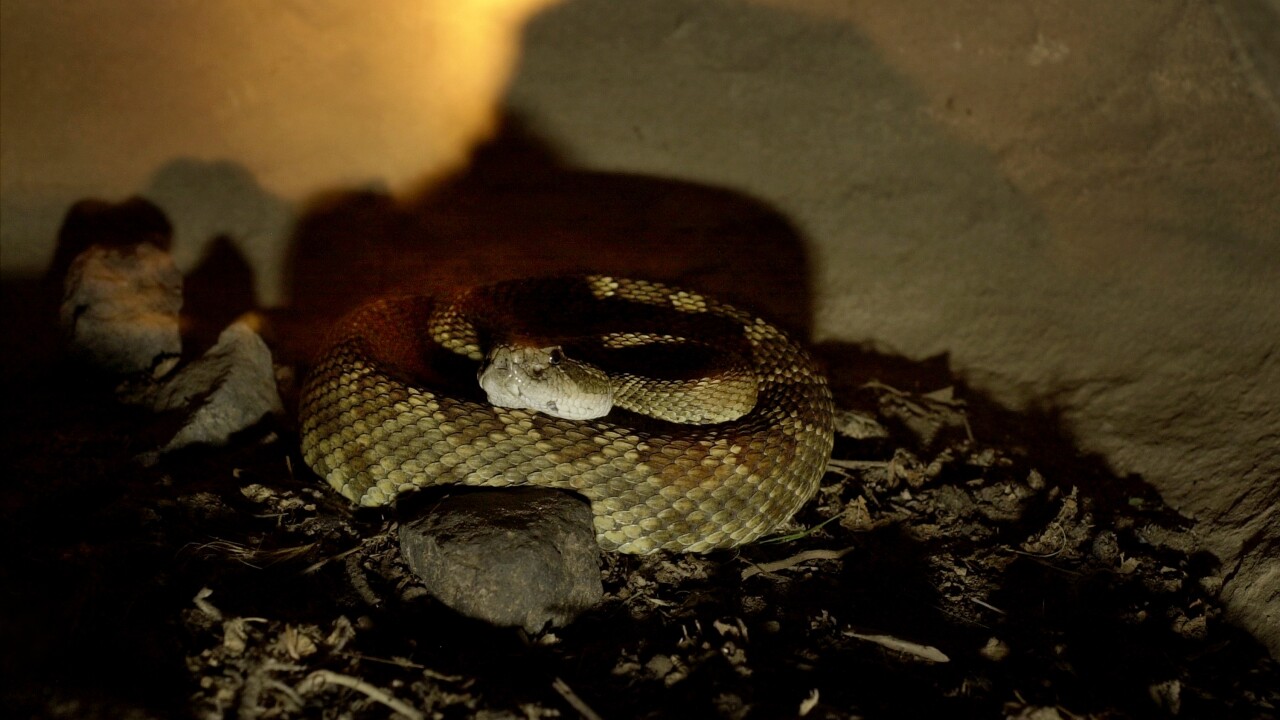 David McNew/Getty Images
390303 23: A Western rattlesnake curls up in an a rock alcove at Painted Rock, a sacred site to the native Chumash people, in the Carrizo Plain National Monument, May 31, 2001. President Bill Clinton established the national monument in his final days in office to save the last large remnant of the aboriginal ocean of grassland that once covered central California. In late March, President George W. Bush announced his intention to review the Carrizo with an eye toward opening the monument to oil exploration. (Photo by David McNew/Getty Images)

DENVER — There's an implied, biological agreement between humans and rattlesnakes: If we get too close to one, it will rattle at you. It's a clear, audible sign to back off.

But what happens when they don't use the rattle? Why do some rattlesnakes not offer up this distinctive warning? Are they choosing not to, or is there a deeper genetic issue at hand?

There are several reasons why one of these snakes may not rattle at you if you stumble upon it, said Jason Clay with Colorado Parks and Wildlife. Here are some reasons these snakes may stay silent.

If you come across a rattlesnake that doesn’t rattle its tail at you, first look at its size.

Does it look relatively small? It may be a juvenile that has not yet developed its rattle, Clay said. These baby snakes will need to shed their skin a few times before their rattle is usable. While they're young, they will likely opt for hissing and coiling to fend off a threat.

Because snakes are ectothermic (cold-blooded), they rely on the sun’s warmth to warm their bodies. They cannot regulate their body temperature like mammals or other warm-blooded animals.

Because they rely on their environment for heat, a cool day or shaded area may make a snake sluggish.

Should you run into a rattlesnake in those conditions, and if you're not perceived as a danger to it, it may not move — or rattle its tail — simply to conserve energy.

While a bone-chilling sound, the rattles are not life-proof. It’s actually a fragile part of their bodies — it's made of keratin, the same material as fingernails — and can be lost relatively easily.

“It is not uncommon to find snakes with some or all of their namesake rattle broken or missing,” Clay said.

They can be lost in fights with other animals or damaged while slithering around their environment.

A rattlesnake with a missing rattle would have a blunt end to its tail, rather than a continuation of its body to a gradual point. Any snake with a sharply pointed tail is not a rattlesnake. And in Colorado, that means it’s not venomous, Clay said.

Are snakes genetically starting to lose their rattles?

No, or at least not here in Colorado. But there is some indication this could be happening elsewhere.

According to a 2013 NPR report, researchers in South Dakota have found a growing number of prairie rattlesnakes with atrophied tail muscles. While some researchers believe this is a genetic issue, others say it could be an evolutionary development to avoid detection, according to the report.

Head southwest to an island in the Gulf of California and you'd find the only rattlesnake in the world that has completely lost its rattle. According to a 2016 National Geographic report, the rare Santa Catalina rattlesnake evolved to lose its rattle, possibly after living in a place where it didn't need to warn ungulates of its presence.

Is it actually a rattlesnake?

Colorado is home to two species of rattlesnakes: the western/prairie rattlesnake and the massasauga.

The latter is only found in the southeastern plains in dry grasslands and sandhills below 5,500 feet in elevation. It’s usually about 20 inches long, multiple shades of brown with a loosely checkered pattern.

The western rattlesnake is much more widespread in the state and has been spotted as high as 9,000 feet in elevation. They are typically larger, with an average length of 3 feet, and vary in color from red to brown to gray.

Neither snake is considered aggressive, according to CPW, but both will defend themselves if they feel threatened.

A quick way to note if a snake is in fact a rattlesnake, aside from looking at its tail for a rattle (or blunt end if it has lost it), is to look at its head. Is it large and triangular? That is needed for the large venom glands on the outside of a snake’s upper jaw, and in Colorado, would indicate it is a rattlesnake.

Another hint is a thick, heavy body, according to CPW, and vertical pupils, but if you can see its eyes, you’re likely within striking distance.

Snakes that are slender, quick or have more stream-lined bodies are typically not venomous.

Why don’t they move off trail quickly?

So, you’ve come across a rattlesnake on the trail and stopped to give it space. It’s not agitated by your presence, but it’s also not moving off the trail very fast. Is it not afraid of you?

Rattlesnakes, unlike many other snake species, are not built for speed. If you’ve lived along the Front Range and spend time outdoors, you’ve likely seen the common bull snake and how fast they slither away when you come upon them. But rattlesnakes are different. They wait for their prey, sometimes for hours or even days, in the same location.

Their larger bodies are built to conserve and store energy for these long waits — not for quick exits.

This often means they have to stand their ground when threatened, so they likely won't rush out of your way.

What to do if you run into a rattlesnake

Rattlesnakes’ initial line of defense is camouflage. Their scales help them blend into the brown and tan brush and rocky outcrops that they often call home. This coloring serves as protection from predators, like hawks, coyotes and other snakes.

Should the animal become threatened, it will use its rattle. It often sounds like a dry, high-pitched buzzing.

However, if the rattlesnake does not have a rattle or if the threat is persistent, it will utilize its second-to-last resort for defense: the “S” coil. This stance is named as such because the snake will elevate its head and part of its body into a S-shaped coil and inflate its body to appear as large as possible. It will often hiss.

Clay said a snake in this position is highly agitated and should not be approached.

The last resort? Strike. Snakes will only do this if they perceive mortal danger and rattlesnakes rarely come to this point, according to CPW. They need their venom to survive — it’s how they kill their prey — so about a third of all rattlesnake bites are dry.