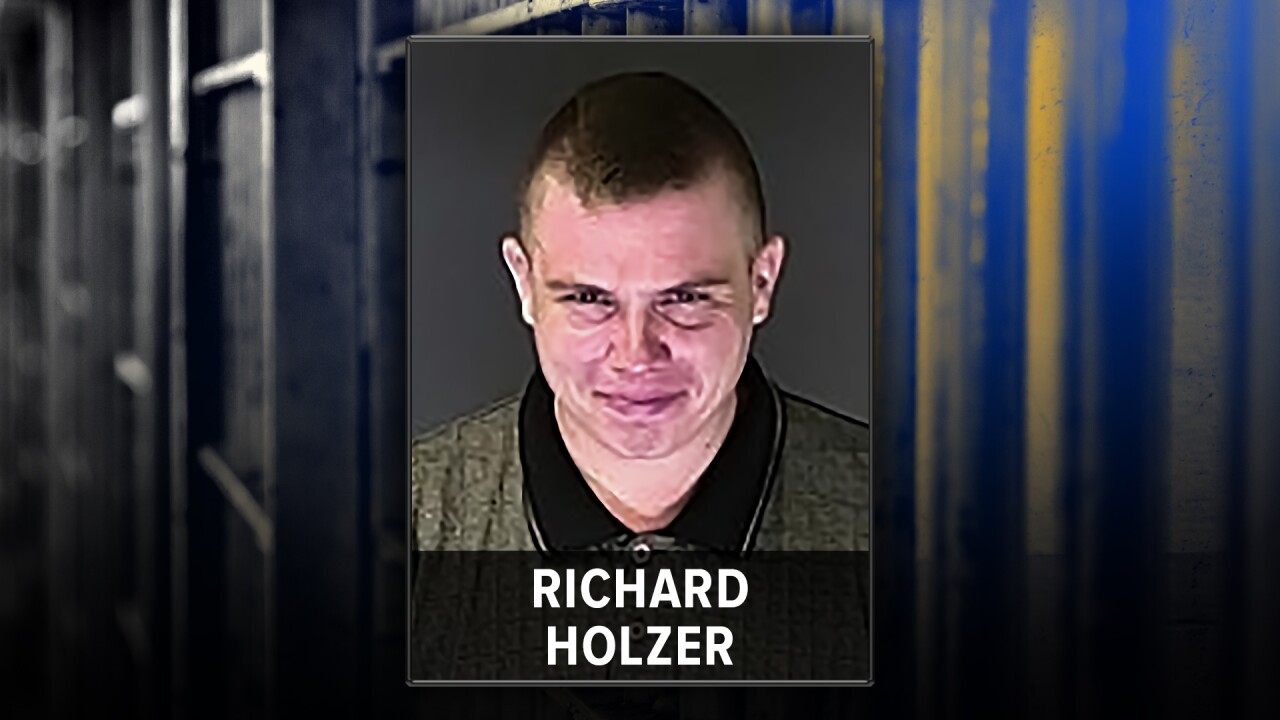 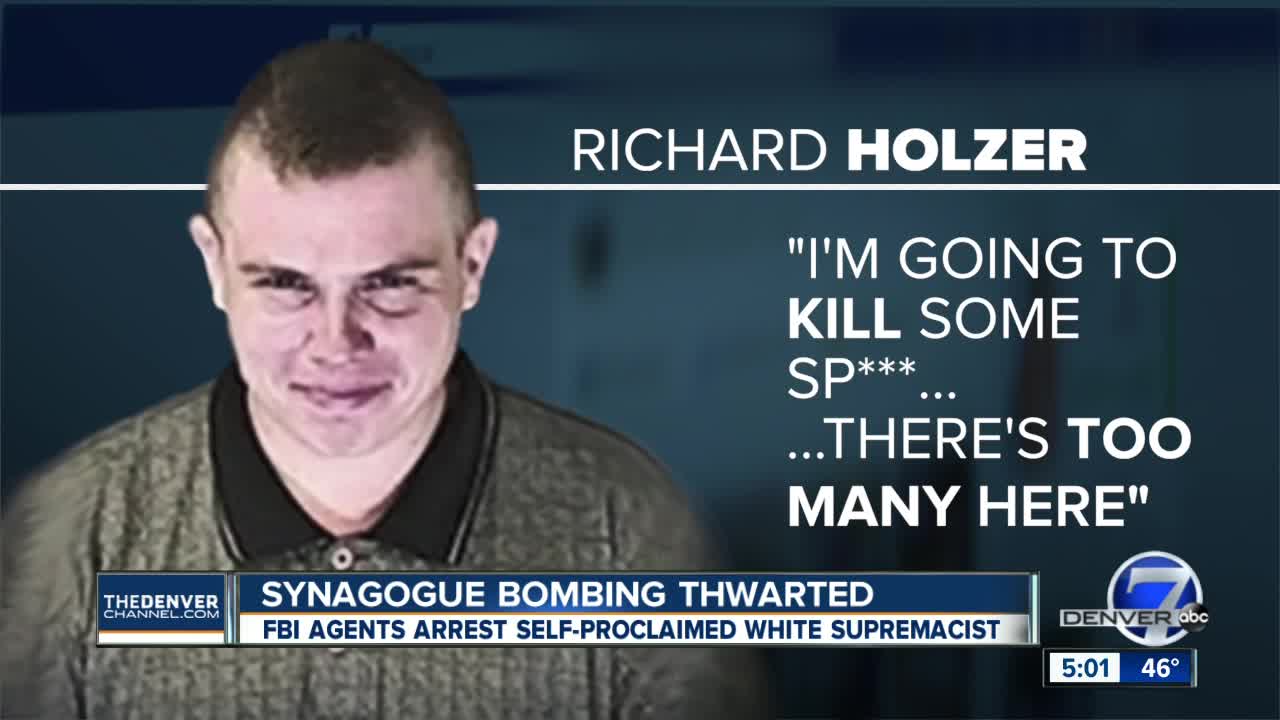 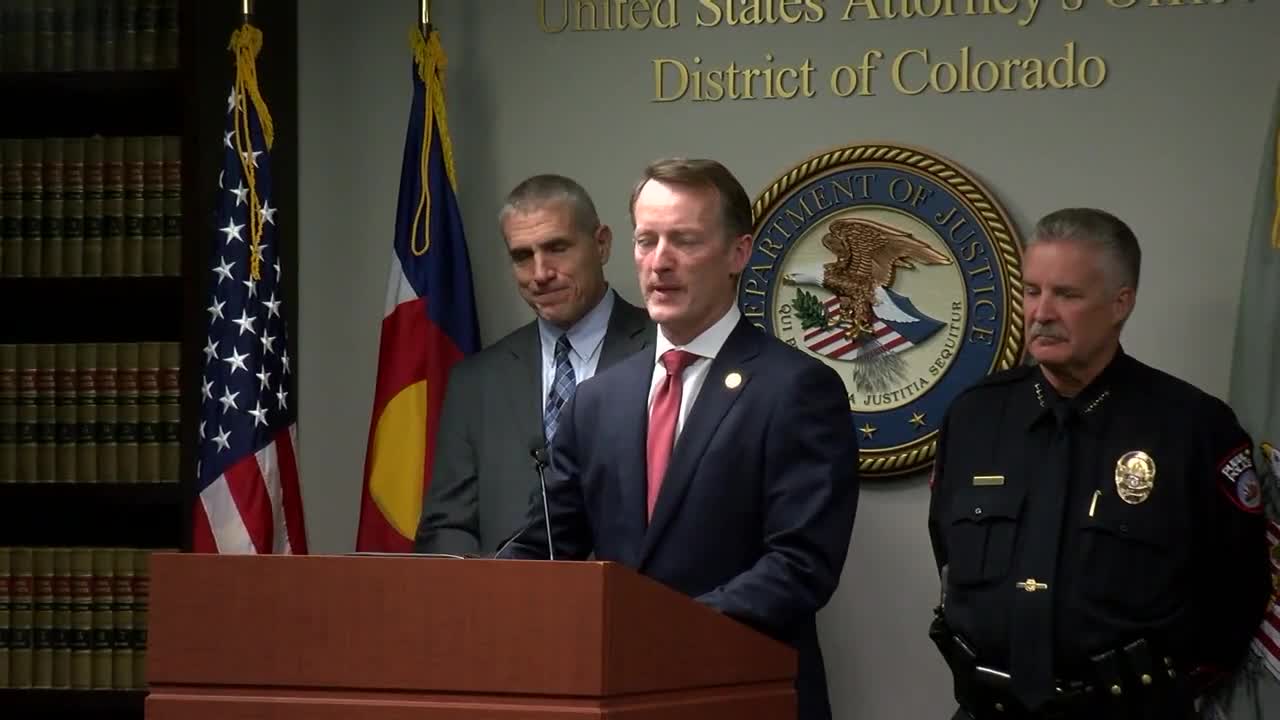 DENVER – A white supremacist from Pueblo was arrested Friday when he met up with three undercover FBI agents in an attempt to bomb the Temple Emanuel synagogue in Pueblo as part of what he called a “racial holy war” and to wipe the synagogue “off the map” in what the FBI says amounts to “domestic terrorism.”

Richard Holzer, 27, made his first court appearance at 2 p.m. Monday at the U.S. District Court of Colorado. Court records show he faces one count of attempting to obstruct religious exercise by force using explosives and fire.

According to a criminal complaint, undercover FBI agents had been talking with Holzer since September and had been tracking multiple Facebook accounts of his in which he talked to other white supremacists through private messages about attacking Jewish people and other minority groups.

Among the messages he wrote was one in which he said, “I wish the Holocaust really did happen,” and another in which he said he was getting ready to shoot people while showing pictures of him holding guns and white supremacist regalia.

In late September, a covert FBI employee contacted Holzer pretending to be a white woman interested in white supremacy. Holzer told the undercover employee he was a former Ku Klux Klan member and a skinhead.

According to the complaint, he told the undercover employees he’d gone after a pedophile and sent the employee pictures of himself with firearms and other skinheads.

He also told the undercover employee that he had hired a man to “hex and poison” the synagogue a year earlier, on Oct. 31, 2018, with arsenic in the water pipes.

In early October, according to the complaint, he told the employee he was going to “scope out” Temple Emanuel and to “see if any ants come out of the HILL.” Included in that message were pictures of him with Nazi propaganda, knives and masks. He also filmed videos outside the synagogue showing people actively there, and said he wanted to poison it again this Oct. 31.

The employee told Holzer they had friends coming to town who might be interested in meeting, and he told the employee he intended to “[g]o out with a final act for the movement,” the complaint says.

On Oct. 12, he talked with another undercover FBI agent and they arranged an in-person meeting.

On Oct. 17, Holzer and a friend met with three undercover FBI agents at a Colorado Springs restaurant. Holzer brought along white supremacy paraphernalia as gifts, the complaint says, and “repeatedly expressed his hatred of Jewish people.” He said he wanted to poison the synagogue to “make them know they’re not wanted here,” according to the complaint.

He went on to mention other ways to “vandalize the place beyond repair” and started discussing bombs. “I’m as down as everybody else is . . . I want something that tells them they are not welcome in this town. Better get the f--- out, otherwise, people will die,” he said, according to the complaint.

Holzer, his friend and the three agents then drove to Temple Emanuel, where they discussed using pipe bombs for more effectiveness. He said, “Let’s get that place off the map,” according to the complaint. The five then took a picture of themselves holding a white supremacy flag at a nearby park.

Holzer again visited the synagogue on Oct. 19, according to a video he sent one of the undercover officers.

“He also explained that the attack on the Synagogue would be ‘phase two’ and that ‘phase three’ would be outside of Pueblo and ‘bigger and better,’” the complaint states.

Four days later, one of the undercover agents sent Holzer pictures showing what appeared to be pipe bombs, to which Holzer responded, “Sieg Heil brothers.”

Holzer then met with the undercover agent on Oct. 31 – last Thursday. They agreed to meet, along with the other undercover agents, at a motel on the night of Nov. 1 to check the explosives before going to the synagogue. He also said that he did not think anyone would be there when the explosives were set off, but that he also “would not care because they would be Jews,” the complaint states.

They met up with the two other undercover agents on last Friday evening, Nov. 1. The complaint says that Holzer had a Nazi arm band, a knife, a mask and a copy of Mein Kampf. The two undercover agents showed him what appeared to be two pipe bombs and two bundles of dynamite, though they were spoofs delivered by the FBI office in Quantico, Va. Holzer called the explosives “absolutely gorgeous,” the complaint says, and they planned to attack the synagogue at 2:30 or 3 a.m. on Saturday.

But the agents instead arrested Holzer and brought him to a police station, where he agreed to speak with agents, the complaint says. It says he admitted he had been planning to blow up the synagogue that night, referring to the plan as “my mountain” and to the synagogue and Jewish community as a “cancer.”

“Although Holzer stated that he had not planned to hurt anyone, when asked what he would have done if there had been someone inside the synagogue when he arrived that night, he admitted that he would have gone through with the attack because anyone inside would be Jewish,” the complaint says.

At Holzer's 2 p.m. court appearance, the judge read the charge against him and said Holzer would be held without bond pending his next court appearance, which is set for Nov. 7. Holzer appeared in court wearing a polo shirt, black pants and black boots and did not speak other than to answer the judge's questions. The court learned that Holzer had been working at a King Soopers store in Pueblo

Holzer asked that a public defender be appointed for him during Monday's hearing.

All three praised their offices' combined work to protect Puebloans and the Jewish community there. Phillips said that authorities "do not believe there is any remaining public safety threat to the Colorado area" and said this case represented the FBI's and Department of Justice's commitments to working with local partners to thwart domestic terrorism before it happens.

Davenport called Pueblo a "diverse community" that was "characterized by inclusiveness and not these kind of behaviors" and said that Pueblo was a "safer place today" because of the joint efforts. He called Holzer's alleged behavior "intolerable."

Should Holzer be convicted of the charges he faces, he could receive up to 20 years in prison and a fine of up to $250,000. He will be held in federal custody while the case is pending.

The Anti-Defamation League says this is the 13th time a white supremacist has been arrested for allegedly plotting attacks against the Jewish community since the Tree of Life synagogue shooting in Pittsburgh.