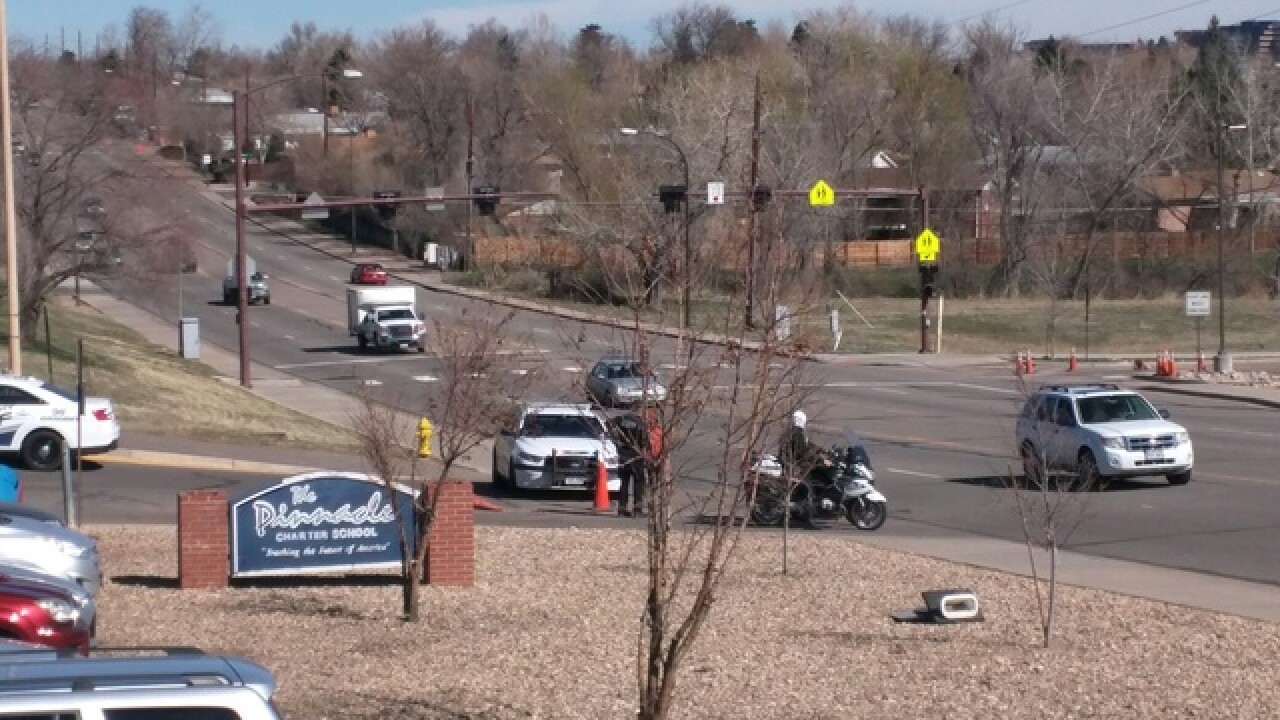 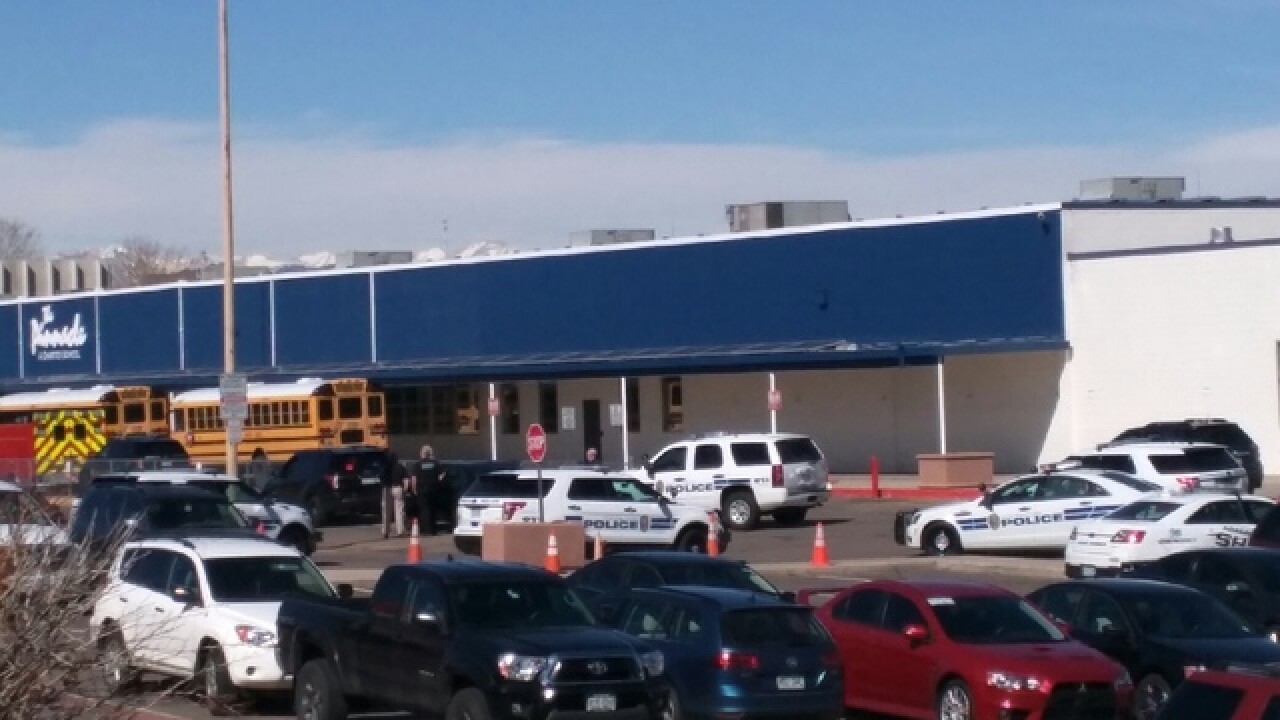 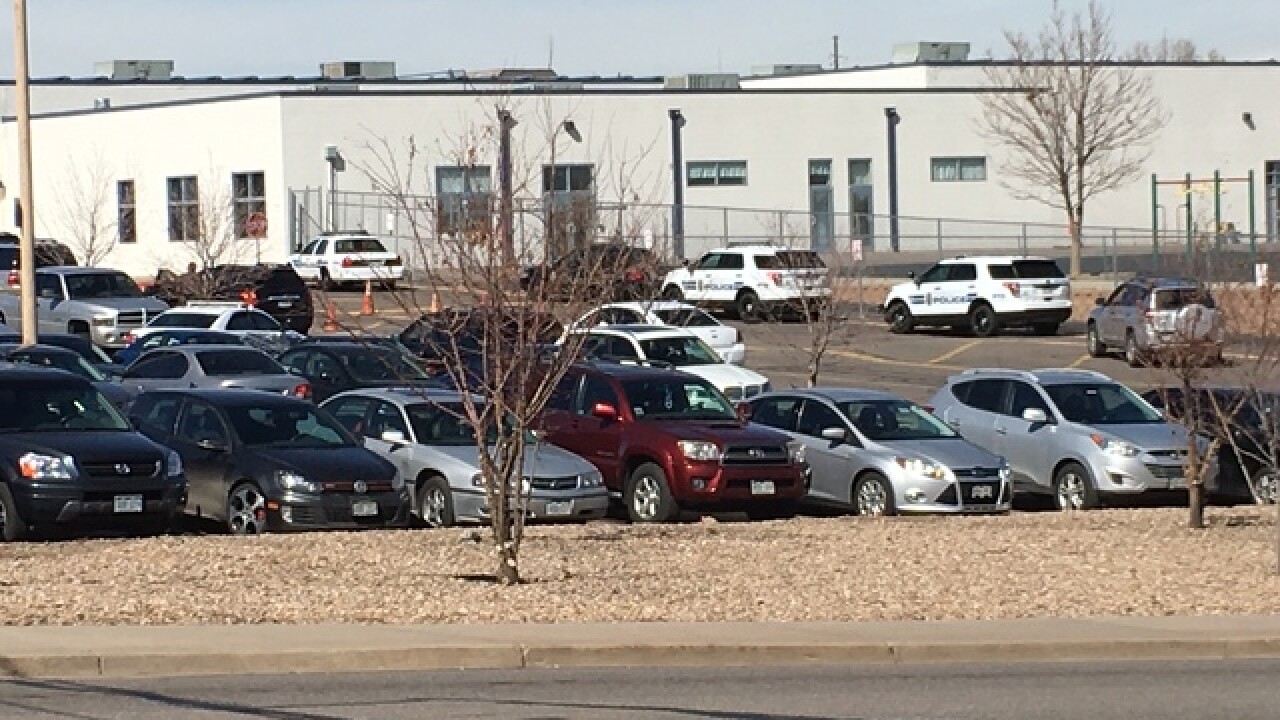 Anxious parents have picked up children who were evacuated from Pinnacle Charter School this afternoon, hours after the school was placed on lockdown, following a report of a person with a gun on campus.

More than a dozen buses lined up to take the students to Water World, so they could be reunited with their parents.

Police searched the school, at West 84th Avenue and Huron Street in Federal Heights, but found no gunman.

“I was on my way over here for my son’s field trip and I received a call letting me know there was a lockdown,” said Melissa Mejia.  “They pretty much said parents shouldn’t come to the school, they should let law enforcement handle it.”

But Mejia said that was easier said than done.

She and dozens of other parents gathered in the parking lots of businesses adjacent to school and waited for word on what was going on.

“This is the second time it’s happened,” said parent Anna Munoz. “About a year ago, it was a guy and a gun and they ended up catching him in the Cricket Store.”

The Federal Heights Police Department said at 9:40 a.m., an officer saw a blue BMW in the parking lot that matched the description of a suspect's vehicle linked to a stabbing in Westminster.

Several schools were then placed on “lockout,” meaning no one could enter the buildings.

Shortly after that, an anonymous caller reported seeing a person with a gun in the school.

The schools were then placed on lockdown.

Police showed up in large numbers, did a general search of Pinnacle Charter School and found no one with a gun.  They then started searching individual rooms, evacuating students room by room.

The students were taken to the Gym/Auditorium building.

“Everyone is okay,” said Craig Pierce, the school’s assistant principal. “There are no injuries. We’ve got not threat in the building.”

When asked about an ambulance that was on scene and a stretcher that was taken into the school, Pierce said a student had suffered an anxiety attack.  He reiterated that no one was hurt.

School says one student suffered anxiety, but no one was injured. Ambulance on standby. pic.twitter.com/43EeGVwe2P

Students were put on buses and taken to Water World at West 88th and Pecos around 12:10 p.m., the Adams County Sheriff's Office said.

Some parents expressed anger over the long wait to learn what happened and to be reunited with kids.

Some parents mad about the long wait to pick up kids.

“I can’t believe this happened one parent,” one parent said.

Another parent said he was grateful it ended the way it did, without anyone getting hurt.

“I think I’m going to take the rest of the day off and just spend it with my son,” the visibly shaken father told Denver7.

Exactly one year ago, a man with a revolver ran through Pinnacle Charter School's auditorium, prompting a lockdown.

Police searched the area and eventually finding the man outside a store at 84th Avenue and Pecos Street.

Surveillance video from a local Cricket Wireless store on 84th Avenue showed the suspect being confronted by a Federal Heights Police officer. The two got into a scuffle and the man ran out of the store. When he was arrested at the other end of the parking lot, police said they confiscated a .22-caliber revolver.

Back in 2014, teachers at the school were trained to deal with an armed intruder on campus.