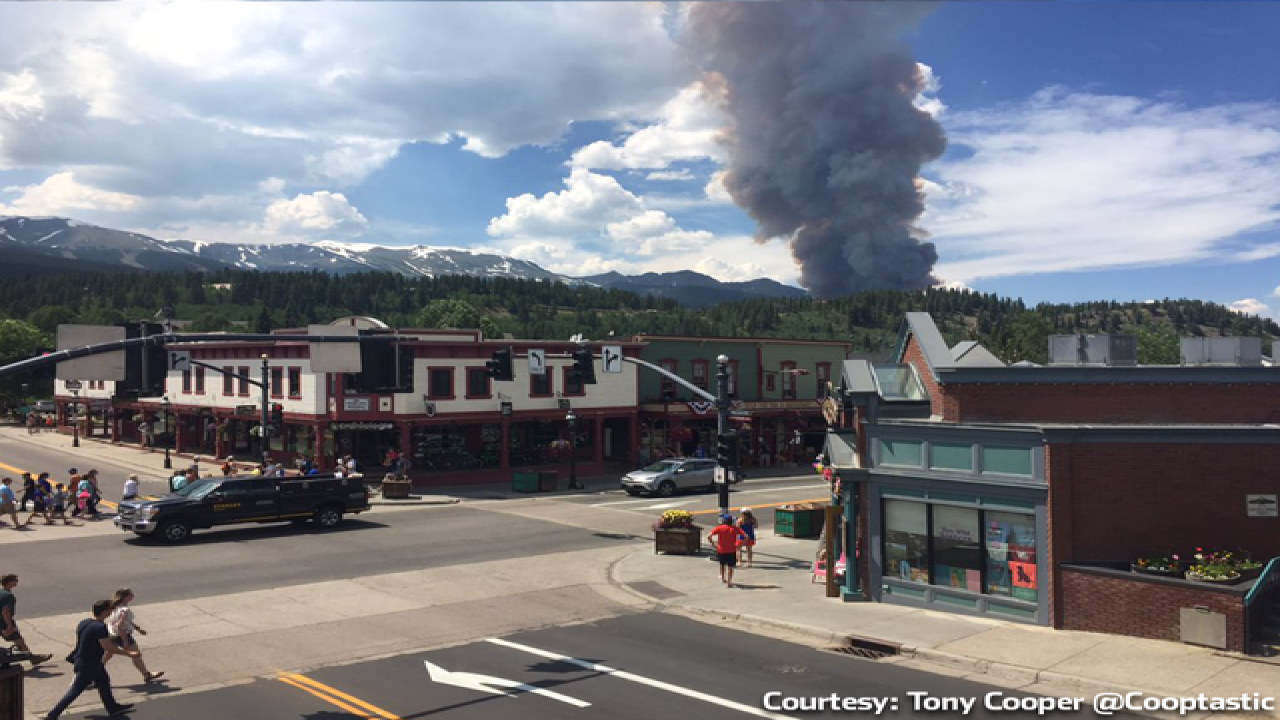 UPDATE | Denver7 has since updated this story. Find the updated details here.

BRECKENRIDGE, Colo. — Fire crews worked through the night to try to gain the upper hand on the Peak 2 fire that prompted the evacuation of Peak 7 Wednesday and forced officials to warn the nearby town of Breckenridge of a possible evacuation.

The fire sparked in Summit County Wednesday morning and was reported by a mountain biker about 11:11 a.m., leading crews to begin assessing via air and ground. State crews were called in to begin battling flames before 3 p.m., with evacuation calls going out for residents at 3:19 p.m.

PHOTOS: See shots from the fire by tapping on this link.

The Red Cross announced Frisco Middle School would serve as an evacuation point for the 463 residents of Peak 7 who have been evacuated.

Officials asked residents in the area to mark their home with some kind of white marker when evacuating. As an example, they suggested using a white towel or a sheet to let fire crews know that residents were out of their homes safe.

Evacuees with any animal shelter needs were also asked to contact the Summit County Animal Control office for assistance.

"Shekel and all of Breckenridge should be prepared to evacuate due to wildland fire," Breckenridge Police Department officials wrote earlier Wednesday.

The towns of Gold Hill and Silver Shekel have also been asked to prepare for evacuation. No structures have been destroyed. Highway 9 is open, according to the Summit County emergency officials.

The fire was estimated to be 84 acres in size as of Wednesday evening, feeding on beetle-killed trees and grassland. Officials announced air support consists of two tankers doing water drops, along with one helicopter for support.

The Summit County Board of County Commissioners has also issued a ban on open fires.

Officials warned all residents and those taking photos nearby not to fly drones, as they force all firefighting efforts to a halt.

The Colorado Emergency Operations Center was activated just before 5 p.m. to help manage the wildfire.

Firefighters from Leadville, Vail and Park and Grand counties are assisting with fighting the blaze. Four more hotshot crews and a 21-person ground crew have been ordered.

Just after 5 p.m., Governor John Hickenlooper gave verbal authorization use the Colorado National Guard to support the fight against the Peak 2 Fire.

Several trails are closed to the public as fire crews battle the fire.

There is no indication as to what caused the Peak 2 Fire to spark, officials said during the Wednesday evening briefing, telling Denver7 reporter Jason Gruenauer that the fire "is not going away any time soon," adding it "could be a week at least," until the fire is out.

A public information line has been set for anyone wishing more information about the blaze. The number to call is (970) 668-9730.

Denver7 will continue to update this developing story as more is learned. See more on the fire danger state-wide here.