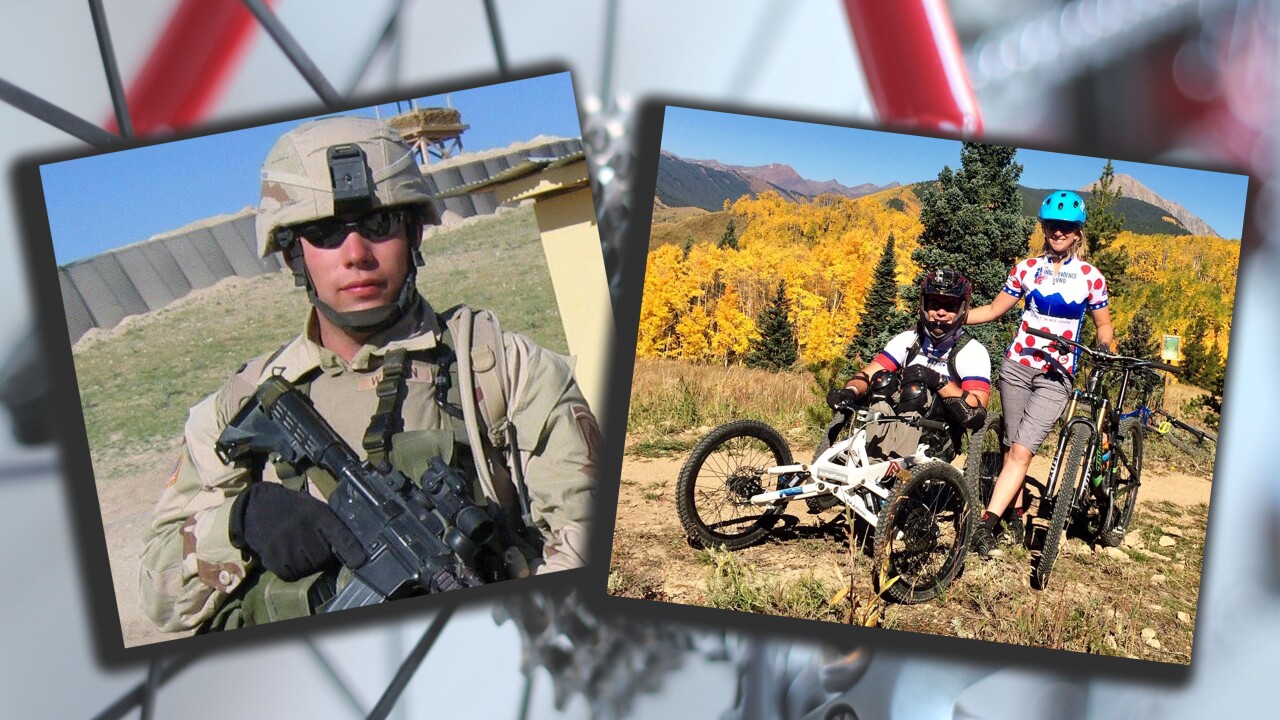 GOLDEN, Colo. — In 2014, for the first time in almost a decade, Tyler Wilson found himself back on Colorado’s mountain trails, a place he had longed to return to since his paralysis.

It was a little different than his previous experiences on the trails — he was on a bike with three wheels that was closer to the ground and powered by his arms, back and core strength — but that sense of freedom was the same that he remembered from his time exploring the backcountry as a kid growing up in Colorado.

“You get that independence back,” he said.

Tyler felt called to join the military as an airborne infantryman after the terrorist attack on Sept. 11, 2001. He was assigned to the 173rd Airborne Brigade in Italy, where he spent a year and a half before he was deployed to Afghanistan.

In the spring of 2005, he was deployed to the country’s Zabul province after a group of American scouts had been ambushed in a remote valley. Tyler was on the machine gun team, providing cover as others moved into the valley.

“Once we got there, we realized that we kicked over the hornets’ nest and it was a lot bigger than we first realized,” Tyler said.

For some time, it was going well. But then the Taliban force struck back.

“(They) got up on the ridgelines around our position and were shooting directly onto us,” Tyler remembered. “That’s when I was hit four times by the Taliban machine guns and squadmates of mine rescued me and pulled me to safety and started first aid on me. And then I was med-evac’ed.”

The first bullet had lodged in his spine, instantly paralyzing him.

“That was the end of my time in the military,” he said.

Back at home in Colorado, his recovery process started, both mentally and physically. He was young, only 20 years old, and now a veteran and paraplegic in a wheelchair. He said for a while he wandered through life not quite sure what to do with his new normal.

“I was really young — really just getting my military career started and then it was abruptly ended,” he said. “Your whole life is upended with that and then with this new spinal cord injury and everything.”

About eight years later, in 2013, he faced his reality head-on and decided he was going to make change. He acknowledged that he wasn’t happy, had gained weight, and had become stuck in a negative mindset. Knowing he was the only one who could make a change, he sought help from a rehab therapist who specialized in adaptive sports.

At the time, she was working with veterans with disabilities to help them improve their physical abilities and reengage them in sports, fitness and the outdoor recreation.

One of Tyler’s goals with rehab was to return to outdoor recreation and redefine himself post-injury. At 28 years old, he was eager to get back in the mountains somehow, but didn’t know what was available to him.

Luckily, that was Crystal’s specialty.

He was introduced to road handcycling in 2013. During that learning process, he made a comment about missing Colorado’s trails.

“And I looked at him and I was like, ‘Wait, what do you mean you can’t get out on the trails anymore?’” Crystal said. “And Tyler can attest to this — the one thing you never say to me is ‘I can’t’ and I will sure as heck help find you a way.”

Crystal was no stranger to mountain biking — it’s one of her biggest passions.

In 2014, she had just started a mountain handcycling program with plans to take a few wounded veterans to try it in the mountains of Crested Butte. That visit was a success and Tyler ended up joining the therapy program for a week in the town, working with a local adaptative sports center named Adaptive Sports Center. He tried a handcycle from bike manufacturer ReActive Adaptation, also based in Crested Butte, and found a perfect fit. He ended up purchasing one for himself.

It was a little awkward at first, Tyler remembered, but as he slowly became accustomed to it, he realized just how much was now available for him to explore.

“You can access a lot of things you don’t think you can,” he said.

That includes deep in the backcountry.

“You’re no longer stuck to those little paved nature trails and things like that,” Tyler said. “You can actually get to some pretty gnarly terrain. And the bikes themselves are advancing like crazy over the years. Now they have an e-assist system, especially for higher injury — quadriplegics and stuff — that are able to go a lot farther than they once were able to.”

“And so Tyler can keep up with our 3-year-old,” Crystal added, smiling.

Their firstborn son, now 3, is named after Tyler’s squad leader and the medic, Sgt. Matthew Blaskowski, who saved him in Afghanistan.

Blaskowski was also wounded during the May 3, 2005 attack but survived. On his following deployment in 2007, he was killed, Crystal said. Five children have been named after him, including the Wilsons’ son, Tyler said.

“So he has quite the legacy of little kids right now,” he said.

The Wilsons’ youngest son, who is 1, is named after one of Tyler’s squadmates and Crystal’s grandfather.

Tyler said he never wanted to sit on the sidelines while the rest of the family went out to explore the state’s trails.

“I want to be right there next to them and try to keep up with the 3-year-old on his bike,” he said. “It’s amazing how much he can give me a run for my money already. I’m scared for what it’s going to be like in a few years. That’s the biggest thing — we’re able to make those memories as a family and together and not just bits and pieces here or there. I’m right there next to them and able to do it too.”

Every now and then, he needs a nudge or boost if the handcycle’s back wheel needs traction, but the bike is able to handle most terrain, even in technical areas.

Crystal said she is thrilled he’s able to join her and the boys on those trails.

“I love mountain biking because it allows you to be in your own head, out in nature, away from the hustle and bustle, and it really allows you to be free in a way that you can’t do on a road bike,” she said. “To be able to give that opportunity and see Tyler — because of this equipment — have access to that same feeling of freedom is amazing.”

Nowadays, the family hits the trails together about two or three times a week, depending on their schedules. They count themselves lucky to call Colorado home, where so many of the outdoor spaces are accessible to disabled individuals.

“Colorado really, really, really does a phenomenal job at tailoring their trails and outdoor spaces to make it accessible for anyone and everyone that has a desire to get out there,” Crystal said. “That’s the reason we’re never leaving.”

Tyler said he felt hard-pressed to think of a local trail that wasn’t doable for him.

“Colorado does a phenomenal job with taking accessibility and people disabilities into consideration with their trail planning and families, just in general,” he said. “I’m so fortunate to grow up in this state and have the access that we do here.”

The COVID-19 pandemic has thrown in some extra challenges when it comes to outdoor recreation, but the Wilsons said they are still finding joy in staying active together outside.