Paige: Bad news for the Broncos as offense, defense regress against Raiders 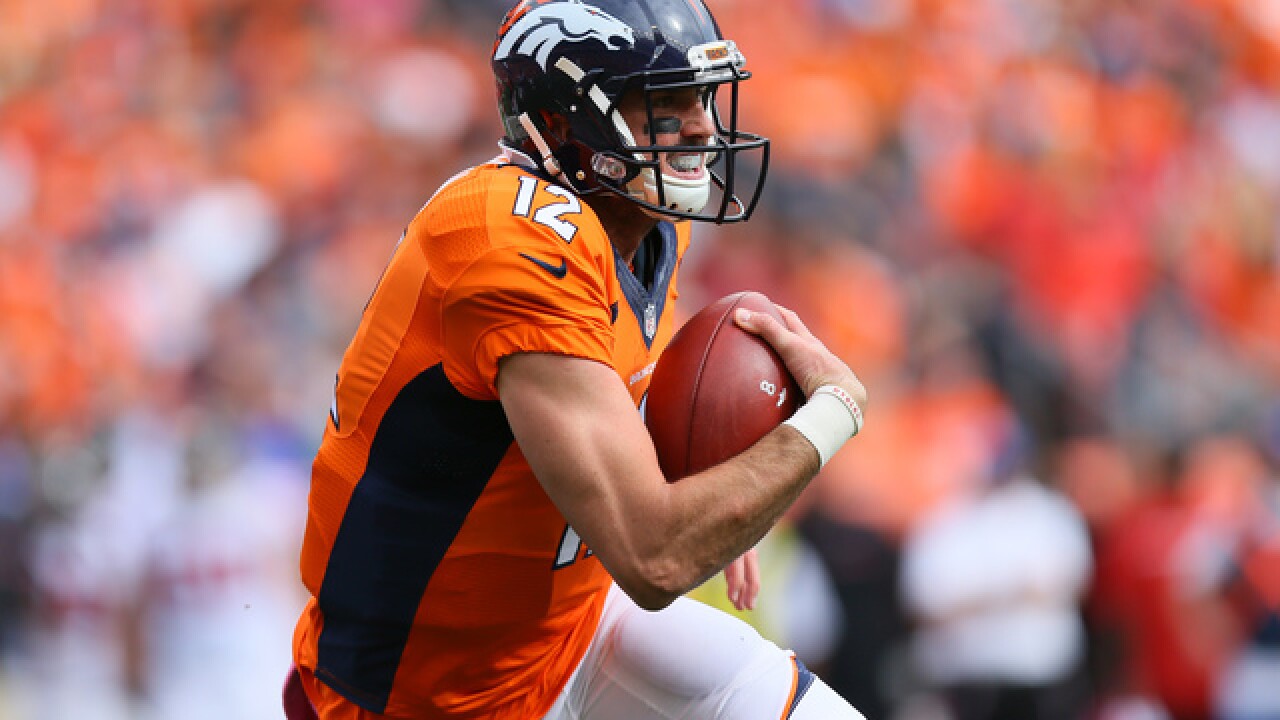 Justin Edmonds
<p>DENVER, CO - OCTOBER 9: Quarterback Paxton Lynch #12 of the Denver Broncos runs with the ball during a game against the Atlanta Falcons at Sports Authority Field at Mile High on October 9, 2016 in Denver, Colorado. (Photo by Justin Edmonds/Getty Images)</p>

DENVER -- Here’s the good news: Despite being demolished by the Raiders on Sunday night, the Broncos are the fourth best team in the AFC.

Here’s the bad news: The Broncos must play four of their seven remaining regular-season games against the three teams ahead of them.

Here’s the good news: The Broncos will play three of those games at home.

Here’s some more bad news: The Saints, the Broncos’ next opponent, have won four of their last five games and are averaging 30 points a game this season. The Broncos have scored as many as 30 only once.

Here’s the worst news: The Broncos are regressing, not progressing, on offense, and the defense is getting unhealthier every week.

Denver at New Orleans is not a trap game; it’s a setup. The Broncos are being set up to lose their fourth game in the past six.

As Broncos coach Gary Kubiak accurately pointed out on Monday, the day after Sunday Night Football, if you can’t run and can’t stop the run in this league, you don’t do very well.

Only five NFL teams are lower than the Broncos’ 3.8 yards per carry, and the Broncos are 30th in rushing yards allowed. The Saints aren't much better as a running team, but they rank second in passing behind Atlanta and just ahead of Oakland. And those two other teams beat the Broncos.

Consider the Raiders’ offense against the Broncos’ offense:  Oakland’s offensive line, especially with that six-linemen strategy, was vastly superior to the Broncos’ mediocre five-man line.  The Raiders are better at quarterback, running back and wide receiver. The combination of Amari Cooper and Michael Crabtree has the stronger numbers combined than Demaryius Thomas and Emmanuel Sanders, and the Broncos backups at the two outside and slot positions can’t compare to Oakland’s. The tight ends are about even. Neither figure much, although Virgil Green FINALLY is factoring on occasion.

The idea of the Broncos’ strength being the running game has evaporated. Since C.J. Anderson was hurt, the Broncos have rushed for a total of 90 yards in two games. The Chargers and the Raiders finished with a combined total of 341.

Siemian is not special enough to win a game by himself, and the offensive line is not solid enough to overpower an opponent. The defeat in Oakland was embarrassing and demoralizing.

Because the AFC is rather weak overall, the ranks at this juncture would start with:  (1) Patriots, (2) Raiders, (3) Chiefs and (4) Broncos. The Broncos have to play the Raiders in the final game; they have home-and-home games with the Chiefs, and the Dec. 18 home game against the Patriots is looming and dooming.

It’s not Dante’s Inferno yet, and the Broncos don’t have to abandon all hope of entering the Superdome on Sunday (even though they’ve lost two Super Bowls there and once were shut out in New Orleans 42-0).  But they do have to flip the switch and flip the script. Coming out and throwing is not the solution, especially since Kubiak claims he wants to be a dominant running team. The Broncos, under these circumstances of three-and-out, must alternate Devontae Booker and Kapri Bibbs on every down. Bibbs did have that 69-yard pass play that really was just screen pass run for a touchdown. He showed the moves that made him ridiculous at Colorado State. Run like Spot in the second-grade reader.

Then, throw deep, even if it means four interceptions for Siemian. A deep pick is the same as a punt, and both Thomas and Sanders can go up.

Show some trickery – an Emmanuel end-around, a flea-flicker (which we haven’t seen all year), three tight ends and a fullback on the same play, more bubble screens to D.T. or a fake field goal or punt just to surprise the defense.

If Aqib Talib, Brandon Marshall and Derek Wolfe are out against New Orleans, go to more zone, more safeties and T.J. Ward more as a linebacker in the box.

And never return a kickoff out of the end zone.

If all fails in New Orleans, the Broncos will have to use the bye week to get Paxton Lynch ready and put him in the shotgun full time as he was in the game in Tampa.

This is not panic, but it’s not picnic time. The Broncos certainly are not going to reach the 12- or 13-victory plateau of the past four seasons, but they are in danger of plunging below double-digit victories for the first time since the Kyle Orton-Tim Tebow Era.